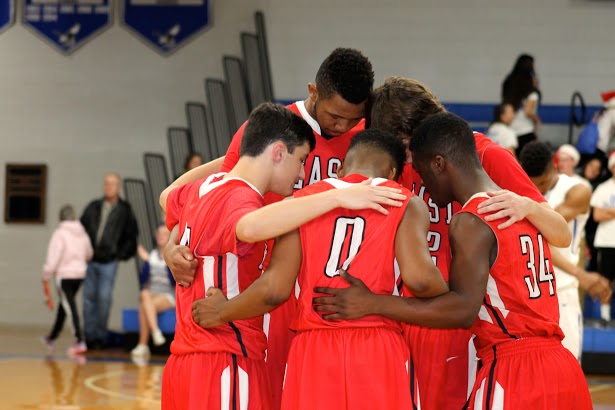 The first game of the season is an opportunity to both display the growth of the team and show the potential of the team that will play the rest of the season. A close game going into the fourth quarter on Friday, December 18, East Boys Varsity Basketball defeated Paul VI 62-48 in their season opener.

East went up on the scoreboard first as Junior point-guard Evan Campbell (’17) hit a smooth 3 pointer. From there, East set a high level intensity to hold their lead through the first quarter. However, the momentum going into the second quarter propelled PVI to tie the game at 19-19 with 4:43 left in the second. PVI pulls ahead and the first half ends with East trailing 21-20. Returning starter, Tim Perry (’16) fully embraced his pivotal role on the team in the first half as he grabbed 7 points and 10 rebounds.

Following the start of the third quarter, PVI and East exchange points for points until Olin McClendon (’16) draws a foul and makes both foul shots to put East up 38-36. PVI’s hope to tie the game is stopped short with a big turnover and East get the ball with seconds left in the third quarter. East moved the ball around the arc, and, with 4 seconds left, Campbell spots up and knocks down a three. East ended the third quarter leading PVI 41-36.

Campbell’s three pointer proved to be the spark that ignited East’s dominance of play, reminiscent of the form that drove East to a sectional championship. In the fourth quarter, East controlled the ball and effectually controlled the game. East continued to stack on points until the game seemed to be over as East led by 15 with 1:23 left. Although it took three quarters for the team to show it’s dominance, East decisively won 62-48 and now being their 2015-2016 season 1-0. East will take on Glassboro High School in their home opener at 3:45 on Monday, December 21.