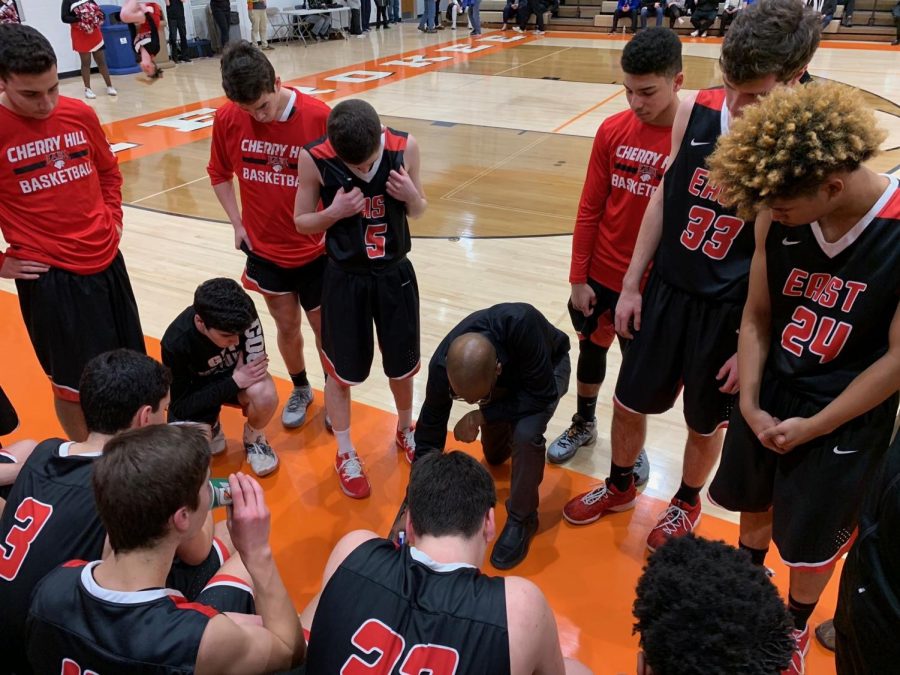 Coach Dave Allen draws up a play for his team.

In front of a nearly sold out crowd at Cherokee High School, the Cherokee Chiefs defeated the Cherry Hill East Cougars 61-38. With the loss, the Cougars ended their season with a 14-13 record. Although this is the last game for most of the seniors, the group made an impact on the basketball program. The season was marked with Carl Gibson (‘19) scoring his 1000 point and a dominating win over arch-rival Cherry Hill West. However, this game against the Chiefs did not go as planned, as the Cougars were outscored and outrebounded tremendously.

From the beginning of the game, Cherokee’s Olare Oladipo (‘19) could not be stopped. He was one of the main factors as to why the Chiefs were able to propel their way to victory. After the Chiefs won the tip, they were quickly able to score a bucket. Gibson answered right back with a three of his own. Jacob Rose (‘19) was able to muster in a layup, but after that, the Chiefs went on a 7-0 run. From there, they went full steam ahead. The Cougars closed out the quarter with a layup from Sam Serata (‘19) and Gibson, to make the score 16-9 Chiefs heading into the second quarter.

The Cougars started off well in the second quarter, with Serata and Jacob Stein (‘19) both hitting threes. Gibson had a huge block that got the Countrymen riled up, but it was not enough to fuel a major comeback. Oladipo split the defense, finishing with an and-one opportunity that he converted. The Chiefs kept rolling, finishing off the half with a score of 26-17. Serata led the Cougars with seven at the break.

The third quarter was all Cherokee. The Chiefs went on an 8-0 run to begin the half, and the Cougars were not able to score until five minutes in. Stein was able to drain back to back threes to cut into the lead. Serata was then able to sink another layup, but the Chiefs kept answering. The Chiefs led at the break, 42-25.

Once again, the Chiefs controlled the fourth quarter. Gibson was finally able to sink a layup to stop the bleeding, but the Cougars were losing by 24. He then was able to convert an and-one, cutting into the deficit. Ryan Greene (‘20) was able to drain back to back threes to cut the deficit to 21. Gibson finished off the scoring with a layup and the Cougars lost 61-38.

Although this game did not go their way, the Cougars can look back on this season and be proud of all that they accomplished. They cannot wait to take the court next season.