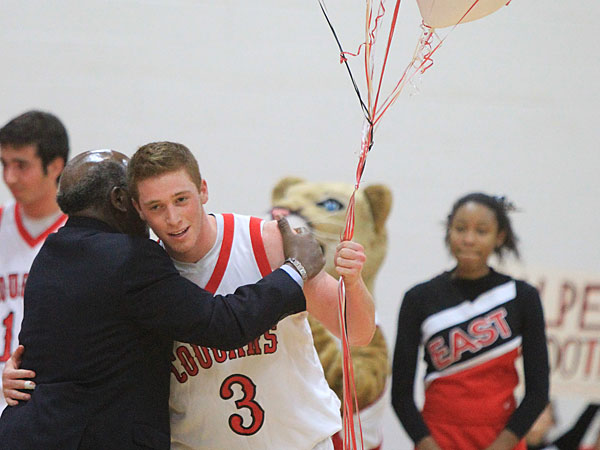 It was an upset for the PVI Eagles as Cherry Hill East took home the big win on Friday, Dec. 19. The Cougars played a spectacular game with the final score of 62-37. East’s point guard, Jake Silpe (’15) scored 15 points, which helped him reach his 1,000 career-point milestone.

PVI won the jump ball to start off its journey against the Cougars. With complete confidence that PVI brought to the courts, East brought more. Timmy Perry (’16) scored the very first basket of the game with a smooth lay-up. Cherry Hill East players then started to sweep up and down the courts like a game of pinball.

The first quarter ended with East leading a close game of 13-11. Within the first few minutes of the second quarter, Timmy Perry launched up from the hardwood and put back a slam-dunk, which awakened the countrymen.

Just before the end of the second quarter with 2 seconds left, Jake Silpe drove down the lane and completed a reverse lay-up for his 1,000th career point.

“The clock ran down and I knew I had to make a play,” Silpe said.

With his last home opener at East High School, Silpe said he is “just trying to enjoy it because time is flying.”

Lee Rosen-Swell (’16) put 3 more points on the scoreboard from beyond the arc. His “nothing-but-net” shot triggered claps and chants from the audience.

Varsity Coach, Dave Allen said his expectations were to “over-achieve” and “play game by game.”

The last quarter came to an exciting end as the Cherry Hill East Cougars defeated the Paul VI Eagles in the home opener. In the win, Timmy Perry ended the game leading the team with a commanding 22 points. Hopefully the Cougars will continue to strive for more wins with the same confidence and hard work that they showed in their first game of the season.