East basketball crushes Seneca in the first game of the season 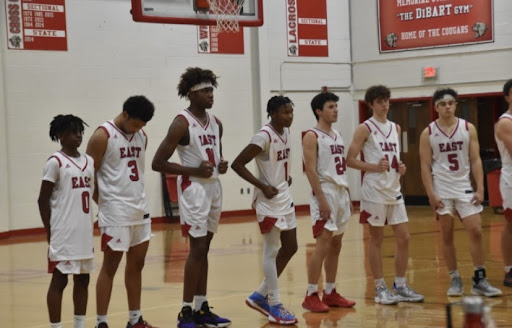 Cherry Hill East basketball team lines up before the game

Ej Matthews-Spratley’s (‘22) 20 points led the Cherry Hill East Cougars in a blowout win over the Seneca Golden Eagles by a score of 83-28 on Friday afternoon. These two teams also faced each other in last year’s season opener which resulted in a 66-39 win for the Cougars. The Cougars were successful in getting their fifth straight win in season openers while the Golden Eagles were unsuccessful in getting redemption from last year’s game.
Matthews-Spratley was electric in all aspects of the game. He shot eight for ten including four of six from three. In addition to his 20 points, he was consistently able to find open teammates as he accounted for four assists. Defensively, he was aggressive in the passing lanes with six steals while also collecting seven rebounds and a block.
“Ej is a product of hard work,” Coach Allen said. “He’s really worked hard on all aspects of his game. He is a big reason why our team is able to compete with the teams in our conference and in South Jersey.”

At https://casinorevieweronline.com you can learn and polish your gambling skills with our guides and tips and play casino games smartly with our help to win players explosive rewards.

The Cougars’ defense as a whole was superb. The Cougars held the Golden Eagles to under 30% shooting from the field while also racking up 16 steals. The defense was constantly getting a good contest on each shot and boxed them out on every rebound. If the Cougars can play defense like this for the entire season, it is going to be very hard for any team to beat them.
“I thought our defense was great,” Allen said. “The kids were very excited for their first home game in front of fans at full capacity in 20 months. It is important to note that Seneca was without their point guard and that and that really put them at a disadvantage. However, it was still a great team effort defensively.”
With the Cougars also picking up a win over Westhampton Tech on Saturday, they will be 2-0 going into their next game vs Pleasantville. With a senior-led team and championship experience two years ago, there are a lot of reasons to be optimistic about the Cougars this season.