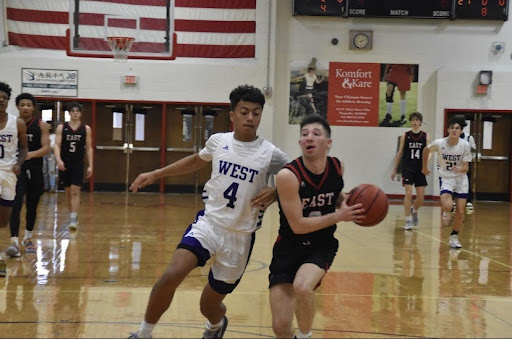 Drew Greene ('22) about to score for the East basketball team

Ian Gross’s (‘23) late game threes powered the Cherry Hill East Cougars (6-1) to a 53-47 win in overtime over the Cherry Hill West Lions (2-3) on Friday morning. This game was the finale in the annual Ginny Whittaker Classic at East. Both teams were able to defeat Willingboro and Mastery Charter on Tuesday and Wednesday before facing off in the highly anticipated game.
Gross’s clutch shooting was a big factor in the win. Shortly into the overtime period, East was down 43-41 when the Cougars got an offensive rebound and kicked it out to Gross who made the three to put East up one. After a West turnover on the next possession, Drew Greene (‘22), who finished with a team high 17 points, brought the ball down the court and passed it to Gross who made another three. The Cougars never looked back after that and were able to maintain their lead for the rest of overtime to get the win.
“It felt really good to hit those shots,” Gross said. “It was a really special moment with all the fans in a close game like that.”
The Cougars got off to a slow start to begin the game. West came out firing making threes left and right and the Cougars couldn’t make any of their own. The Cougars found themselves down seven at halftime and knew that they would have to play a lot better in the second half to win.
After a good third quarter, the Cougars really picked up their play in the fourth quarter. Greene was able to record four of his eight steals in the fourth quarter which allowed the Cougars to get easy buckets in transition. This allowed the Cougars to get back in the game and have all the momentum going into the overtime period.
The Cougars will take on an undefeated Camden Catholic team in their next game on Tuesday. This will be their first true road game of the season as all of their games so far have been at home or at a neutral site. East has shown that they can play with some of the top teams in South Jersey and Camden Catholic will be another challenge.