Discussing the new NFL policy on kneeling during the national anthem 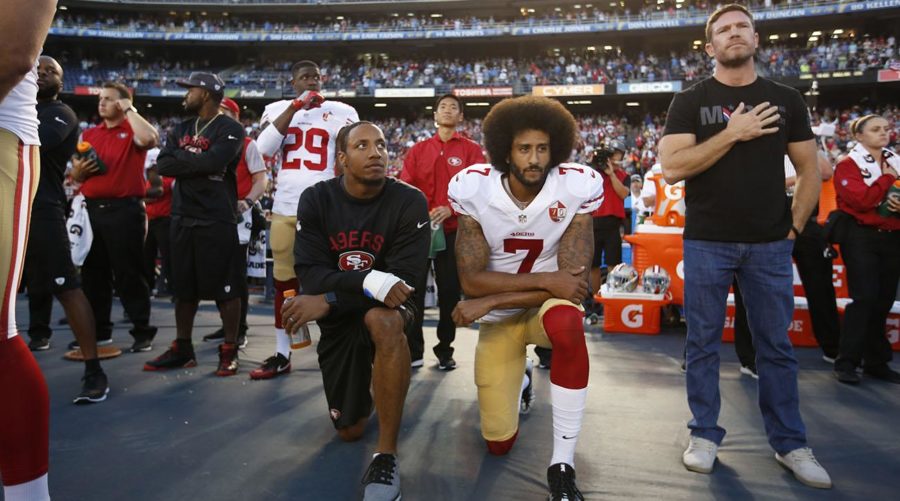 Kneeling during the national anthem was made popular after the acts by Colin Kaepernick, and has now been addressed by the NFL.

The National Football League (NFL) has made it pretty clear that they have wanted to make players stand for the national anthem.  We’ve seen those pre-game moments when an unfurled American flag all but covers the field itself. We’ve watched solemn color guard ceremonies. We’ve witnessed the roaring fighter jet flyovers. To what extent these displays are heartfelt patriotism or shrewd marketing, we cannot be sure.

This week, NFL owners found themselves with the perfect opportunity to encourage patriotism without a hint of jingoism. At issue was the two-year controversy over players who protest police violence against minorities by kneeling during the national anthem.

Patriotism manifests itself in myriad ways. The most genuine, demanding equal treatment for all, calls attention to social injustice — especially when someone pays a stiff price for protesting.

Like other private-sector employers, the league and its teams have the right to enforce workplace rules. Owners are on firm legal ground setting boundaries on the behavior of their employees. But standing up for a player’s right to kneel during the anthem would have sent the message that the NFL embraces the sometimes difficult-to-accept patriotism of dissent.

Instead, the league on May 23 opted for what it calls a compromise. Players who do not want to stand for the anthem can remain in the locker room until the song ends. But if they’re on the field during the anthem, they’ll have to stand. The league will have the power to fine teams if their players do not “stand and show respect for” the anthem and flag. Teams, meanwhile, can decide for themselves whether to mete out discipline for players who protest during the anthem.

At least one team, the New York Jets, is backing a player’s right to protest. The team’s chairman, Christopher Johnson, said no player would be disciplined for protesting the anthem and that he was willing to pay whatever fine the league imposed. It’s a stance we hope other teams will take, including our Monsters of the Midway.

Still, police mistreatment of minorities is what moved former San Francisco 49ers quarterback Colin Kaepernick to kneel during the anthem at a preseason game two years ago. By kneeling, he stood up for his principles — and paid a heavy price. He can’t find work in the NFL, though some coaches have said he could be a starter. Whether the rest of us agree with him or not, the league and its owners should permit Kaepernick’s kind of patriotism — with or without the fighter jet flyovers.

Kaepernick has since filed for collusion against the NFL because he was unsuccessful in finding a job. The same thing happened to safety Eric Reid.

Clearly some type of rules was going to be placed on the teams, but nobody expected these rules to be as harsh as they came out as. I believe that players should stand for the anthem because that anthem represents all the women and men fighting for our country. I just think that the league shouldn’t have the right to tell their players that either you can stand or go in the locker room or you are going to be fined.

Let’s wait and see what happens this upcoming season with all these rules put in place because I am willing to bet that there are going to be a few players that will disobey these rules and still kneel during our national anthem.