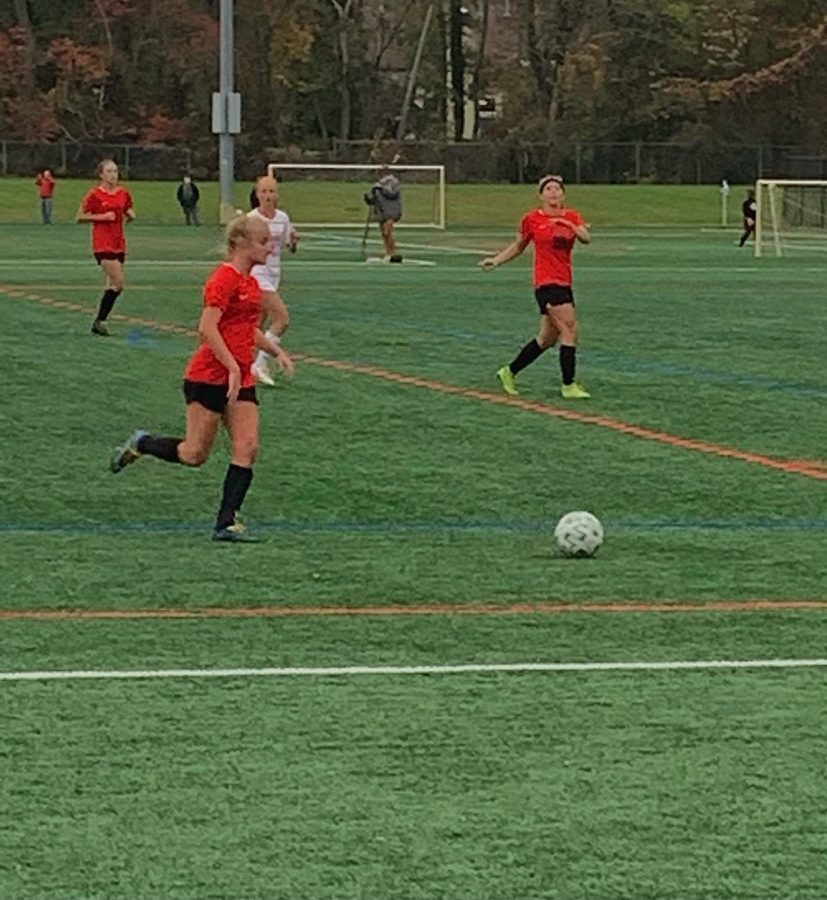 Cherry Hill East Girls Soccer endured a tough loss against Cherokee Wednesday, October 28th. East entered the Decou fields at 3:45 p.m. with a 3-5 game record hoping to turn things around. With the Cougars losing 3-5 against Cherokee, they are looking to defeat Cinnaminson later this week.

The Cougars had some sharp plays throughout the first half. Goalie Kelly Anderson (‘21) made multiple impressive saves. Between the two teams, the ball dodged from all sides of the field leaving many opportunities for turnovers. The first half ended with Cherokee leading 2-0. East was still looking to try and turn the game around during the second half.

To start off the second half, Jade Pike (‘21) head-butted the ball to Elizabeth Sommeling (‘23), sending it down the Cherokee side. After numerous attempts, Cherokee goalie Kailyn Roselli made some key saves, sending the ball over to the opponent’s side where they were able to score again leading the game 0-3 for East. Cherokee was able to maintain their momentum and scored again on East.

In the last twenty minutes, Carly Drumm (‘22) hit a corner kick, flinging the ball towards Katie Quarry (‘22) who swiftly put it in the net. This was the first goal for East and it led the game 1-4.

Near the fifteenth mark, Alyssa Bui (‘21) scored on Cherokee. Number 7, Jillian Drumm (‘21) nearly scored twice, but she over shot the ball by a little. After a couple more turnovers, Alyssa Bui (‘21) passed the ball to Jillian Drumm, who passed back to Carly Drumm, allowing Carly to score a goal on Cherokee in the last ten minutes. Unfortunately for the Cougars, Cherokee had scored their final hit, leaving the game 3-5 and ensuring their victory.

Nevertheless, East put up a tough fight against Cherokee, especially in the second half. Jillian Drumm says, “The most challenging part of the game today was coming back from a 4-0 deficit. Staying positive and fighting to stay in the game was difficult, but scoring those 3 quick goals completely changed the game.”