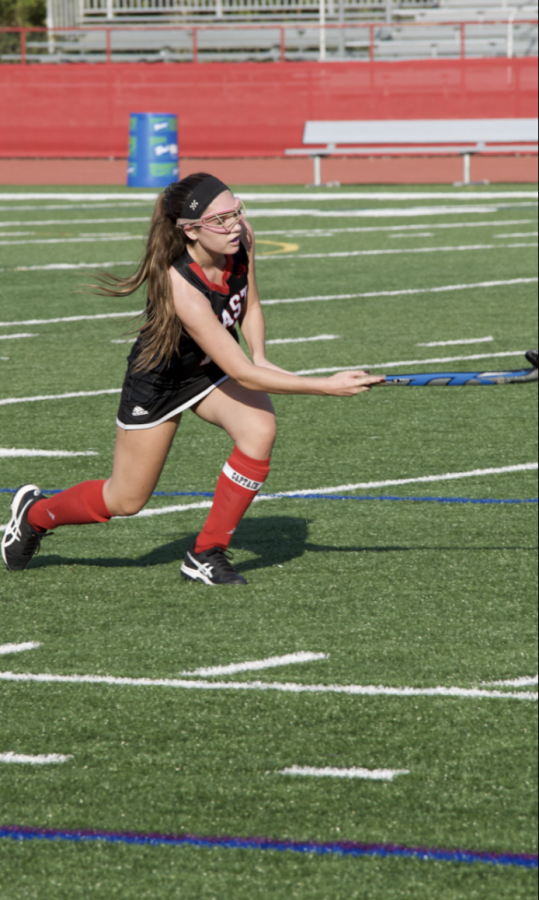 Senior Julianne Alcamo leads the attack for the Cougars.

Cherry Hill East Field Hockey suffered a 9-0 defeat at the hands of the Shawnee girls on Monday, October 5th. The East girls were coming off a 9-1 loss to Washington Township last Tuesday, but are hoping to turn things around later this week against Paul VI at home.
The Cougars had some bright moments in a game that provided few. Junior Marissa Rappaport (‘22) completed several key passes creating opportunities, while seniors Julianne Alcamo and Mary Fleischman were able to lead the attack with a couple shots on frame.
Shawnee goalkeeper Katie Fricke (‘21) made many key saves throughout the match, setting up chances for the rest of her team to dominate late in the first and second halves. Seniors Chrissy Solomen and Gianna Marmo accounted for 4 and 2 goals respectively, while Skyler Santucci (‘22) added two assists.
For East, defender Becca Allen (‘21) created many stops, preventing Renegade possession, and Aubrey Demurjian (‘21) made most of the hits off of corners for the Cougars.
The first quarter saw a competitive contest played out. Shawnee was only able to convert one goal, but they were coming off of an 11-0 defeat to powerhouse Eastern, so this goal was their first of the season.
The second quarter is where it got out of hand, as Shawnee was able to dominate play, scoring a commanding 5 goals in the second frame. Senior Amanda Frank had a goal and two assists of her own, helping her team lead this game heading into halftime.
The third quarter and fourth quarter allowed for a more even game in terms of time on the ball, but Shawnee turned their chances into goals, while East was unable to take advantage of their opportunities. Another 3 goals in the second half finished off the game for a Shawnee team that will be competitive this year.
East was without senior goalkeeper Victoria Jeffery (‘21) for the contest, but she will return later this week for Wednesday’s showdown against Paul VI.

The girls will hope to turn their season around, and have shown the ability to win some games this year.