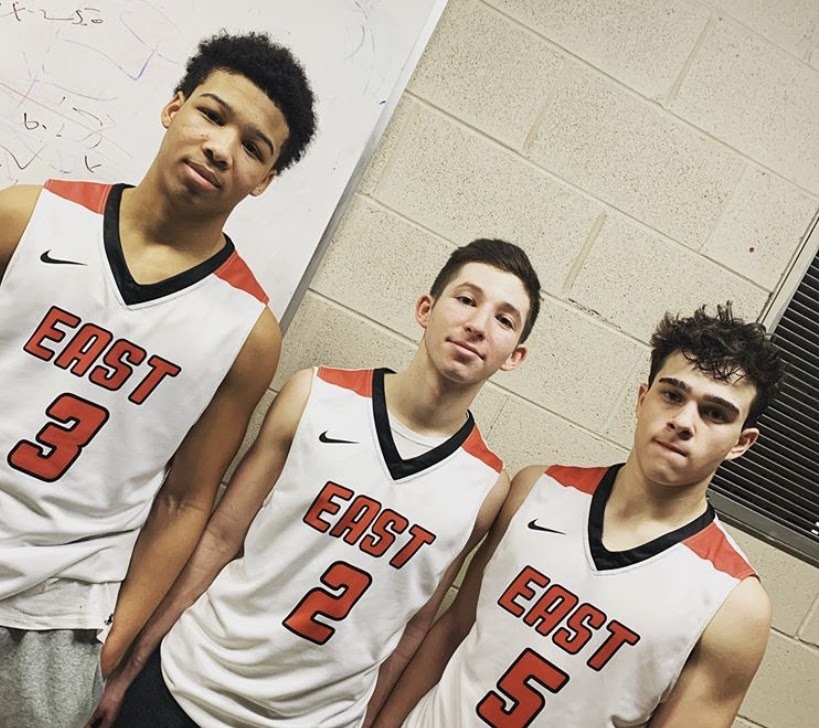 The Cherry Hill East Cougars (17-7) snapped a three-game losing streak with a three-point victory over the Northern Burlington Greyhounds (13-11) at Dibart on Friday afternoon. East held off a late fourth quarter push to seal their 17th win of the season. Sophomore, Drew Green (‘22), finished with 20 points on 73% shooting, while sophomores, E.J. Matthews (‘22) and Jake Green, (‘22) finished with 13 points each. Ryan Greene (‘20) led the Cougars with eight assists to go along with five rebounds as well.

The first quarter was a duplicate of the East Cougars’ past three games. Sloppy defense and plenty of turnovers allowed Northern Burlington to utilize their speed on the wings and size down low and jump out to an early lead. Jake Green wasn’t about to allow a severe deficit, though, as he made three three-pointers that hit nothing but net each time. Some hustle plays from the East Cougars stopped the bleeding as the Greyhounds took a 15-11 lead.

The second quarter saw a dramatic change in momentum. The Cougars we saw against Cherokee and Eastern arrived, going score for score with Northern Burlington. Drew Greene played with energy, going toe-to-toe with top senior guard Lorenzo Repack (‘20), who would finish with 22. Greene helped East expand their lead to 25-21 heading into halftime.

The second half began with more back and forth action. Northern Burlington had their size advantage to thank for staying in the game, while East had smooth shooting. Gerald Dougan (‘21) of Northern Burlington had a block party and several layups in the quarter to try and offset East’s barrage of scoring. The East Cougars started their second half attack firing from all angles and the third quarter ended 37-35 East.

The fourth quarter brought even more drama. Senior, Jarren Andrade (‘20), entered the game and hit two threes, Noah Rose (‘21) entered the game and drew a key offensive foul, all the while East saw an eight point lead shrunk to two. Northern Burlington’s shooting was neutralized down the stretch by clamped pressure put on by a feisty Cougars defense, but some shots were still falling.

East got ahead and stayed ahead with coach Dave Allen relying on clutch shooting from his players and smart clock management. With one minute left, the ball fell to the hot hand of Drew Greene who made several key free throws to give East a small cushion. With three seconds left and a three point lead, East was three fouls below the bonus, so they fouled three times in a row to give Northern Burlington 0.5 seconds to catch and shoot off an inbound. Northern Burlington completed a pass, but was well off on the shot to seal the game.

East has a tough contest coming up against 18-6 Paul VI at Dibart on Monday the 24th. Paul VI is coming off a 25 point victory that handed Moorestown their second loss on the year, but East is hoping to add another non-conference win to their record.