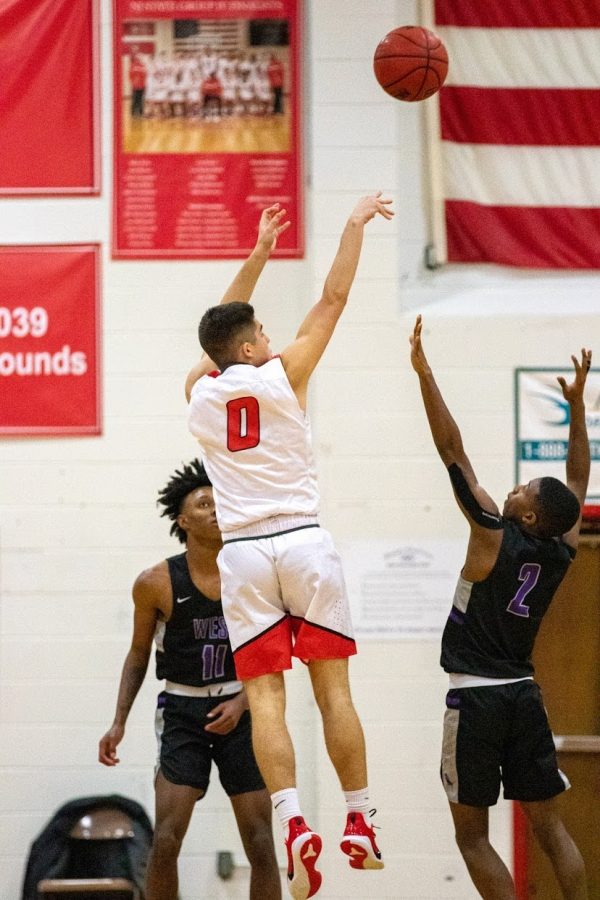 The Cherry Hill East Boys Varsity Basketball team gritted out a two-point victory in the second matchup of a four-game classic held at Cherry Hill East on Monday, December 30th. In front of a sold-out Dibart Gym, the Cougars, led by East MVP Ryan Greene (‘20), managed to defeat their crosstown rivals for the third year in a row.

Both student sections were loud throughout the game, matching the intensity of the players. Ryan Greene and his brother Drew Greene (‘22) both scored 16 points. And Jake Green (‘22) contributed with four three-pointers in the fourth hard-fought win of the season for the Cougars.

The game began with East rushing out to a 21-8 lead in the first quarter. The crowd remained on their feet play after play as Jake Green knocked down three three-point shots. East frustrated West with tight defense to set the tempo early for the Cougars.

“After coming out firing in the first quarter, we set the pace of the game,” said East Head Coach, Dave Allen.

In the second quarter, East went point-for-point with West as a couple of missed free throws and a 5-0 East run to end the half gave the Cougars a 28-15 lead.

However, “we knew they were going to make a run,” said Allen.

The run came in the third quarter, as a 13-point East lead was cut down to a five point lead. West made defensive adjustments forcing East to play their physical brand of basketball. East rose to the occasion, though, as Drew Greene took several fouls in the paint, knocking down four free throws over the duration of the quarter, and re-igniting East down the stretch.

With a 36-31 lead heading into the fourth quarter, the fouling from both sides continued as neither team was willing to relinquish momentum. West tied the game at 36 with only six minutes remaining. However, a backcourt violation and a pair of free throws from Drew Greene swung the momentum back in East’s favor.

Soon after, the East half of Dibart Gym erupted as E.J. Matthews (‘22) connected on a clutch corner three to give East a four-point lead. On the next possession, Ryan Greene spun between two West defenders and rolled the ball in off the glass to expand the East lead. Yet, West would claw their way back and make it a close game with little time remaining, with a couple of baskets from Hakim Melvin (‘20) and Jordan Lipford (‘20).

However, Jake Green sealed the deal with a three-pointer and Matthews added a free throw made in the sophomores’ biggest games to date.

“The atmosphere was electric,” said one visiting collegiate scout, “it did not disappoint.”

Allen and the East Cougars were ecstatic as the scoreboard’s clock struck zero, mobbing together at half court, relishing in the emphatic win.

“We were very happy with how the game went, especially because of the rivalry,” said Allen.

The rest of the Dajuan Wagner Classic did not disappoint either. It was a very exhilerating evening for many students in the area.

Later that night, Roman Catholic (PA) defeated Camden High 70-59 in a primetime matchup. Many people tuned in nationwide via live stream. The Dibart Gym was rocking as each possession concluded with a miraculous play. The team was led by 6’10 Jalen Duren’s (‘22) 18 points (including seven dunks). Lynn Greer’s (‘20) 16 points also helped lead the team to success. Roman Catholic proved to be too much for Rick Brunson’s Camden High team to handle.

This is the second consecutive year that Cherry Hill East has played host for the Marquee Matchup, as it has become a prominent venue for South Jersey Hoops.