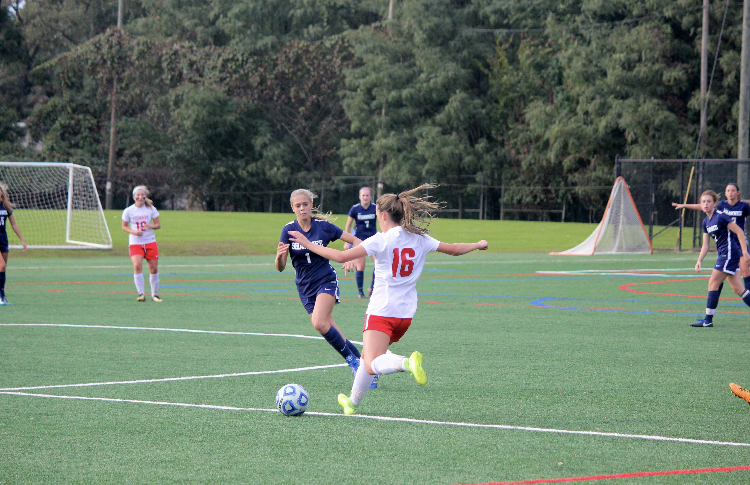 Wons passes the ball to one of her East teammates.

Brianna Wons (‘20) recently committed to Duquesne University to play women’s soccer. Duquesne is a Division I school located in Pittsburgh, Pennsylvania. Wons has been playing soccer since she was four years old and is still continuing to further her skills, primarily playing center-back for Cherry Hill East.

Wons’ main inspiration came from her three cousins, mainly her cousin Joey Malvestuto, who played for Desalles and was the captain of the team for three years.

Wons said, “[He] has really inspired me since I was little, as he will also most likely be helping me to train to become better and stronger.”

Wons continuously trains to better herself and her playing techniques. She practices every Monday, Wednesday, Thursday and occasionally on Saturday mornings. In the upcoming spring, she will be training even on her typical off days.

Wons does not only work hard training on the East field, but she regularly practices with her club team, SJEB Rush 02 Blue Academy, based out of Gloucester Township, New Jersey. She practices to adapt to different positions and is now a considerably versatile player. Wons even scored eight goals in four games during one tournament.

Wons’ club team coach, Dave Barbour, also influences her playing techniques. Barbour played in a Premier League and is a coach willing to push his players to make them the best they can be.

An accomplished player enough, Wons has still managed to receive significant attention only in her junior year. Wons has experimented with several other activities, but soccer always stuck with her.

Wons, at first, didn’t know what her passion was going to be.

She said, “I tried t-ball, basketball, gymnastics, and dance but I didn’t really like them as much.”

She knew soccer was her passion and she put effort and hard work into becoming the player that she is today. Now the sport that she has been playing for almost her whole life will be a part of her college experience.

Wons has also recognized the lifelong friends that soccer has given her. In the future, Wons is looking forward to making friends, especially with people on her college soccer team because her soccer friends are going to be her friends for life.

In September, Wons visited Duquesne to explore the school that soon enough she will attend. There she met the Duquesne coach and immediately admired his kind personality. Wons quickly fell in love with the school.

“The campus is beautiful and the view is magnificent, and not that many people go there so I am hoping to meet a lot of new people,” Wons said.

Wons cannot wait to attend Duquesne University in two years and play the sport that she loves.