Bracketology for Dummies: An introduction 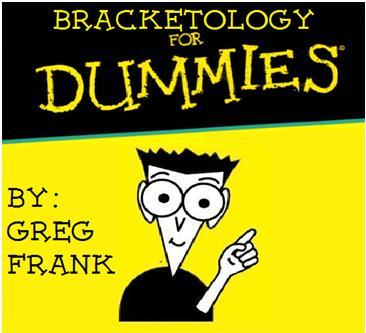 Welcome Dummies! Before I jump right into my analysis, which I will be writing every Tuesday night starting tonight, I’d like to give you some basic information that might help you out as you read the rest of this weekly column, not just tonight but in the weeks to come.

What is Bracketology? Each year around this time, late January-mid March, college basketball gurus break down all angles covering the NCAA Division I Men’s Basketball tournament giving their thoughts on who the best teams are, who the bubble teams are, the sleepers and Cinderellas, and the streaking teams.  It’s called Bracketology because it’s the study of the bracket.  The big day for all bracketologists is called Selection Sunday.  The field of 68 teams is announced and placed into a bracket produced by the selection committee, and on Selection Sunday that bracket is released to the public on National TV.  After about a month or two of the college basketball season, around this time of year, bracketologists begin to do their best to break down what fans might see on Selection Sunday.

How are the 68 teams decided? There are 31 conferences in NCAA Division I Men’s Basketball.  Each one of those conferences gets an automatic bid.  All of these automatic bids are determined the same way except for one.  When the regular season concludes, the teams in each conference are seeded and placed into a conference tournament.  The winners of these conference tournaments are placed into the field of 68.  The one exception is the Ivy League.  There is no conference tournament in the Ivy League, and as a result the team with the best record in conference play (games against other Ivy League teams) wins the regular season title, which in turn is a ticket to the big dance (NCAA Division I Men’s Basketball tournament).  The remaining 37 teams receive at-large birds at the discretion of the selection committee.

What is a bubble team? Any team whose tournament fate is unknown as to if they are going to receive one of the 37 at-large bids is known as a bubble team.  Before dissecting the bracket and who they’re picking, most bracketologists focus on the bubble teams and which ones were lucky enough to receive a bid and others that got snubbed.

What is a Cinderella team? A Cinderella team is one who tends to shock the college basketball world and make a run in the tournament.  Often times a Cinderella team comes from a smaller conference unlike the power conferences like the Big East, Atlantic Coastal Conference, Big 12, and Big 10, and didn’t really have their time to shine in the regular season and burst onto the scene in March.  Some of the notable Cinderella teams in prior years have been Virginia Commonwealth Universtiy and George Mason University, both out of the Colonial Athletic Association.  Also, Butler, out of the Horizon League, made the National Championship in both 2011 and 2010.

What is a sleeper team? A sleeper team is one who tends to fly under the radar as many people “sleep” on this team and do not think of them as a contender.  While it may sound like it is a synonym for Cinderella team, not quite.  Sleepers can come out of any conference and can have good seasons in which they received national recognition at one point or another.  The point is that they go into the tournament as a team that isn’t expected to make some noise.

*Bracketology for Dummies will discuss all of the aforementioned terms and will be divided into appropriate sections.  New columns will be written every Tuesday night.