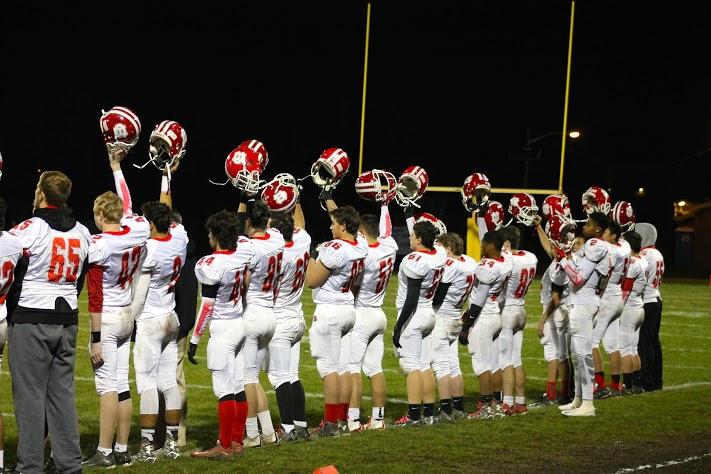 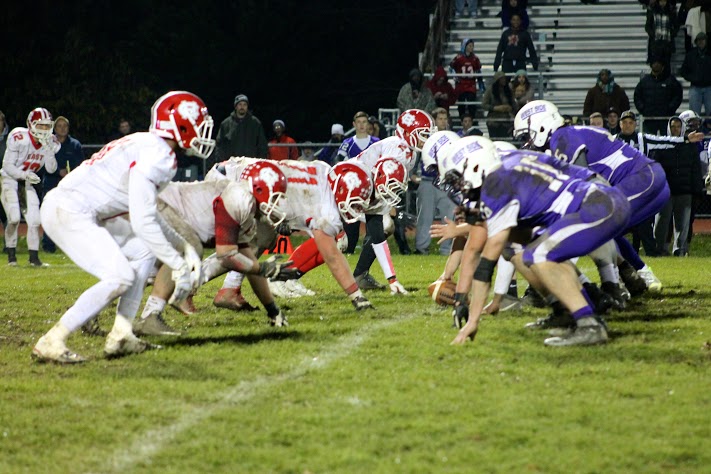 This year’s rivalry Thanksgiving football game between Cherry Hill East and Cherry Hill West ended with one of the greatest finishes in the 47-year old tradition. On Wednesday, November 25, West rallied and triumphed over East with a final score of 26-20 in a dramatic overtime conclusion.

From the start, East was ready to capitalize on any West team mishap. After the coin toss, East was set to kick off. Both teams’ fan sections roared with excitement, and East caught West on their heels with an onside kick. The bleachers were silent waiting for the referees call. East recovered the ball.

The Cougars quickly moved down the field and was first on the scoreboard as Jake Babroff (’16) punched in a 5-yard rushing touchdown. The pat was no good, and West trailed 6-0.

West could not find momentum to respond, and the East defense forced a punt on fourth down. The first quarter ended with East’s offense lurking in Lion’s territory and an East lead of 6-0.

West defense appeared formidable and created a third and long situation for the Cougars. Vinny Guckin (’16) takes the snap intent to keep East’s possession alive, scans the field, stays strong in the pocket, and throws it into West coverage. The ball is miraculously deflected off the hands of a West cornerback and caught by MJ Frazier (’16) who tucked the ball and ran for the 35-yard touchdown. East’s 2-point conversion failed, and they now led West 12-0.

West received the kick and started moving down the field. West Quarterback Andy Valetin (’16) connected twice for big gains, and the Lions were in striking distance. Valetin drew back the snap, took it on his own, and ran it up the gut for an 8-yard rushing touchdown. The pat was good, and West brought the game score to 12-7.

West runs it up the gut and breaks into the end zone. PAT was good making the score 12-7 East — Eastside Online (@EastsideOnline) November 25, 2015

East could not find the yards to get the first and so they punted with 4:04 left in the first half. The Lions scoop up the punt, and their offense springs into action. West quickly moves into East’s red zone, but were confronted by a brick wall of defense. After a big sack, West faced third and long with less than two minutes left in the first half. Valetin scrambles out of the pocket with an East lineman on his heels and throws the ball, which is intercepted in the end zone. East runs down the clock, and the rivals headed into halftime with East leading the game 12-7.

East intercepts the ball in the end zone? 1:18 left East ball on their own 4

At the half, East Junior, Miles McLeod (’17), had nine carries for 39 yards, and Guckin went 2-for-2 passing for 50 yards and a touchdown. It is clear that this East team is dramatically different from the one seen in the past few games. West kicks to start the second half. The Lions’ defense does not permit any yardage. Guckin scrambles out of the pocket trying to connect on third, but he cannot escape the rush and is brought down behind the line of scrimmage resulting in an East punt. An exceptional punt floats and stops inside West’s own 10-yard line. East defense holds strong and West remains in a precarious position with their end zone on their heels and the Cougars pushing from the front. In a strategic move, West takes a safety rather than punting the ball in their territory and giving East a good field position. East leads West 14-7. Following the safety, West punts the ball out of bounds around the half field. Guckin snaps the ball, tucks the ball, and explosively rushes for a 43 yard touchdown. The pat was no good, and West continues to trail with a score of 20-7. East attempts to catch West offguard for the second time, but the onside kick fails, and West retains possession. The third quarter ends with West knocking on the end zone’s door, but East still leads, and the score remains 20-7.

After the Cougars play a shutdown defense in their red zone, they force a turnover on downs. The home bleachers goes silent as though the game was over.

It was East’s ball on their 5 yard line. East is leading by 13 points, and the game’s clock ticks on. After getting to the first, Guckin snaps the ball and turns to hand it off, but East loses the ball, which West recovers within scoring distance. The home bleachers are electrified with excitement.

West, with determined force, pushes into the end zone and makes it a one-possession game. East holds on to the lead at 20-14 with 9:48 left on the clock.

West surprises a complacent East special team with an onside kick. Silence again looms over the stadium while the fans wait in anticipation for the refs ruling on the field. Pandemonium ensues as the ref calls it a West ball. However, following the onside kick, West kills it’s own possession with a holding penalty and an intentional grounding penalty which forces the Lions to punt on fourth down and 30. Both teams struggle to get their offenses moving, and they exchange possessions until there are less than two minutes left in the game. In an astonishing play, West quarterback, Valentin, throws the ball deep down the field, which is then tipped between a double coverage, and finally caught by a falling West receiver for the completion. West knocks into the end zone with a 1-yard rushing touchdown. West now trails by 6 with 55 seconds left to play.

A miraculous catch! West goes deep down the field, the ball is tipped between three players and finally caught by a falling west player — Eastside Online (@EastsideOnline) November 26, 2015

Many fans, believing the game was over start to leave, and the bleachers slowly empty, but, for the West football team, the game has just begun.

West forces consecutive three-and-outs and, utilizing all of its timeouts to create time for a crucial final possession, has the ball at East’s 42 yard line with 24 seconds left in the game. Valentin connects with Harrison Hand (’17) for a 22-yard gain. Frantically running to the line, West spikes the ball and stops the clock with 4 seconds left on the clock. Valentin snaps the ball, and with no time left on the clock, he rolls out of the pocket, shakes off East defense’s last attempt at a rush, and heaves the ball deep into the end zone. The ball appears to be soaring out of bounds as West receiver, Quincy Jenkins (’16) surges above the East players and catches the ball for the touchdown. The score is tied at 20-20 and the game comes down to the extra point. The kick goes wide right, and the historic game is heading into overtime.

West QB scrambles and launches it with no time left! Touchdown! 20-20 PAT decides the game

The Cougars claim the first possession of OT but they fail to move the chains and their possession ends with an interception. The East defense holds off the West offense for the first three downs, forcing a fourth and long situation. On fourth down, West connects for a 21-yard gain, which brings the team into scoring position. The game concludes as West pushes their way into the end zone to score. In what can be considered a Hollywood finish, West rallied to defeat East and claim the Al DiBart Memorial Trophy, The Boot, for the third consecutive year. As it currently stands, East leads the Thanksgiving series 31-16, but the trophy has not come back to East since 2012.

West rushes into the endzone! Gameover! Final 26-20 West keeps the boot for another year #theboot