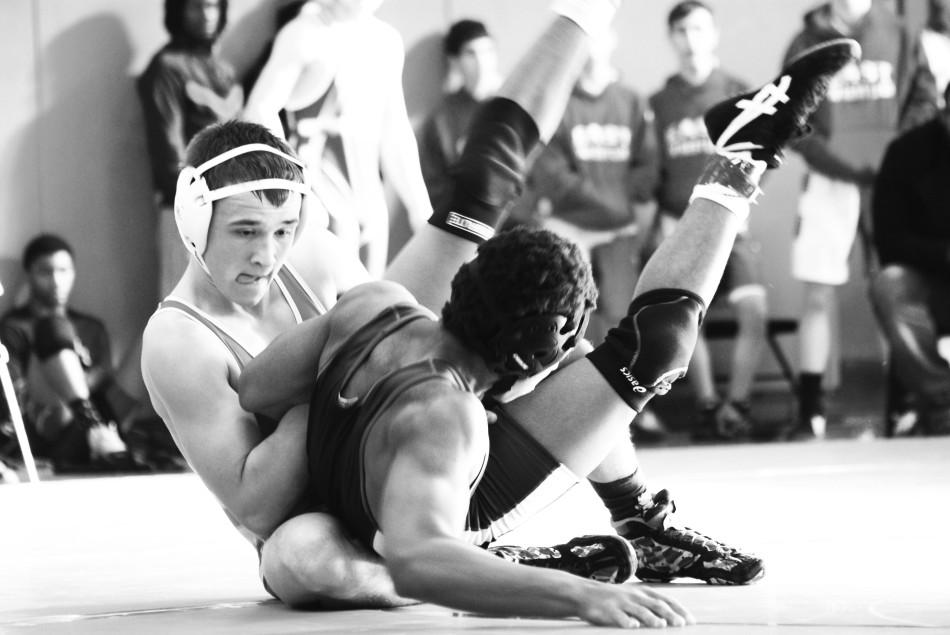 Swenson ('14) meaneuvers to pin his opponent en route to one of his many victories.

Eastside staffer Ethan Tinkelman (’16) sat down with East’s star Varsity wrestler Pat Swenson (’14) to interview Swenson about what motivates him and how he has attained his level of wrestling greatness.

ET: When did you begin wrestling?

PS: When I was three.

ET: Did you participate on a team at first?

PS: Yeah, I started on a club program; it was a midget league for toddlers, like how they do for football and baseball, but for wrestling.

ET: How long have you been wrestling varsity for?

PS: All four years at East.

ET: You have a younger brother on the team?

PS: Yeah, he is the heavyweight.

ET: What weight class are you?

ET: What work ethic must you stick to in order to reach the top of your game every season?

PS: I wrestle at least 24 hours a week, and go to the gym as much as possible.

ET: How has coach influenced you and changed you over your years at East?

PS: He has definitely made my work ethic better, and my ability is better, like being a well-rounded wrestler.

ET: Whom do you strive to take after and why?

ET: What motivates you to wrestle your hardest every match?

PS: My dad, because he got me started at such a young age, and he just wants to see me at the best I can be, and the least I can do is do that.

ET: Do you have plans for wrestling in college?

PS: Yeah, DIII. I think I may be wrestling at Wilkes University, which is ranked sixth in the nation for DIII schools.

ET: What do you do after you lose a match?

PS: When I lose, I watch the video and see what I could have done better, and look up the kids record and see how he did against kids that I’ve also wrestled.

ET: What has wrestling taught you?

PS: Wrestling has taught me to stay focused and to really work for what I want.

ET: What is the most important thing you have learned?

PS: Standing, because I had little ability on my feet when I first started.

ET: How do you feel about being the leader of a young team?

PS: It’s hard at some points, because sometimes you go to a match, and you and your brother are the only two who win, and you look at the team and they are all upset, and you are happy because you just won, so it’s hard to be the leader of a team that is inexperienced.

ET: Is there anything you can do to help them win or to teach them?

PS: Definitely. My dad video tapes all the matches and then gives them back to Brown, and then Coach Brown tells the team to work with me after practice, so I stay after practice for a half-hour, working with kids every day.

ET: Do you enjoy teaching them?

PS: Yeah, because it helps me out too because when I help the kids who don’t really understand, it helps me pick up on stuff that I could be doing better too.