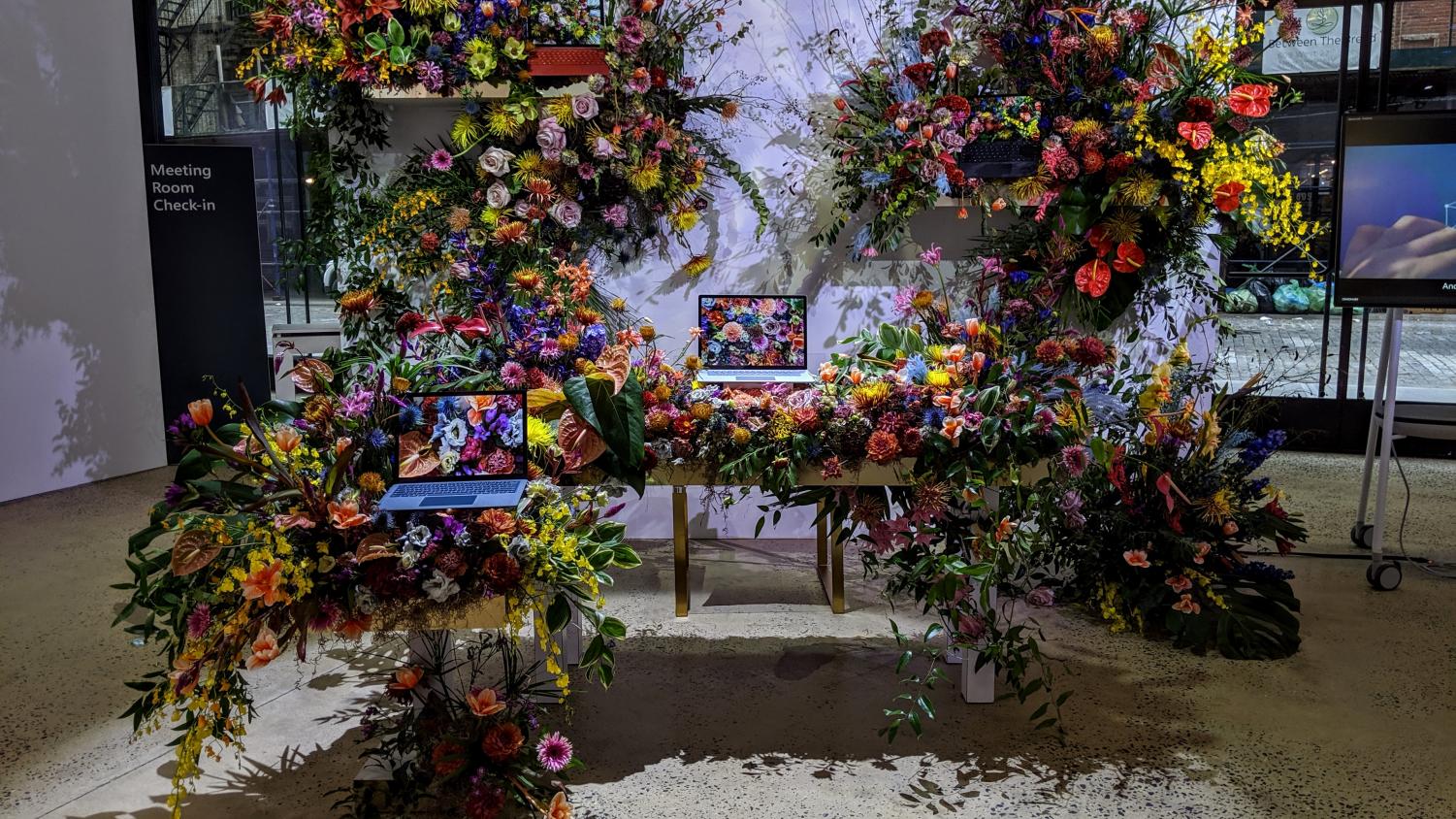 I’ve seen the future of computers, and I kind of like it. At Microsoft’s most recent October event, they showed off a few new updates to existing computers, like the Surface Pro 7, and Surface Laptop 3. But the rest, Microsoft pulled straight from the future. I don’t know if Chief Product Officer Panos Panay secretly has a time machine, but the things he showed off must be. Let’s deep dive on what exactly Microsoft showed off. 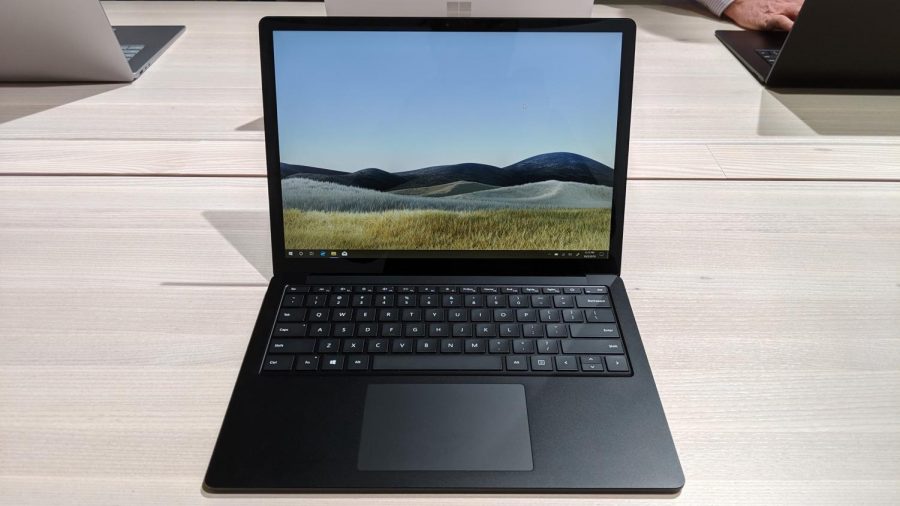 Starting off is an innovative refresh that I honestly only vaguely consider a refresh. Microsoft’s Surface Laptop 3 is a total overhaul from the Laptop 2. The new laptop features two different size models, 13.5 or 15 inches. The 13.5-inch models come in a variety of colors including Platinum, Cobalt Blue, Matte Black, and Sandstone, and the 15-inch model comes in Matte Black and Platinum. And, for the first time, the Surface Laptop now also has the option for a non-Alcantara fabric finish, for those that like a smooth, metal workspace. Another large change is the new processor offerings. Microsoft only offers the 13.5-inch model with Intel 10th generation Ice Lake processors (the latest), but they also only offer the 15-inch model with AMD Ryzen 5 or Ryzen 7 CPUs. This marks a huge change as well, since the Surface line traditionally ran on Intel processors.

One other fun update to the device is that it now finally has a USB-C port, bringing it into the modern day with other laptops. And, for those that aren’t satisfied with their current configuration, the new Surface Laptop also has a removable Hard Drive expansion bay. With all of these updates to the Laptop, I’d say this makes it one of the best laptops available today. 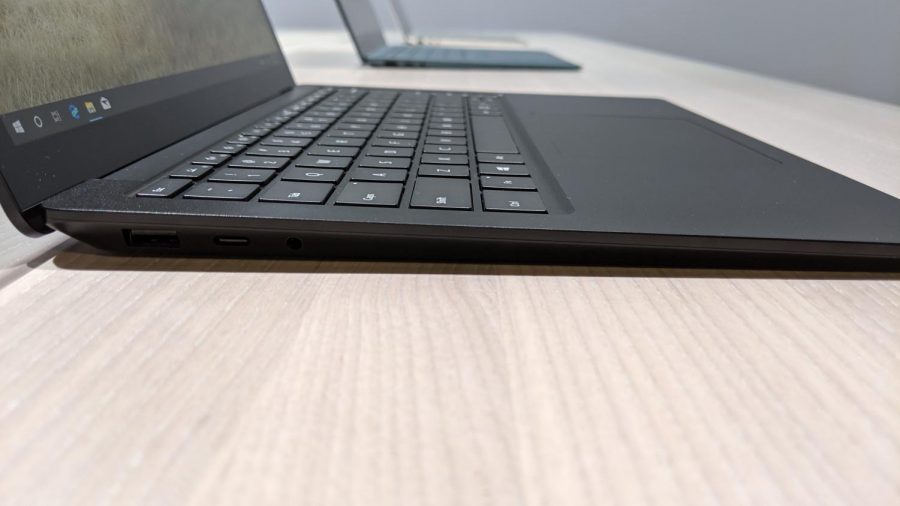 Gallery|4 Photos
Eli Weitzman ('20)
A view of the brand-new USB-C ports on the Surface Laptop 3. 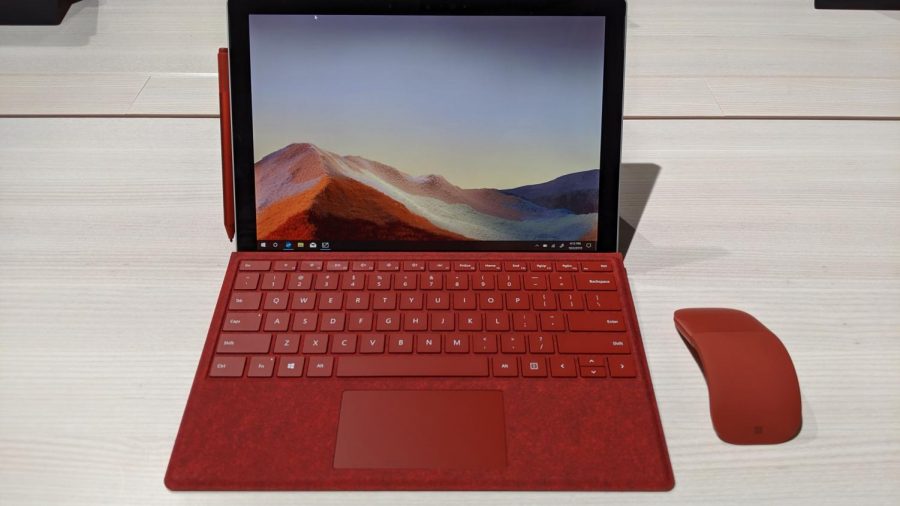 th generation CPUs, and USB-C capability as well. In addition, Microsoft created a new keyboard/pen color for the Pro, calling it “Poppy Red.” In the end, the Surface Pro 7 is only a minor update, but one that some could find extremely helpful with USB-C. 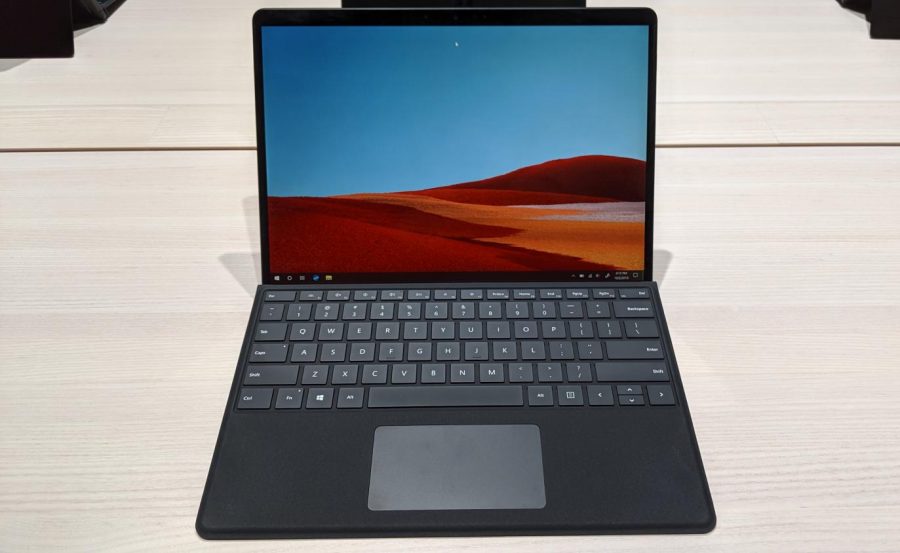 An overall view of the Surface Pro X.

This is one of the most innovative devices yet. Imagine your standard Surface Pro. But significantly thinner, lighter, and faster. Then you get the Surface Pro X. This is a brand-new device from Microsoft, featuring a similar form factor to the Surface Pro, but with a twist. The Pro X has a new pen, the Surface Slim Pen. It’s a little flatter than the Surface Pen and is rechargeable. The pen even has a devoted space, hidden in the Surface Pro X’s keyboard hinge. It hides there, and charges magnetically when not in use.

Another revolutionary part of this device it what it runs on. The Surface Pro X runs on a CPU called the Microsoft SQ1. This is a custom ARM processor, built in collaboration with Qualcomm. It’s a mobile processor that’s made to bring extreme speeds to mobile devices. Plus, it allows for two USB-C ports on the device that can each process 4k resolutions, AND a constant LTE connection (which comes standard with this device). In addition, the Surface Pro X has a removable and upgradable SSD, just like the Surface Laptop 3. In the end, the Surface Pro X seems to set the new standard for the typical ‘PC.’ 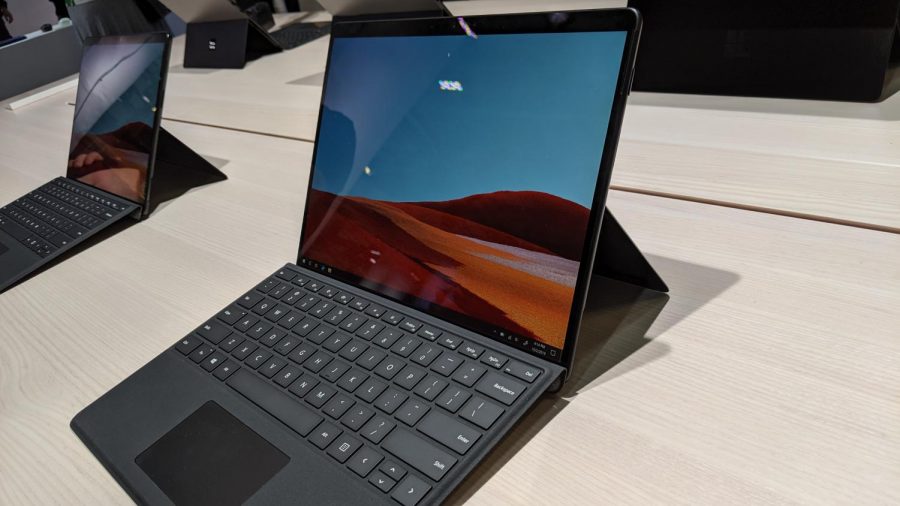 Gallery|5 Photos
Eli Weitzman ('20)
A side view of the Surface Pro X. 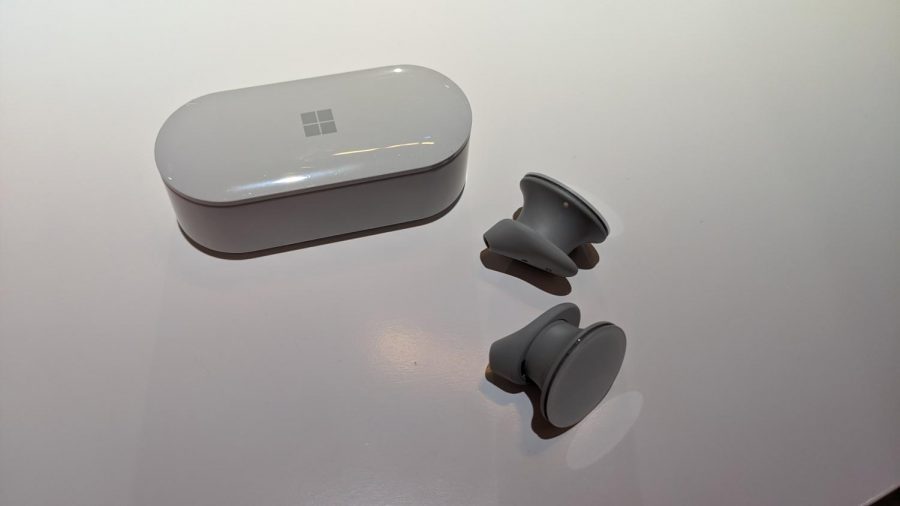 The Surface Earbuds and their carrying case.

In a long-awaited follow-up to the Surface Headphones from last year, Microsoft announced the Surface Earbuds. Imagine the power of the Surface Headphones but crammed into two small total-wireless earbuds. Plus, some new intelligent features to help you throughout your day. The Surface Earbuds are controlled by a touch-sensitive surface on the earpiece, which is on both earbuds. They also feature two microphones on each earpiece to help with microphone accuracy, and it integrates with Microsoft Office for more intelligent features.

Last year, I purchased the Surface Headphones, and was surprised by how amazing their quality was, and how intuitive they were to use. The Surface Earbuds are, in my current analysis, even better. 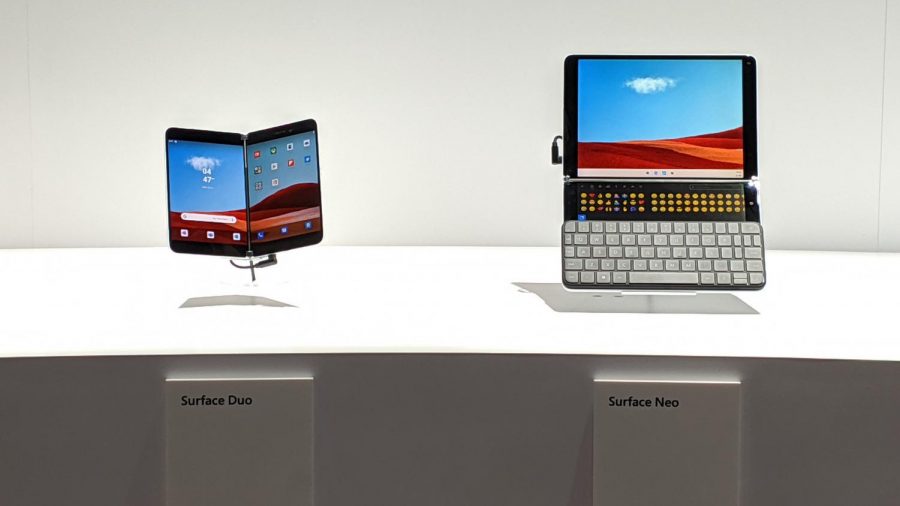 To sum it up, Microsoft has just shown us a minor update, and then a leap into the future. And I kind-of like it. 2020 now has the potential to be an amazing year in computing. And in 2019, we take the gradual step towards it. I cannot wait to see and get my hands on the Surface Neo and Duo, but in the meantime, I am (as Panos Panay puts it) super pumped!

Below is a gallery of additional photos from the event. 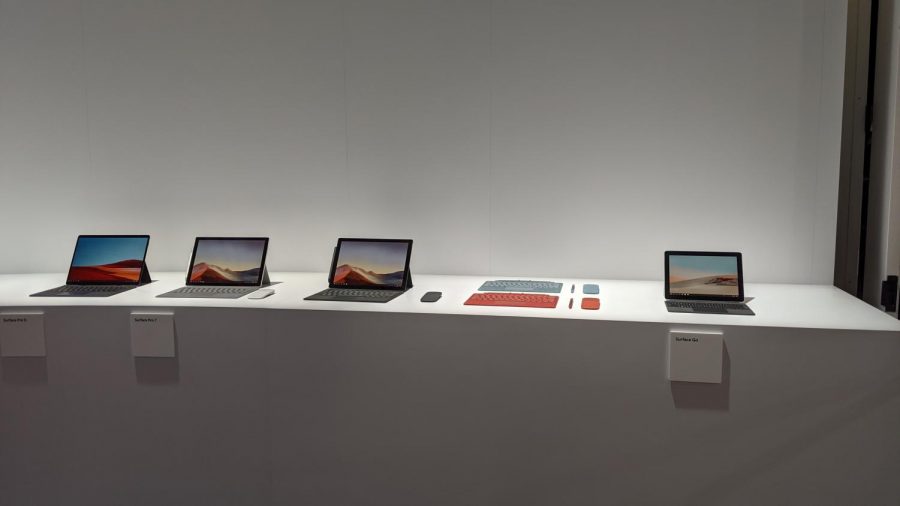