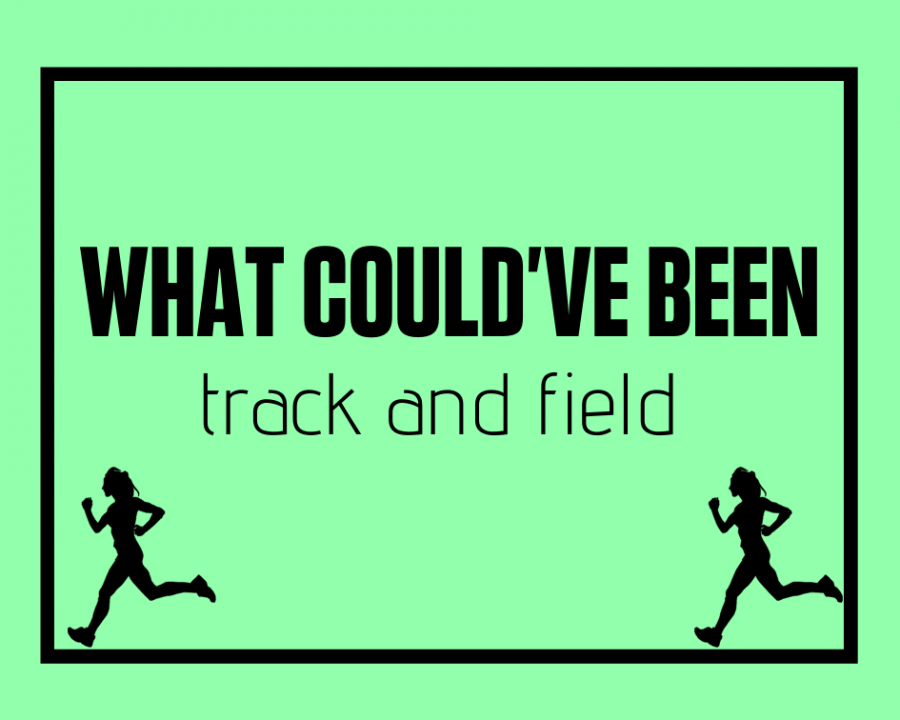 Track and Field athletes look back at “what could’ve been” if COVID-19 did not cancel the season.

What could’ve been: Track and Field

The tracks remain empty. The grass is long past overgrown. The hurdles remain untouched. The discus, shot puts and javelins are locked up in a shed, where they will remain for the foreseeable future.
Athletes are known to persevere. Whether it be in practice, training, or games, athletes always find ways to overcome the obstacles meant to keep them from achieving goals. But what if that obstacle shuts down the entire sports world as we know it?
The COVID-19 pandemic has put a halt to all forms of activity, including all sporting events. Here, we take a look at how the track and field team is coping with their latest obstacle and at What Could’ve Been?

The hopes were high for the entire track and field team at Cherry Hill High School East this spring season. Coming off of a successful winter track and field showing, the team was prepared to reach new levels of performance.

“We would have [had] nothing short of a fantastic season across the board,” said distance runner Gabe Rodriguez (‘21). “Our team has dedication and tireless passion.”

The team has several distance runners that were ready to compete for Olympic Conference titles, including Justin Whitney (‘21), Aidan Eyre (‘21), Aidan Groff (‘21) and the current state champion in the 3200-meter run, Oliver Adler (‘20).

The distance team has been preparing for this season for a long time, and if the winter season was any hint, they were going to be elite.

“We always hold each other accountable,” Rodriguez said, “we work together to achieve any goals we set for one another.”

The throwers and jumpers have had it worse than the runners during the quarantine. While runners can still, well… run, the others have had to find unique ways to train.

“You’ve got to make the best use of your time,” said pole vaulter Ken Komatsu (‘21). “Lots of leg training, core workouts and boxing helps me.”

Many members said that the team continues to be as close as possible, including thrower Paula Sawan (‘21). “Everyday the coaches send a good morning text and once a week we have a zoom call.”
Javelin thrower Robbie Fleisher (‘22) said “Our coach, Coach Bramnick, would give people certain workouts that pertain to your own event.”

Fleisher was a prolific javelin thrower his freshman season, including several throws that passed the school record for freshmen at East. But, he has another two years to show off his arm, some other athletes are not as lucky.

Senior runner Oliver Adler (‘20) was looking forward to his final races as a Cougar, but continues to train as if the season is still on. “I’ve been taking advantage of the more time I have on my hands to focus on doing all of the things that I think will positively contribute to my running ability,” he said. “We wanted to defend our county title, take back the conference championship, and be competitive on a sectional level.”

Oliver himself also had national ambitions for his running, especially wanting to break the evasive 9 minute mark for his 3200-meter race. But the camaraderie that is missed is being replaced by different types of support.

As a team, the members continue to work out individually and participate in regular Google Meets to do ab workouts together.

“We were ready to have an exceptional season,” said sprinter Jordan Grossman (‘21). “But we continue to work extremely hard on our own and over calls, motivating each other to be the best team we can be.”
Grossman and the rest of the 4×100 relay team was primed for a great finish at the Penn Relays in April. That may not be achievable now, but they are still looking forward to the future.
“I feel so bad for the seniors, but most of us still have another season ahead of us, so we need to stay focused,” Grossman said.

Several seniors, including Obinna Okorie (‘20) and Christian Torres (‘20) will leave the team with large legacies and big shoes to fill. The pandemic has been torturous for everybody wanting to stay active, but their impact goes beyond their times and distances. To those seniors who were unable to compete on their home track this year, your mark goes beyond the feats and made a personal impact on the future of East track and field.

I was told stories of pasta parties, team meetings, 10-mile runs, and a sense of unity that is hard to build and even harder to sustain. This season could have easily been a failure, but each and every teammate was able to rise to the occasion.

So while this pandemic may seem like a lost hope to some, it will live in infamy for these athletes who have had to overcome yet another obstacle.

It will forever be a story of “What Could’ve Been.”