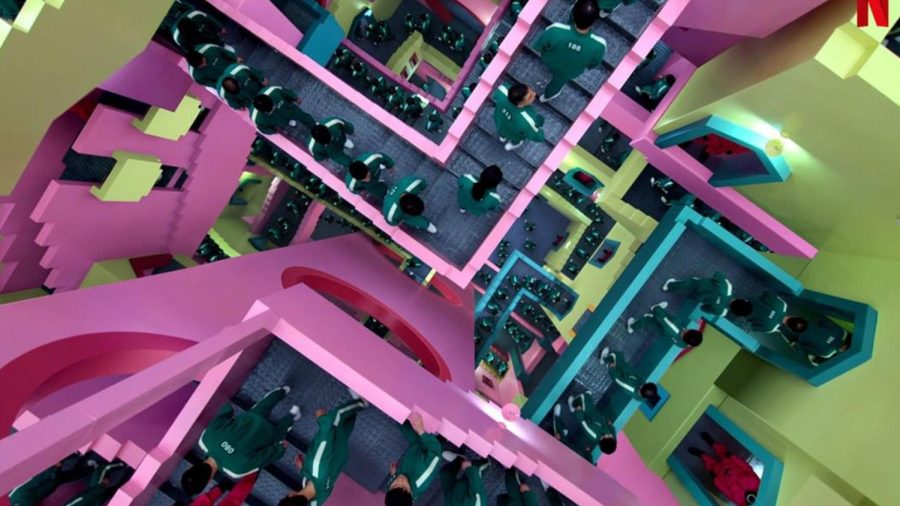 The bright, neon colors used throughout the set of "Squid Game" are an unsettling contrast to the dark nature of show.

Warning: There are some spoilers about “Squid Game” ahead. Surprise, it’s not about squids.

Unless you’ve been living under a rock, you’ve likely heard of “Squid Game”, the Korean survival-thriller series that recently skyrocketed to the center of international fame and popularity. Released on September 17th, the show has topped the viewership charts in multiple countries and surpassed Bridgerton to become the most watched Netflix show in history, racking up over 1.6 billion hours of views in the process. With its creative spin on the classic battle-royale trope, meaningful themes, and a captivating set design, it’s easy to see why the show took the world by storm.

The premise of “Squid Game” is simple: 456 cash-strapped participants are gathered together to compete in a series of childhood playground games for a prize of $45.6 billion won (equivalent to 38.6 million U.S. dollars). Although this may sound like the concept of some reality-competition TV show, the stakes for these players are much, much higher than in any game show you’ll find on CBS or Lifetime. Elimination in “Squid Game” doesn’t mean simply being sent home, it means meeting a gruesome death on the spot.

The protagonist of the show is player 456, Seong Gi-hun (Lee Jung-jae), an unemployed and severely indebted man who wastes his days away dodging loan sharks and betting on horse races. At the lowest point he’s ever been, Gi-hun takes up an invitation to join Squid Game in a desperate attempt to win enough money to provide for his ailing mother and redeem himself as a good father for his young daughter, Ga-yeong. Despite this somewhat noble motive, Gi-hun is certainly not your cookie-cutter protagonist. In fact, he’s kind of a scumbag. As we see in the very first episode, he hasn’t exactly been a responsible parent and also often mistreats his elderly mother, even stealing money from her in order to fulfill his gambling addiction. However, the absence of a hero within Gi-hun is exactly what makes him realistic and interesting to watch. Lee Jung-jae’s performance elevates the complexity and likeability of the character: he makes Gi-hun easy to empathize with despite all his flaws and also brilliantly captures Gi-hun’s internal conflicts as he struggles to survive the games without destroying his conscience.

Gi-hun is not the only person who struggles with keeping their morals as they advance deeper into the competition (let’s face it, for most people, ethics pretty much goes out the window in a game like this one). With the threat of elimination looming over them in every game, the players’ line between right and wrong grows blurred and they become willing to cheat, kill, and betray one another in order to emerge on top. For example, in the glass bridge game, players don’t hesitate to push those in front of them down in order to figure out which glass tiles are tempered and which are not: they quite literally sacrifice others for their personal gain. “Squid Game” explores greed, selfishness, and the dark side of human nature, begging the question: in a game of life and death, just how far are we willing to go to save ourselves?

Not only does the show delve into the aspects of human nature, but it also sheds light on the lives of Korea’s financially destitute lower classes — the poorest of the poor. What sets “Squid Game” apart from many of its battle-royale predecessors (including “The Hunger Games”) is that many of the players in “Squid Game” willingly choose to take part in the games, even after becoming fully aware of the consequences of losing. For these impoverished players, a deadly game that gives them only a slim chance to make a fortune is preferable to the seemingly hopeless life that awaits them outside the game, where they are chained down by their debt and circumstances as well as the rigidity of the South Korean social ladder.

In terms of set design, “Squid Game” absolutely knocks it out of the park. Visually, the entire show is truly a masterpiece and manages to be both disturbing and captivating at the same time. Neon colors and decor reminiscent of a child’s playroom fill the game complex, providing a stark contrast to the twisted games and grisly deaths that take place there. Watching player after player succumb to a grotesque end while surrounded by oversized playground equipment and wallpaper with crayon clouds is very unsettling, even more so than if the scenes had taken place in a typical horror movie setting. Seeing things that you associate with happiness and innocence be so gruesomely twisted is extremely emotionally jarring and impactful for viewers. It adds a deeper layer of horror and anxiety to the show that other typical death-game shows don’t have.

In an interview with Variety, production designer Chae Kyoung-sun revealed that the set was designed to invoke nostalgia among South Korean audiences, which means there are many references to Korean culture that western audiences may not have picked up on. For example, the most common color for school tracksuits in South Korea is exactly that of the iconic green tracksuits worn by the players in “Squid Game”. As for the (terrifying) giant doll in the “Red Light, Green Light” game? It’s actually modeled off of “Chulsoo and Younghee”, a duo of characters often featured in ‘80s Korean school textbooks. Furthermore, the show’s mint green and neon pink color scheme was inspired by the colors often used for children’s school supplies back in the 70s and 80s. “Squid Game” constantly twists and distorts images from players’ childhoods, forcing both players and viewers into a constant juxtaposition of fear and familiarity.

Cultural allusions may not be the only thing international audiences are missing out on, since Netflix has recently come under fire for botching the English subtitles for “Squid Game” as many Korean-speaking fans have pointed out that the English subtitles don’t always match the nuances of the original Korean dialogue.

Nevertheless, even though some of it may have been lost in translation, “Squid Game” definitely lives up to its recent hype and is well worth a watch. Not only does the series feature incredible cinematography and set design as well as a fantastic score, but it also offers meaningful commentary about socioeconomic issues and the truth about human nature.