Remembering celebrities who passed away in 2020 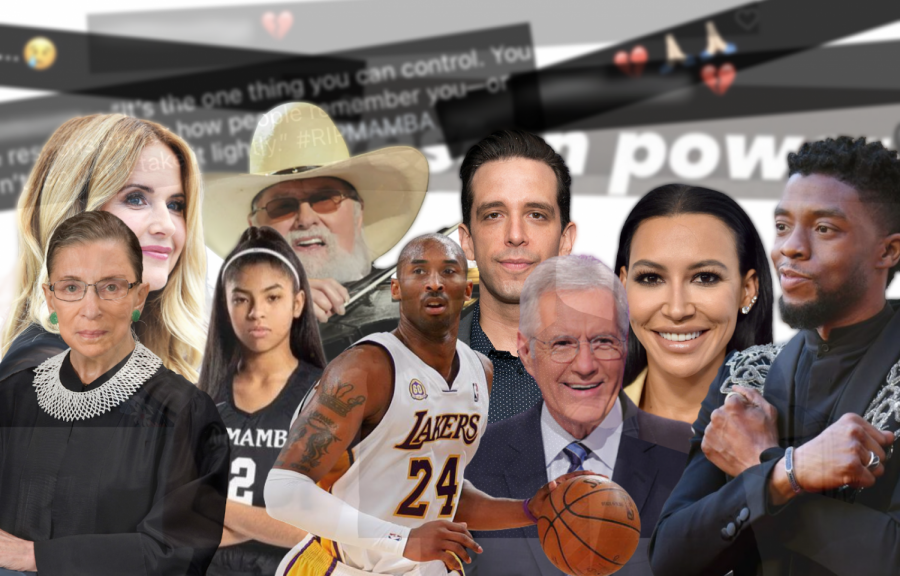 2020 has been a sad year for everyone as the whole world underwent a global pandemic to months in quarantine. Several people have died this year, as society has lost many great celebrities and contributors to the entertainment world. As a result of the virus and hundreds of thousands of deaths, people are looking forward to putting 2020 in the past.

It is important to commemorate everyone who we lost this past year. Many have changed our lives and world for the better. These deaths truly affected many people that either knew them personally or idolized them. All of the following individuals share a common characteristic: devotion to creating art and happiness in the world. Not only have these people made an impact on people around the world, but they have impacted many students here at East, too.

Alex Trebek was most known for being the host of a hit tv show, Jeopardy. Trebek passed away due to complications from pancreatic cancer on November 8, 2020. He was the host of Jeopardy for more than 30 years, and sadly died at the age of 80. Trebek’s spirit and liveliness will never be forgotten.

Another extremely devastating death this year was Ruth Bader Ginsburg, or RBG. She died on September 18, 2020, at the age of 87, also from pancreatic cancer. RBG paved the way for many women. She was the second woman on the supreme court and a major role model. In addition, she was the first Jewish woman in the supreme court. Overall, Ruth Bader Ginsburg was a leader and an amazing woman. She is an inspiration to young girls, and she truly was a wonderful woman. She will go down in history as someone who refused to back down, whether it was during her college years at Harvard or as a lawyer presenting her case to the Supreme Court.

At 43 years old, Chadwick Boseman died very unexpectedly on August 28, 2020 of colorectal cancer. Boseman was the star of the popular Marvel movie, “Black Panther.” He’s also known for his breakthrough performance of Jackie Robinson. He too was a wonderful man and another soul that will never be forgotten.

Naya Rivera’s death was truly one of the most heartbreaking moments in all of 2020. The death itself truly took a toll on many people’s emotions. Rivera died on July 8, 2020, and how she died still remains a mystery. Her five year old son is now living with his father, Naya’s ex-husband, and his aunt, Naya’s sister. Naya Rivera is famously known for her role on Glee as Santana Lopez. The character she played is considered to be a role model as she faces her very religious family while coming out in high school. Many posted about what a great woman she was and how they would never forget what a delight she was.

Nick Cordero died on July 5, 2020, at the age of 41. He is famously known for his role on Broadway, as well as his astounding talent. He died due to the coronavirus. Cordero evidently has a wide and amazing fan base as many shared their condolences to his family.

Another devastating death was Charlie Daniels, who died from a stroke on July 6, 2020. He was a singer-songwriter who was very successful. He died at the age of 83. He will be very missed by his family and large fan-base.

A huge part of the media this year was the death of Kobe Bryant and his 13-year-old daughter Gianna Bryant. Kobe Bryant was an extremely successful basketball player for the Los Angeles Lakers.

“I think the loss of Kobe was even more impactful on the younger generation. He served as a hero and role model for millions of kids who grew up watching him. I’m just thankful I was able to witness one of the most prolific athletes ever,” said Zach Schriber (‘22).

Kobe died at the age of 41 in a helicopter crash on January 26, 2020. His daughter Gianna was also on the plane on the way to her basketball practice. She died at the age of 13. This death was extremely devastating as her mother, Vanessa Bryant, lost two of the people she cared for most in the world. This was a horrible start to a year that most people couldn’t wait to finish.

These are just some of the most memorable celebrity deaths this year that will never be forgotten. There are countless other individuals who have also touched people’s hearts just as the aforementioned celebrities, who have died this year. This year was melancholy for most, and many are hoping that 2021 is filled with more positivity. We will never forget the amazing people that we lost this year.