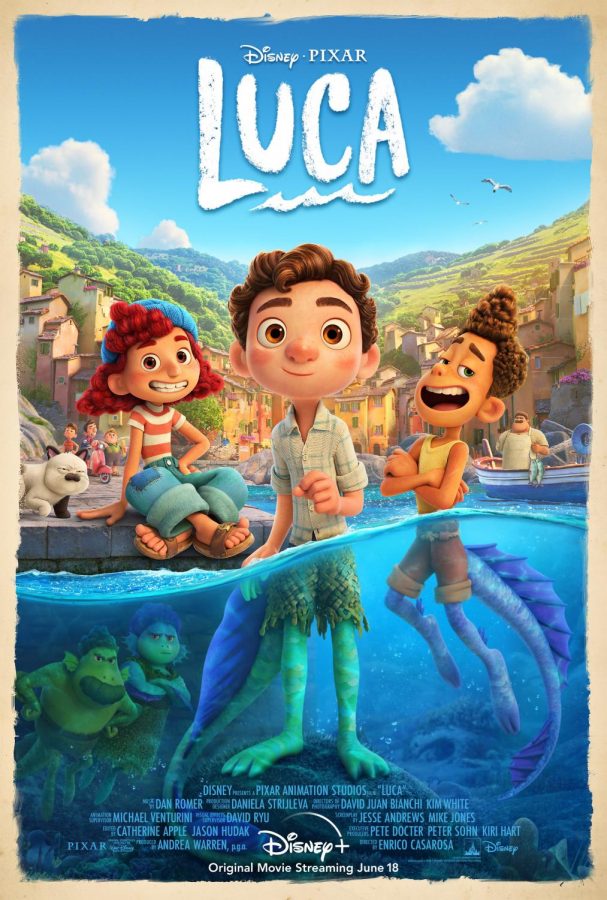 To say Pixar and Disney’s “Luca” captures the youthful essence of a summer spent in friendship and self-growth would be nothing short of the truth. Directed by Enrico Casarosa and released to Disney+ on June 18, 2021, this movie features characters Luca (voiced by Jacob Tremblay) and Alberto (voiced by Jack Dylan Grazer) who explore what it means to be the truest version of yourself with the help of their friend Giulia (Emma Berman).

Although it is not Pixar’s first movie to involve sea creatures, “Luca” is set in the Italian Riviera and features something a little different from the fish and mermaids of past films: sea monsters who naturally adopt human forms when they are not in contact with water. It’s made obvious that these sea creatures aren’t exactly welcome in public spaces but rather persecuted, and most sea creatures take an aversion to the surface as a result. Luca’s mother prevents her child from any contact with the surface, and as a result, the main character Luca views the surface as a dangerous place despite his deep-rooted curiosity in the above world. The young sea monster secretly yearns for something beyond the familiar (yet restricting) envelopes of his underwater home.

Alberto, a confident and friendly sea monster who quickly befriends Luca, lives a notably different lifestyle—one that doesn’t differ much from Luca’s in terms of freedom, as viewers learn later in the movie. Alberto encourages Luca to test the waters (or, shall I say air) and the younger boy comes out of his shell especially after he learns of the vespa. The freedom that both were subconsciously yearning for appears in the form of this motorcycle, and they dream of having adventures on it with each other.

Soon, Luca’s parents catch on to their son’s above-water activities. Afraid of being confined to the deep sea where his strange uncle (voiced by Sacha Baron Cohen) would look after him, Luca goes with Alberto off the island into town, marking the first time for both characters. That’s where the real action begins; the boys end up signing up for the Portorosso Cup, which awards the winner enough money to buy an old vespa model. They team up with their new friend and fellow “under-dog” Giulia and go up against the overgrown five-time champion Ercole Visconti (Saverio Raimondo). Through sun and rain and discovery and betrayal, both Alberto and Luca learn what it means to live as their true selves.

I’m not gonna lie when I say this movie caused me so much more emotional turmoil surrounding the kids’ friendship than I thought a Disney movie was capable of, but the level of investment I had in their relationship is unsurprising: the characters are loveable and so is their dynamic. As for the ending, the movie leaves off on a bittersweet note—I can’t think of any other way “Luca” should have closed. It immediately left me looking forward to a continuation.

A cute and comforting feature with a lot of heart, “Luca” doesn’t disappoint. Nor does the animation, which viewers call visually gorgeous. Twitter user @stevetrex42 mentioned that “Luca” is like a “golden hour vintage postcard brought to life”, and it is not a false statement.

“Luca” doesn’t aim to share an extremely meaningful, hard-hitting message to its audiences, and it’s not complicated or deeply layered (compared to, say, “Soul”, which was released not too long ago on December 25). In fact, “Luca” is Pixar’s shortest film since “Toy Story”. But while this is true, this movie isn’t your typical dollar-store family movie either; if anything, its simplicity and modesty gives it a unique boost.

So while “Luca” might not be Pixar’s best and most memorable, it is a refreshing summer film and much worth a second—or even third, fourth, etc.—viewing. 4/5, do give it a watch!