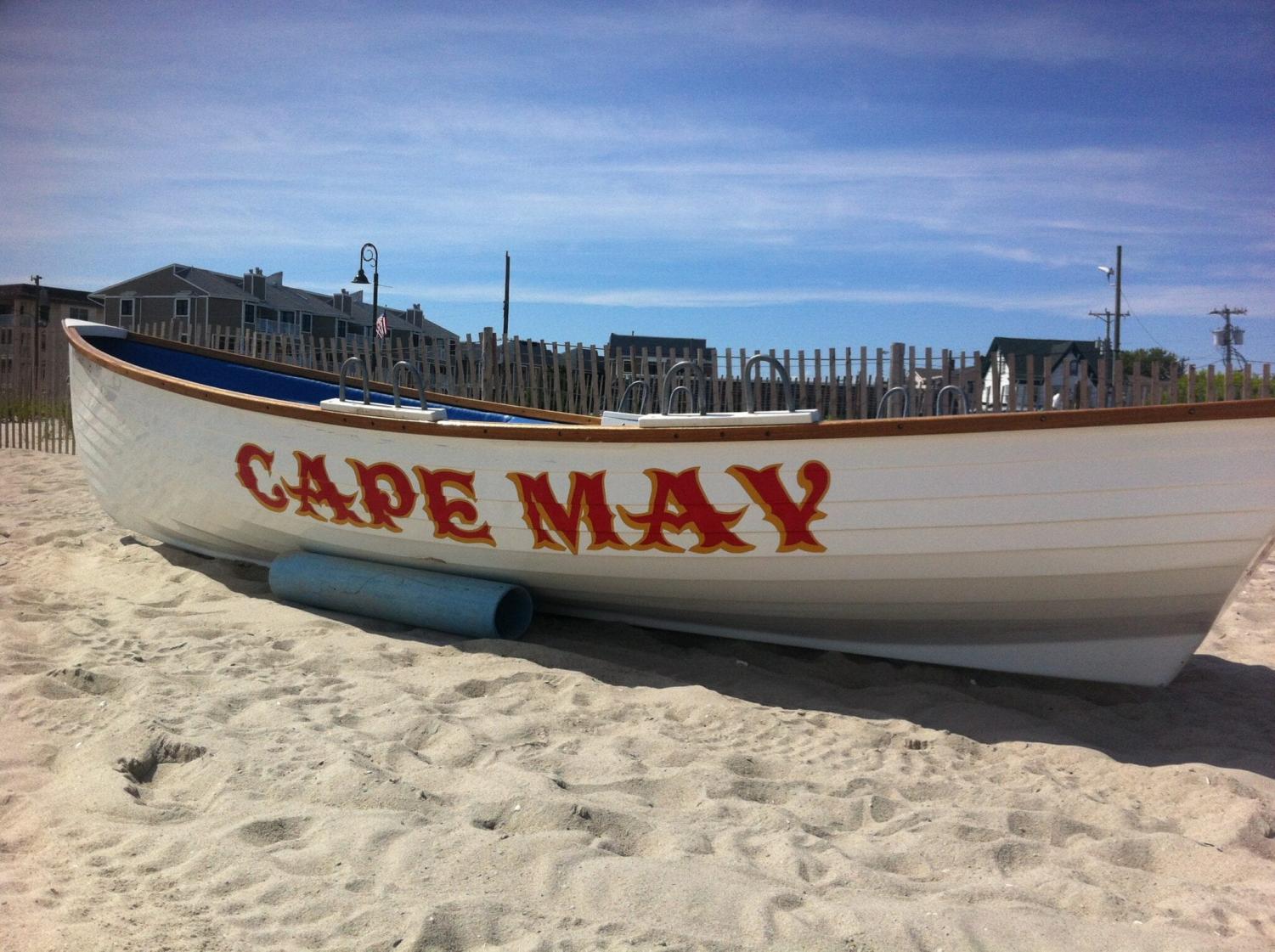 Cape May, New Jersey is a beautiful city made up of relaxing beaches and lot’s of history. (Courtesy of capemaydays.com)

Cape May, New Jersey is a beautiful city made up of relaxing beaches and lot’s of history.

A beautiful beach along the Jersey Shore is often overlooked compared to the busy beach towns such as Margate or Ocean City. This beach is Cape May, New Jersey. Cape May is filled with history and many tourist attractions. Along with its history Cape May is also known for its beautiful, relaxing beaches. This package will thoroughly explain how Cape May became this astounding city and will highlight fun places to visit on your next trip to this amazing shore town.

How did Cape May begin?

Cape May, New Jersey is a city filled with lots of history and family attractions. This beautiful beach is located at the Southern tip of Cape May, New Jersey where the Delaware Bay reaches the Atlantic Ocean. Cape May is known for its gorgeous beaches and historical sites which are great tourist attractions. This city is unique with its Victorian era houses and a long Promenade to stroll in.
The very first inhabitants of what is now called Cape May were the Kechemeche Indians of the Lenni-Lenape tribe. In the early 1600s, the first residents bought the land from the Indians. With this land, the new residents created a fishing and whaling industry. Later on into the 17th century, English colonists arrived and expanded the fishing and whaling industry. These colonists also introduced farming techniques to the land previously known as Cape Island.
Cape Island gained popularity by the citizens in Philadelphia. These citizens came to visit and traveled in horse-drawn wagons and coaches. The tourists who came to Cape Island stayed in rustic public houses, taverns, and resident homes, some of which are still in use today. People felt it was necessary to visit Cape Island for its beauty and serenity.
Cape Island expanded and attracted lots of new people from New York, Baltimore, and Washington when 6 boarding houses were built in 1834. The New Atlantic was a hotel built in 1842 which held 300 people. Eventually, Cape Island was named the Queen of the Seaside Resorts.
In 1852, the Mt. Vernon Hotel on the West end of the oceanfront was built and gained popularity. This hotel held 3,500 guests. Unfortunately, the hotel was set aflame in 1856 while it was unfinished and holding 2,100 guests. In 1859, the Cape May Lighthouse was built. This lighthouse is still standing today and is heavily visited by tourists. A railroad from Philadelphia to Cape Island was built in 1863, introducing the Cottage Era. This was an era when families from Philadelphia bought shore homes in Cape Island.
Later on in 1878, a huge fire destroyed 35 acres of Cape Island from Congress Hall over to Ocean Street. Following the fire, people in Cape May decided to rebuild the city, but scaled-down. The houses were then built ​​in Queen Anne, Gothic, and American bracketed styles, which lots of tourists find remarkable today.

In 1908, 3,600 acres of East Cape May were developed, and a Newport-like Hotel Cape May took the role of a centerpiece of East Cape May. The hotel closed 6 months after opening when the Corporation President, Peter Shields, resigned. During World War I, the hotel was used as a hospital and a base for the Navy. In 1920, the hotel reopened. In 1931, it was sold and it operated as the Admiral Hotel until the city bought the building 9 years later. A few other events occurred in the 1900s such as the Great Atlantic Hurricane which took place in 1944 and destroyed the boardwalk. This hurricane also ended the borough of South Cape May. After World War I, the Navy gave up the base to the Coast Guard. The Coast Guard then created a Training Center at this base in 1948.

In 1954, the Garden State Parkway was formed and removed Cape May’s isolation because the number of automobiles entering Cape May increased. On March 7, 1962, the March Nor’easter storm demolished the boardwalk, beachfront, Convention Hall, and many properties. Something else that contributed to the change in Cape May’s history was the visiting of Reverend Carl McIntire, a fundamentalist minister. He changed the city’s landscape after the treacherous storm by purchasing Victorian era properties. In 1963, the city received 3.5 million dollars and created a Cape May Promenade to replace the boardwalk. Also, a ferry service to Delaware was created in 1964 which helped increase the number of people coming to visit Cape May.
After Cape May recovered from destructive storms, entrepreneurs began creating stores and restaurants in this city. Also, the Victorian era homes began to be used as Bed & Breakfast Inns. In 1971, the Washington Street Mall was created. Later on, a trolley was given to the Mid-Atlantic Center for the Arts. The workers began hosting tours of Cape May and taught people about its history.

Currently, tourists enjoy visiting Cape May for its relaxing beaches, beautiful scenery, and historical sights. People delight in walking around the Washington Street Mall and taking tours to historical sights. Overall, Cape May is a beautiful city to visit for a special beach experience filled with lots of history.

Cape May is known for their exciting tourist attractions and activities. This beach provides a different experience compared to other beaches because of Cape May’s historical sights and city-like mood. Some popular attractions in Cape May include the Washington Street Mall, the Promenade, the Lighthouse, the private carriage rides, and the ferry trips.
The Washington Street Mall serves as Cape May’s town square and includes 75 establishments. This mall is filled with a variety of restaurants, famous desert places, boutiques, small shops, historical markers, bistro-style string lights, benches, gardens, and so much more. Two popular shops include A Place on Earth and Bath Time which sell bathing products and soaps. There are also some trendy clothing stores such as Beach Bum and Cape May Boutique. Kohr Bros. Frozen Custard and Ben and Jerry’s are popular ice cream places at night, but you better get there quick before the line goes out the door! The mall also hosts and sponsors events such as sidewalk sales, concerts, and parades which are fun to attend with friends and family.

The Cape May Promenade is a 2 mile long paved road along the beach. Tourists enjoy strolling through the Promenade and visiting the various businesses including candy stores, ice cream shops, and arcades. The Promenade used to be a boardwalk until it was destroyed in 1962. The Promenade was then built in place of a new boardwalk. Beach tags aren’t needed to walk on the Promenade, and it’s open to the public. Ramps are also available. There are public restrooms every half a mile as well. On the Promenade are plenty of benches, lights for the evenings, and a pavilion which overlooks the Cove Beach. Although the Promenade is open to the public, there are a few policies. Bicycles, roller skates, and in-line skates are only permitted from May 1-October 31 from 4am-10am. Dogs are allowed to stroll with their owners in the months of November, December, January, February, and March. Lastly, alcohol is prohibited in the Promenade.
Another very popular historical attraction is the Cape May Lighthouse. The lighthouse is located in Cape May Point State Park and is open from 10am-5pm. The whole building consists of 199 steps up a spiral staircase. Once tourists reach the top of the lighthouse, they will see a beautiful view of the Delaware Bay, the Atlantic Ocean, the surrounding nature trails of Cape May Point State Park, and the Cape May Point Borough. Panels are placed in and outside of the lighthouse and give information about the Lighthouse Keepers, the surrounding area, how the lighthouse functioned previously, and how it functions currently. The Cape May MAC (Museums+Arts+Culture) opened the lighthouse to the public in 1988, and since then, over 2.5 million tourists have climbed to the top. Adult tickets are $12 and child tickets are $8.
The Cape May Carriage Company offers carriage rides around Cape May while the tour guides explain facts about this cities’ history. The company offers carriage tours on the weekends in spring and fall, then daily in summer and during the Christmas season. The tours leave at Ocean and Washington Streets. One of the most popular tours is the Historic Cape May Carriage Tour which takes people around Cape May’s historic district. This tour can be either 15 or 30 minutes long, and the carriage options available to choose from are a Vis-a-vis, a wagonette, and a Cinderella carriage. Another popular tour is the Holiday Lights Carriage Tour which takes people around the beautifully decorated homes for the holidays. The 30 minute tours are $80 for 4 people and $10 for extra guests. Small children receive free admission.
Finally, another popular attraction in Cape May are the ferry trips. The Cape May-Lewes Ferry provides 85 minute cruises through the Delaware Bay, while connecting the New Jersey peninsula and shore towns with Delaware’s beaches. People can look out for historic lighthouses, harbors, oceangoing vessels, native and migratory seabirds, whales, and dolphin escorts while on the ferry. The Cape May-Lewes Ferry sails daily, and even hosts community events, festivals, and fireworks cruises.
Cape May is full of educational and entertaining attractions. Aside from these popular attractions, Cape May has a beautiful beach like no other. Cape May is so unique because it has everything one could ask for: relaxing beaches, beautiful scenery, an outdoor shopping mall, ferry trips, historical landmarks, and so much more. Visiting Cape May will always leave you feeling refreshed and relaxed.