Embarrassing Moments of Class of 2021 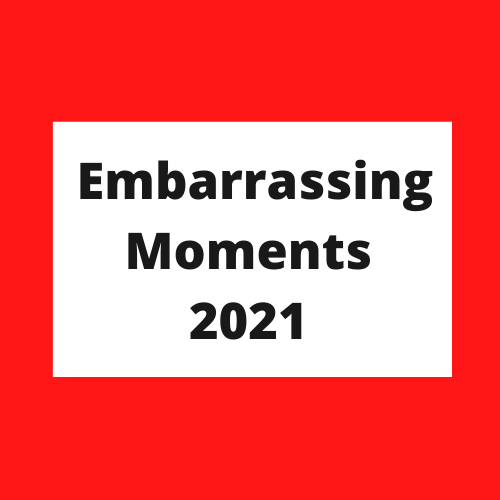 Kaitlyn Plefka
“In the spring of sophomore year, I was walking to softball practice with my friends and was holding one of my friend’s softball bags. She came up behind me and grabbed it, but at the same time I twisted my head down to see what was happening. The knob of her bat broke my two front teeth. I cried in front of the whole baseball team and softball team. I literally thought I was going to die of embarrassment from crying in front of a bunch of people, but honestly, it is my favorite story to tell, and my friends and I still make fun of it to this day.”

Claire Coen
“Oh boy! During my sophomore year, I was in East’s production of Fiddler on the Roof. During one of the last shows, I was going out for the curtain call, and I tripped on a wire that was backstage. While my fellow castmates didn’t think much of it, I was so unbelievably embarrassed. But you know what they say? The show must go on.”

Luke Consalvo
“One time, I purchased a salad and put ketchup on my salad, thinking it was the balsamic vinegar.”

Brett Tedesco
“In AP chemistry class during junior year, Mr. Falat asked the class what the blue numbers on the periodic table were, and I said liquids. The whole class looked at me. When I tell y’all I wanted to cry on the spot, I mean it.”

Anonymous
“One time, I was walking in the hall with my friend and I saw my crush. My friend started to laugh at him, then he stared at me.”

Grayson Leslie
“On the first day of school, I got so lost that the school thought I was missing, called home, and my parents almost called the police. My parents ended up texting me and realizing I was in the school. Someone was sent to find me as I wandered the halls, hopelessly trying to find my freshman health classroom. Finally, after forty-five minutes, I was saved by Mrs. Metzger and escorted to G-wing which I had passed at least eight times. It was only five minutes after I arrived at health class when the period ended and the bell rang.”

“I only went to the football games to watch the marching band, then left after the halftime show was done.”

“I was the individual who would take all of the pink Starbursts from Mr. Rouen’s food stash. Whenever I was in the office and someone would ask who took all the pink Starbursts, I would agree and say they were so inconsiderate, all while fully knowing it was me. Sorry to all my pink starburst fans.”

“I poured salt all over someone’s sandwich because I thought it was my friend’s lunch. We were in a prank war, and my prank was salting his food. I then learned when he returned from the lunchroom with his purchased food in hand, that it was not his food and I ended up salting an innocent person’s lunch.”

“This year, I showed up to school at 9:20 a.m. to be early. When I went to leave my car, I couldn’t get my keys out of the ignition. I spent forty minutes trying to get the key out of the ignition and it didn’t budge. My mom ended up driving to school to fix my car while I went to class. It turned out that I didn’t put my car in full park and my mom was able to get the key out in the matter of a minute.”

“In business class when we watched the Superbowl commercials for an assignment in class, I cried at every commercial that had a dog or animal in it.”

“Someone convinced me at DECA states that there was a competition for who could sing Karaoke best, and that the winner would earn a free Apple watch. I horribly sang Dancing Queen by ABBA in front of everyone there, only to find out I had been pranked.”

“I dressed up like Cupid for an English project and forgot to bring a change of clothes, so I had to walk around the school the whole day looking like Cupid.”

“I had to jump into the dumpster to search for and retrieve an item that costume crew accidentally threw out.”

“I had to sleep in the bathtub at DECA because my roommate was incredibly sick and I didn’t want to share a bed with her.”

Justin Fox
“Imagine being new during your senior year, and getting lost your first day in person. I went to the student entrance, trying to find my physics class in F-wing. Not only was I fifteen minutes late to class, but a freshman ended up showing me where to go.”

Emma Sklar
“One time, I threw up in math class…thanks Mrs. Mel for holding back my hair!!”

Anonymous
“I’ve called multiple teachers ‘mom’ in the past 4 years.”

Mia Bonner
“I transferred to East in my sophomore year and I was wandering the hallways for 10 minutes because I couldn’t find my driver’s ed classroom. When I finally found the classroom, I walked in and my cheeks were bright red because I had to tell the teacher I got lost in front of everybody.”

Madeline Baer
“During my freshmen year I was in the school musical and we were doing The Music Man. It was opening night and during one of our dances, I slipped and hit the floor very hard. Everyone saw.”

Saahil Gupta
“One embarrassing moment of mine was falling into a trash can at lunchtime. I was playing catch with my friends and one of them threw the ball a little too far back and I didn’t see the trash can. I fell in the trashcan in the middle of the courtyard. Another really embarrassing moment was the breakdancing performance during the spirit week dance. It was extremely underwhelming and not at all what I wanted it to be, with several mistakes as well.”

Peter Slattery
“During a hell-week rehearsal for “Shakespeare in Hollywood”, it was the end of my big scene and I had to push a desk back into position. The only problem was that I wasn’t wearing glasses and it was during a blackout so I accidentally pushed them too far off the stage. The prop 1930s camera we had got hit by the desk and slowly tipped over. It was the most painful 4 seconds of my life, and when that thing hit the floor it exploded into so many pieces. The best part was that my best friend just happened to be next to me on stage when the lights came back up for the next scene and we were just standing there, thinking did that just really happen. What made things even worse was the old theatre director, who retired the year before, came to see the rehearsal to see how things were going. Well, I’m sure it was something he wouldn’t forget.”

Gavin Palat
“When I was a freshman, I got lost going to Spanish class. I had to be walked to class by a senior who happened to be my sister’s friend.”