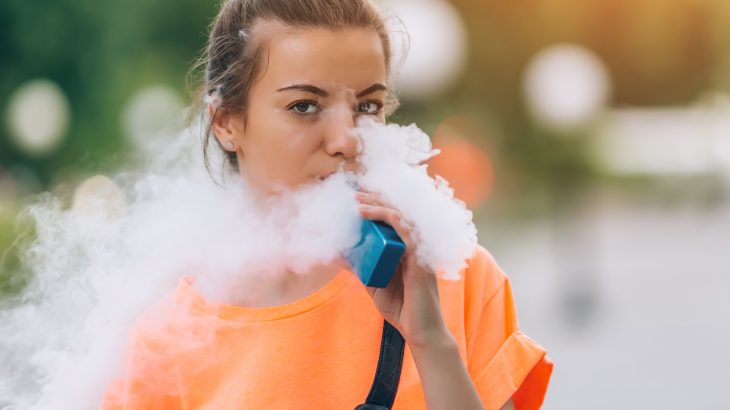 A young girl vaping, even though it is illegal if you are under the age of 18.

All across the country, the effects of vaping have been starting to emerge.  There have been 12 deaths in 10 states and 805 vaping related illnesses in 46 states. Due to this unprecedented epidemic, the Federal Government has decided to find a way to ban flavored e-cigarettes.

The Food and Drug Administration (FDA) commissioner, Dr. Ned Sharpless, spoke up in response to these recent vaping-related incidents.  He believes that the agency “should have began regulating these devices sooner.” Sharpless and the rest of the FDA seek to ban all flavored e-cigarettes off the market.

The Trump administration agrees with the FDA as the Federal Government is working hard on an enforcement policy that would remove all flavored e-cigarettes, other than tobacco, off the market. Donald Trump, Melania Trump, Alex M Azar II (the health and human secretary) and Ned Sharpless all met in the Oval Office to discuss flavored e-cigarettes on September 11th.

President Trump recognized the issue of e-cigarettes, saying, “we can’t allow people to get sick, and we can’t have our kids be so affected.”

Alex M. Azar II said that the FDA and the Federal Government will create a plan to get rid of flavored e-cigarettes.

The FDA accused JUUL Labs, the company accounting for 72 percent of the e-cigarette market, of falsely marketing vaping as a less harmful option than cigarettes in a letter on September 9th.

The FDA was referring to the company’s website saying that e-cigarettes have delivered smokers with the same satisfaction they received with smoking “without the combustion or harm associated with it.”

Another incident the FDA referred to was when a JUUL representative spoke to students at a school, stating that vaping is “much safer than cigarettes,” and that it is “totally safe.”

People have also accused vape companies, like JUUL Labs, of targeting minors, particularly students in high school and middle school. However, these companies repeatedly deny targeting students, stating that they target adults who are trying to quit smoking. However, Yale health researchers say that vaping hasn’t been proven to help adult smokers quit. Instead, vaping does the opposite; it increases the risk that teens will smoke cigarettes later on.

Furthermore, no one can deny that vaping has been overwhelmingly popular among high school and middle school students. Among middle and high school students, 3.62 million were current users of e-cigarettes in 2018. A more recent study has shown that the number has increased to approximately 5 million students.

Students may think that e-cigarettes are harmless and are much safer than traditional cigarettes, but that is not the case.  While it may be true that e-cigarettes have fewer chemicals than regular cigarettes, vape pens with the best vape gear can still contain nicotine, a highly addictive drug. Nicotine is not the only harmful substance in vape pens.  They may also contain dangerous chemicals, like diacetyl (a chemical directly linked to lung disease), volatile organic compounds, heavy metals, and ultra-fine particles that can travel deep into lungs.

E-cigarettes pose severe health risks and are slowly killing teenagers around the world.  Teenagers who currently vape are not only endangering their health, but their lives.