Testing of animals is morally wrong 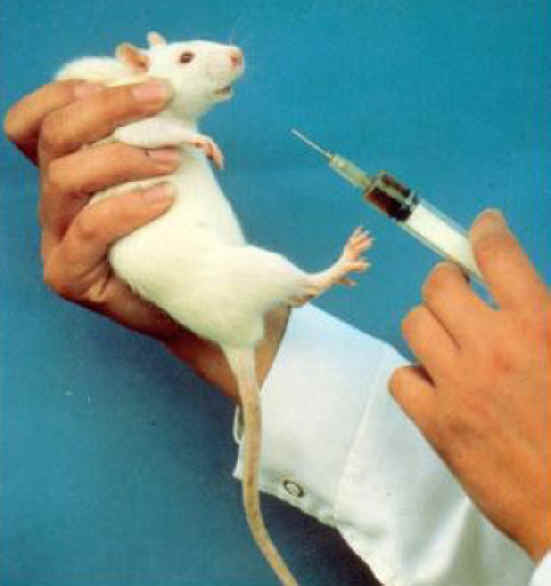 Think of your favorite animals and imagine them going through harsh, vigorous tests. Regardless of whether it is your favorite animal or not, the problem here is that annually, more than 20 million animals are tested in laboratories in the United States alone. Animals ranging from fish to the common house cat are used for research, experiments, or educational purposes. But, are these animals tested humanely?

Whether it is from dissection in class or an evaluation of the safety of a product, animals used in labs suffer throughout their entire lives.

In labs, mice, rats, rabbits and guinea pigs are commonly used but also animals such as cats, dogs, fish, birds and even horses may spend their lives in frightening environments. These animals, such as cats, live their lives getting screws drilled in their heads to measure their brain activity. Not only do cats get screws in their heads, but their eyes and ears are removed to crush the optic nerves that transmit the impulses to the brain. Other animals get products shoved down their throats just to make sure that the makeup or shampoo sold in stores is safe for everybody.

Every year, over 100 million animals used in experiments are killed. Every animal that died in these experiments was trapped in a small cage with minimal interactions with other animals. Animals that were bred in labs have never even had the chance to go outside and breathe fresh air.

Animals are tested to ensure that medications and cosmetics will work. Many of these tests are not even necessary. Labs usually do the same tests over again which leads to misleading or inaccurate results. These unnecessary, repeated tests consist of putting corrosive chemicals on rabbits’ skin, and mice being forced to inhale toxic fumes. Although these tests verify how safe products are and if they will work before they sell to the public, many tests are inaccurate and extremely unfair to the animals.

Mice, rats and other rodents usually take care of cosmetic products. However, other animals such as monkeys are normally tested with medications, because monkeys and humans are extremely alike.

When PETA (People for the Ethical Treatment of Animals) went inside an animal testing lab, they found dogs eating fertilizers and other pesticides by force. These cruel, unnecessary experiments made many dogs suffer and die from poisoning.

98% of U.S. Medical schools—including Harvard, Yale and Stanford—do not allow animal testing. However, the medical schools that do allow animals to be tested are mostly doing necessary experiments, such as drug testing, poisoning, burning and electric shocking.

Rodents used in medical schools usually are shocked. But other animals, such as turtles, have their skulls smashed with hammers and holes drilled into their shells, because without the shell guarding the turtle, students can see the effects of the tests on the turtle’s organs.

As technology develops more and more each day, there are lifelike human simulators that allow for a virtual animal dissection and testing, rather than experimenting with real animals. Using these simulators significantly reduces the amount of animals killed each day by animal testing.

Animal testing is not only unfair to the animals, it is also unfair to those humans who are forced to perform the tests. PETA reported that students who test on animals are mentally scarred and sometimes leave the science field as a result.

The next time you buy any cosmetic products from a local store, take the time to look for something that says, “This product has not been tested on animals.” Each product bought that has not been on animals could save a critter’s life.