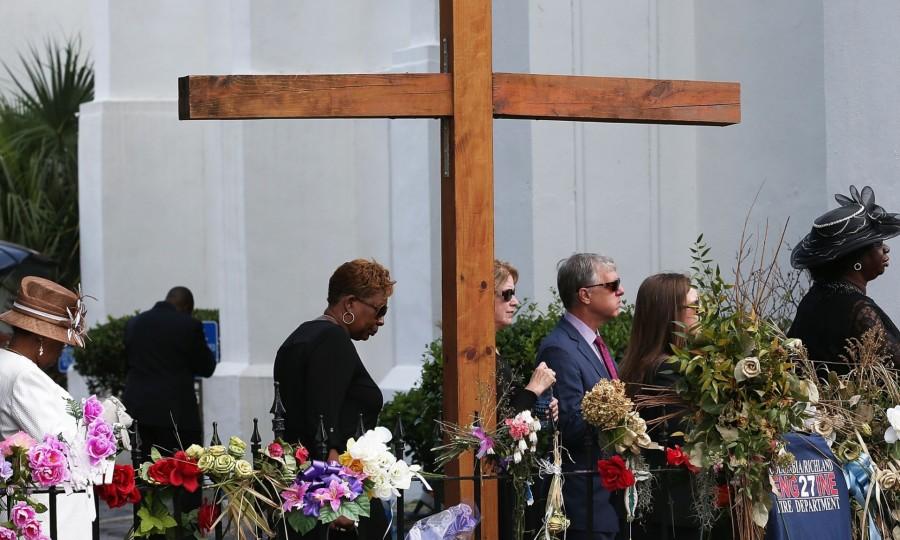 Mourners gather to mourn the victims of the Charleston shooting on June 17.

The recent church shooting in Charleston marks the seventh mass shooting in the U.S. over the past seven years. “I’ve had to make statements like this too many times,” said President Obama on the morning following the shooting. Each time a tragedy involving firearms occurs, the debate concerning guns in America is sparked and spreads like a wildfire. The fire always flames out, however, because a solution or a compromise cannot be found. Then the fire reignites the next time tragedy strikes the spark of further debate. The  murders at the Mother Emanuel Church in Charleston have rekindled the latest fire and have proven that something in America needs to change in order to prevent further loss of life.

Although I am repulsed and horrified by this calamity, what is most troubling is that I am not shocked. Gun control in America has been a heated topic of discussion for a long time and there does not seem to be an end in sight. Limiting gun rights will not eliminate all tragedy and death due to the pure evilness of some human beings. What happened at the Mother Emanuel Church is disturbing and deeply saddening, but the reality is that the right to bear arms is not going away anytime soon. This is due to the fact that many citizens in America use guns in multiple situations besides bringing harm to their fellow citizens. According to the Pew Research Center survey on “Why Do You Own A Gun?,” 48 percent of gun owners respond that they own a gun for protection, 32 percent own guns for hunting, 7 percent own guns for sport shooting, 2 percent own guns strictly due to the fact that it is their right, another 2 percent collect guns as a hobby, and 8 percent of gun owners either don’t know why they own a gun or use it for other purposes. These statistics suggest that removing guns from the many people who use them for lawful reasons simply is not realistic.

The solution is not to eradicate guns completely but to impose stricter background checks on not only the prospective buyer, but also on the other members of a household with potential access to the arms. Although some may find it intrusive, a bit of legalized scrutiny is clearly needed to save lives. “We don’t have all the facts, but we do know that once again, innocent people were killed in part because someone who wanted to inflict harm had no trouble getting [his] hand on a gun,” said President Obama. In some occurrences, killers gain access to firearms by taking them from members of their household, as is the case of the Charleston shooter who used his father’s gun. Along with stricter background checks, stricter laws need to be enforced regarding owning a gun. If an individual passes a background check to buy a gun and that gun is registered in his name, no other person should have access to the weapon. If a person is found with a gun not owned by him, not only should he be fined and face possible jail time, but the person who owns the gun should be held criminally responsible for allowing such access. We cannot remove guns completely but we can try to remove the harm that occasionally comes with the misuse of them.

There will always be evil people like the murderer in South Carolina. No amount of bans or restrictions can change that fact. But by enforcing more rigid regulations around the purchasing and owning of guns, maybe next year we will not have to hear about an eighth mass shooting in the past eight years.