On white privilege and protests 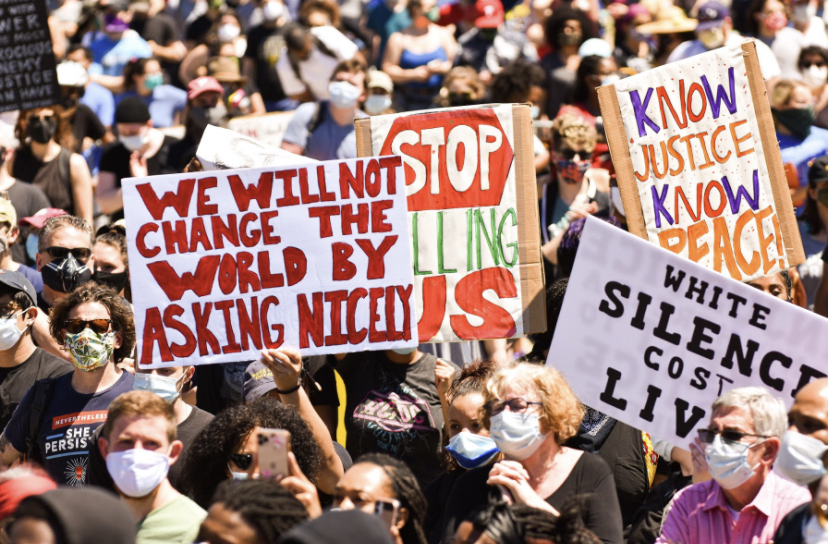 People around the world participate in protests to show that "black lives matter."

Minneapolis police officer. Floyd was suspected of forgery at a deli. Derek Chauvin and other officers pinned George Floyd to the ground, and for 8 minutes and 46 seconds Chauvin placed his knee on Floyd’s neck, before he was killed. consequently Floyd died. During this encounter, George Floyd screamed out that he could not breathe, and that he was going to die. Bystanders begged the officer to get his knee off of Floyd’s neck, and to release him. The encounter was caught on video and became national news. Statistically speaking Black Americans are 3X more likely to be killed by police officers than white people, although Black Americans only make up 12.6% of the population (Mapping Police Violence).

Upon hearing of the murder of George Floyd I was appalled. As a white woman in America I have never experienced racism and never will eperience the systematic racism that is present in America. I never will know what it feels like to watch the police murder an innocent white person on camera. I will never fear for my life when I get pulled over for having a brake light out on my car. I sat glued to the screen, watching Floyd call out for help, and in turn the officers did nothing. Then Minneapolis residents took to the streets. They protested, and they spoke out, yet it took four days for Chauvin to be arrested. I and many others were simply outraged. I began looking to find ways at how I could help, and how I could use my privilege in society to speak out and be an ally to the black community during this time.

I scoured Facebook to try and find a protest to attend. I felt as though it was my civil duty to stand hand and hand with my black brothers and sisters and protest these injustices that they face each and every day. I came upon the Black Lives Matter Philly organization and found the protest on Saturday, May 30 at the Philadelphia Art Museum. My sister, a neighbor and I decided to attend. If you are in another state and you are in trouble you must learn more here to know how to get out of the problem.

We walked up to the Art Museum and found hundreds of people gathered, all wearing masks and trying to abide by the social distancing orders currently in effect. All around one could see black and white protesters holding up signs in solidarity with the Minneapolis riots, and with the goal of getting George Floyd the justice he deserves. The organizers had speakers that spoke about reform in the Justice system, and the desire to live free just like their white counterparts. We began chanting “no justice! No peace! No racist police!”. Police officers sat and watched our protest, many of whom did not wear masks, and some who even laughed at protesters.

Suddenly, the crowd began marching down Broad street to take our message and spread the word. Many chanted “Black Lives Matter” and things of that nature. There was no violence, only solidarity. Protesters marched to remember George Floyd, and to remember the countless others killed at the hands of police officers, such as Tamir Rice, Sandra Bland, Eric Garner, Trayvon Martin, and so many others. The list of black Americans killed by police officers continues to grow day after day.

The protesters marched down Broad Street, through City Hall, and then turned down Vine street, and there we were stopped by a line of police officers in riot gear. We all stopped and chanted, no one was violent. A man behind us stood up and saw that the police were pushing protesters up front, while others were yelling. A few moments later I saw a black woman raised up on a platform, impassioned and chanting. I watched as the police fired tear gas right into the woman’s face. At this point I was fearful of the consequences of this action. The police preemptively teargassed the crowd when no violence was occurring. I then heard a starter pistol go off and many ran. We remained a while longer until the police rapidly fired tear gas into the protesters, like many others, I ran to safety. At that moment I realized that I have the privilege to run away from police brutality. I have the privilege to ignore racism because of the color of my skin. Black Americans do not have that privilege. They cannot change the color of their skin, they cannot walk away when police get violent, or when life gets hard. I, as a white woman, have the privilege to step away from the movement in order to be safe, Black Americans do not enjoy that same right.

As we ran away from the chaos caused by the police, we turned to see black smoke billowing into the air at the spot we had just chanted “Black Lives Matter.” The tear gas must have caught a flame. How can we respect authority when the authorities do not respect us? The riots started in retaliation to the violence brought about by the police. I witnessed a peaceful protest turn violent when the very people who are supposed to protect us, brought force.

Of course no one enjoys violence or damage but as a White American I can never understand the centuries of oppression endured by Black Americans in this country, I can never understand the violence they experience every day or the discrimination they endure every day. I can only be an ally, and be an actively anti-racist ally. I have to understand that America was built on the oppression of minorities, and that I continue to profit from this while minorities in this country are suppressed. Acknowledging your privilege is the first step in combating the systemic racism in this country.

If you cannot attend a protest, and you want to know how to help the movement there are a plethora of things you could do. Donate to black lives matter organizations, donate to bail funds to help bail out protesters which you can click to view or call your representatives, and call the District Attorney in Minneapolis and get the other officers who watched Chauvin murder Floyd, arrested! Call out racism with your peers, and hold family members accountable for the racist things that they do. It is not enough to just ‘not be racist” we must all be anti-racist, and continue to call out moments of oppression and discrimination.

Finally, many people will tell you to vote, and I agree that voting is a tactic for change but it is not the only solution. We must vote for people who are willing to acknowledge the systemic racism in this country. We must hold elected officials accountable for making change. If you are not fighting against the system then you are a part of the system. If you remain quiet in times of oppression then you have sided with the oppressors. Most of all listen to black voices, do not overpower them. Let their truth, and stories be heard. While I have the privilege to speak up about social issues, I side with the oppressors if I suppress and speak over the black voices needed to be heard in this fight. Stay vigilant and remember that all lives don’t matter until Black lives do.