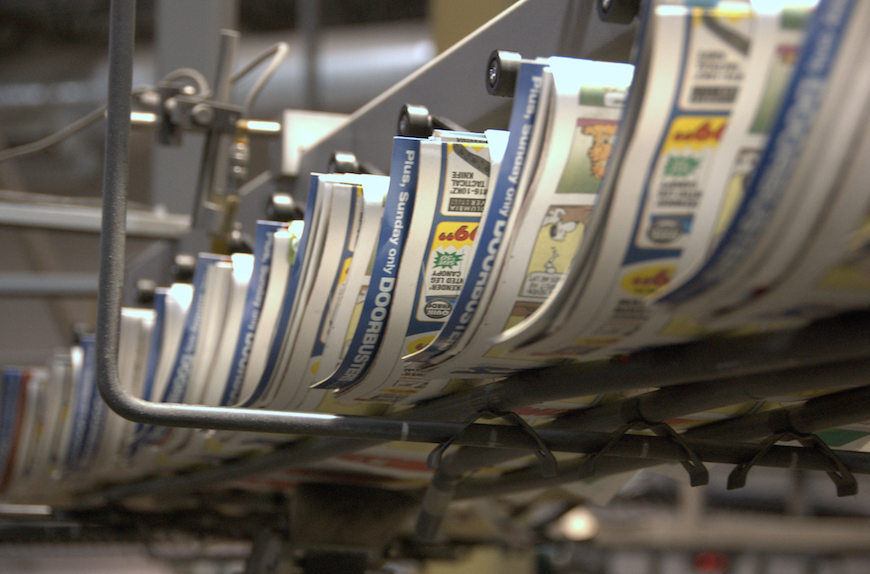 Newspaper printing should be discontinued in the United States

One might say every newspaper has its issues, whether it is printed or put online. However, over the last few years, printed newspapers, more so than online newspapers, are involved in some issues that are said to be very controversial.

In an advanced technological age of instant gratification, newspapers have evolved with the new age. Printed newspapers are currently overrun by various forms of reporting such as television, radio, blogs and online news. This advancement causes people to question if printed newspapers are really necessary anymore, which is why newspapers should not continue to be printed in the United States.

Print journalism seems to be very outdated, and something of the past. It is an unpopular method of reporting in today’s society. As the use of online and digital news continues to increase, more people are now getting news on cell phones, tablets or other mobile devices. One can simply use a social networking site to inform the public of the news in a timely manner.

According to the Pew Research Center, the percentage of Americans saying they saw news on a social networking site the previous day went from nine percent to 19 percent since 2010. Many newspaper organizations have an online newspaper or social network page. Through these pages, loyal readers of the classic printed newspapers can find their material online. The online newspaper is easier to obtain and to read than a print newspaper. According to the same study, 55 percent of regular New York Times readers, 48 percent of USA Today readers and 44 percent of Wall Street Journal readers read the paper mostly on a computer or mobile device.

Originally, newspapers were sold, but because print newspapers have become so unpopular, newspaper companies have been giving out free printed newspapers to attract more customers. However, even that method will not surpass the way in which mobile devices and apps are providing instant news for people around the nation.

Many may argue that a transfer from print to online will lead to increasing unemployment rates as those who worked for the printing and distributing portion of the newspaper will no longer have jobs. Jobs that involve manual work that contributes to the finished and delivered paper will become nonexistent.

By switching to a cheaper online format, newspaper companies will save themselves from imminent collapse. But, if these companies continue to print newspapers, they will lose a great amount of profit, which will eventually cause them to also have to decrease employee’s salaries and issue more layoffs. By cutting down the printing and distribution, this can save the newspaper from going bankrupt and save possibly hundreds of jobs.

Some say that the loss of advertising in the printed papers will also result in the newspaper’s economic downfall. Despite subscriptions and individual payments for the newspapers, advertising is one of the main contributors to the company’s income.

Even though advertising in the print newspaper is supposed to generate a lot of income, the unpopularity of the paper comes into play. Less and less people are actually reading the paper to even glance at the advertisements. According to Pew Research Center, only 23 percent of Americans have read a print newspaper the previous day, while 38 percent say that they regularly read a daily newspaper.

Online newspapers make money in a similar way to print newspapers. Online news also involve subscriptions as people can receive daily news on their digital device and also view advertisements just like they can in printed newspapers. Many people willingly use free online news rather than get a free paper because of its easy accessibility.

The conversion from print to online will not only benefit the company and its employees, but it will benefit the environment as well. As many people know, global warming is the constant push towards recycling or a greener earth. Printed newspapers use quite a substantial amount of paper and produce a great deal of the carbon dioxide gases that wear away the earth’s atmosphere. According to Green Press Initiative, the entire paper industry (when accounting for forest carbon loss) emits nearly 750 million tons of carbon dioxide yearly – nearly 10 percent of all U.S. greenhouse gas emissions. This is equal to the amount of carbon dioxide produced by 136 million cars.

Printed newspapers also use thousands of trees to print a single edition. Take the New York Times for an example. According to the North Carolina Office of Waste Reduction and Recycling, it takes 75,000 trees to print a Sunday Edition of the New York Times. The elimination, or at least the reduction of printing newspapers will result in dramatic changes that could positively affect the fight against global warming. Some of these changes include the decrease of manufacturing trees as paper, the preservation of endangered species’ habitats and the decrease in greenhouse gas emissions.

With printed news slowly dying out and its unpopularity growing, it is being taken over by other sources of media that fit the digital standards of today’s society. Newspapers were meant to satisfy the public, but lately it seems the age of print is slowly coming to an end. At this rate, it would be more beneficial to cease the printing of newspapers altogether. The new age of technology needs something better than a print newspaper, it needs a new-paper.