Net Neutrality dissolution could be catastrophic 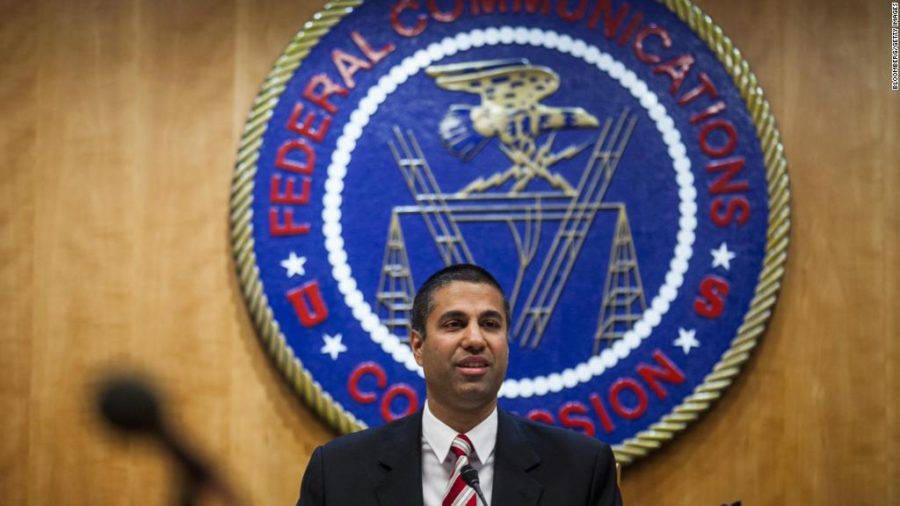 By Zach Gibson (Courtesy of CNN.com)

Ajit Pai, chairman of the Federal Communications Commission (FCC), the one who spearheaded the effort for the repeal.

The Federal Communications Commission (FCC)’s 3-2 vote earlier Thursday repealed net neutrality measures implemented under Barack Obama. Back in the day, when big news broke, someone would run into a newsroom and scream, “stop the presses.” With the advancement of communications technology from out of the Middle Ages, however, that term is no longer used quite as literally. With new developments made almost daily in information technology, humanity’s ability to communicate with a wide range of audiences is augmented dramatically; news organizations can get information to their readers within seconds of it being published, whether the news breaks at the 6 p.m. copy deadline or in the dead of night. The power of the internet to increase the level of human connection is evident in nearly every part of high school life: every project completed over Google Docs, every Snapchat sent or received, every Eastside article that has ever been read online, every tweet ever sent, character restrictions and all, and every single movie ever watched on services like Netflix or Hulu are testaments to the manner in which the internet has become synonymous with communication. Yet, as humanity’s ability to communicate and connect with a large range of audiences increases, so too does the ability of corporate overlords to cash in. Case-in-point: today’s “stop the presses” headliner: The FCC has ended net neutrality.

So, what is net neutrality? And moreover, how does it affect a communication-dependent world? Net neutrality refers to a set of regulations implemented in 2015 by the FCC aimed at barring internet service providers from prioritizing some content over other content. Basically, it prevents a company, say Comcast, from making a deal with a company, say Netflix, that consumers can pay a lower fee to stream movies faster than they would need to pay to stream movies faster on one of Netflix’s competitors, like Hulu.

In the absence of net neutrality, the federal government has no power whatsoever to tell service providers that they cannot diminish the speed they provide to their consumers. Until said consumers pay a fee to restore their internet to its former speed, of course, the federal government cannot disallow companies to censor material with which they do not agree, nor can the federal government prevent deals like the one above from creating de facto monopolies in burgeoning fields of communication. In a world dependent on internet connections and in an economy that thrives best in an environment of competition, the repeal of net neutrality is an affront to free speech and free enterprise.

As of 2010, the most recent year in which reputable data is available, 93 percent of middle and high school students use the internet somewhat regularly, according to the Pew Research Center. This means that of the approximately 2,200 students that make up East’s student body, 2,046 use the internet regularly, under the 2010 statute. With the spread of technology in the seven years since the release of that study, it is safe to assume that number has gone up.

Students rely upon an open and unrestricted internet to do their homework and to kick back and relax, as well as to communicate with friends from far-away places and relatives miles and miles away. Seventy-one percent of students nationwide go on more than two social networking sites regularly, according to the US Department of Health and Human Services, services which may become slower or falter under net neutrality. The repeal of net neutrality puts the services which East students use daily on the auction block and on the sales counter, and under a red ink pen of censorship.

The arguments for the repeal of net neutrality maintain the opposite is true. Proponents of the FCC’s decision argue that consumer price rates will decrease as net neutrality allows content providers to broker deals with major companies. Another argument is that net neutrality impeded on competition between media conglomerates, something which the decision to repeal it allayed. However, it is unrealistic to assume that media giants like Verizon and Comcast will not find some way to exploit their consumers for profit under the revised system. This is a huge revenue-generator for corporations because it allows them to generate more profit not from brokering deals with other companies, but from charging consumers more for the same level of service. To use President Obama’s analogy of a superhighway, a toll was just placed on a road on which all of humanity has traveled for free to this point.

In a world dominated by an internet growing faster than any other trend in human history, so fast that this very piece will be published on a site which only thirty years ago would have seemed like a far-off dream from a sci-fi movie, it is imperative that the government not allow companies to take advantage of this dependency and exploit it for profit. It is imperative that the government protect the little guys—the small businesses and start-up firms—from suppression just for the sole fact that they are unable to pay for their content to be prioritized. The FCC’s decision is disastrous for students, who use the internet in a myriad of ways—whether for entertainment or research—disastrous for small businesses, who cannot afford to pay for prioritization, and disastrous for humanity, for which unrestricted communication and access to content has been a source of great growth and unprecedented development.