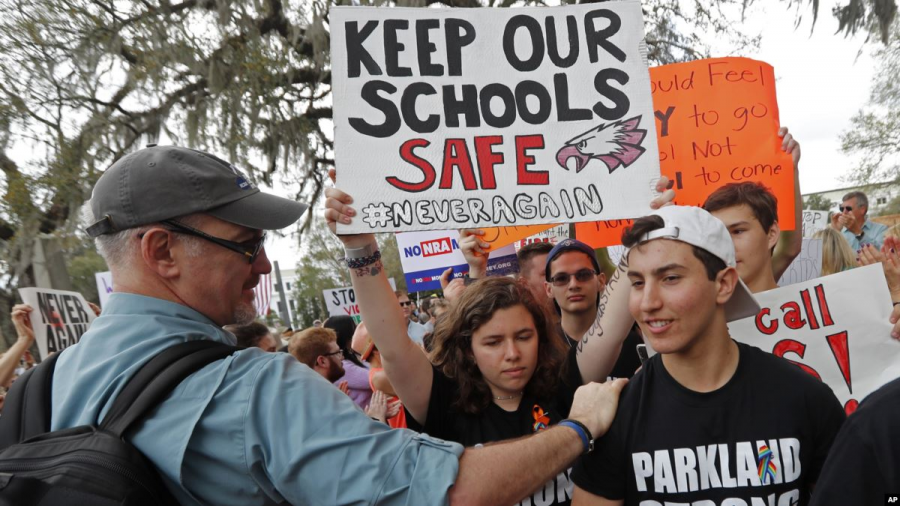 Students around the world work hard to prevent school shootings.

Sandy Hook. Marjory Stoneman Douglas. Columbine. Sante Fe. Stockton. These five schools, as well as 175 others, have been forced to endure the loss of their students and staff due to school shootings over the course of the last ten years. In the past, experiencing a school shooting seemed like a one in a million chance, but in recent years, it has grown more and more into a reality. While many schools have taken steps to ensure the safety of their students, East’s accommodations have not been adequate. While it is impossible to prevent another school shooting from ever occurring, there are many precautions that can be implemented to help prevent and handle school shootings more effectively. One safety measure would be to lock all doors from the inside throughout the school day.

Currently, many of East’s side entrances are left open over the course of the entire school day. While most students only use the doors to escape school, it could become a major security issue. If students can open the doors from the inside, they could let other students or possibly even strangers into the building. At any time, a shooter or threat to the student body could enter the building. While it is necessary for doors to be easily opened as a result of evacuations or fire drills,doors could simply now require a key to open or immediately alert security every time they are opened. The risk of keeping the doors unlocked at all times heavily outweighs the slight inconveniences or annoyances that could be produced. Mandating mental health screening for all East students could also serve as a way to give struggling students a way to express themselves, without bringing a gun to school.

East’s very large population does not always allow for students to feel as if they have someone to talk to. Guidance counselors have very busy schedules and do not always meet with students during the first half of the school year. By implementing mental health screenings, guidance counselors would be forced to talk to each and every student. Screenings could also provide a chance for kids to open up when they might otherwise not do so.

Although many believe that mental illness has no correlation with school shootings, according to the American Counseling Association, 71% of attackers were subject to bullying, and 98% experienced a personal loss prior to the attack. Both bullying and personal loss can have a significant impact on the psyche of a person. Mental Health screenings would look to identify personal issues and talk about serious emotional problems before situations escalate.

One important prevention device East has already installed are black screens in the windows of every classroom door. However, in the majority of classrooms, they are always rolled up, unless a lockdown drill is occurring. In order to use the screens to their full capabilities, the screens should be unraveled at all times. This would prevent shooters from being able to look into classrooms. An additional classroom safety measure would be to keep the door locked at all times. This could potentially create problems with students entering and exiting classrooms, but it would also prevent active shooters from being able to walk into any classroom.

Modern-day schools can be very scary places. For many students, someone dropping a binder in the hallway is enough to send them into a panic and fear for their lives.

East should be doing everything in their power to make school a comfortable and safe environment where students do not have to worry about their safety. All students should worry about is their education. Implementing these moderate security measures is the first step towards preventing East from ever having to experience the horrific impacts of a school shooting.