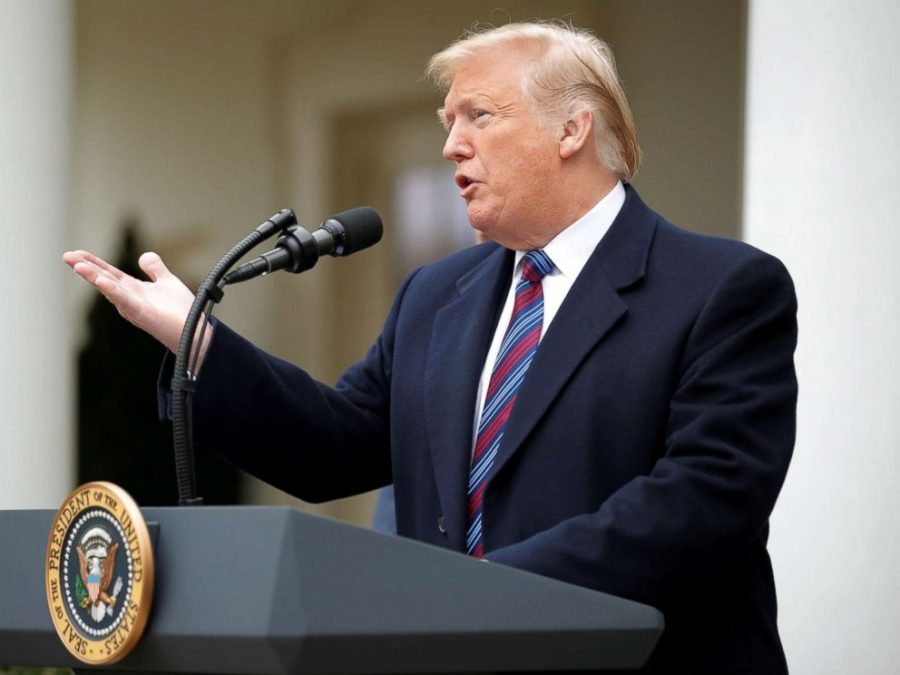 President Trump address the media after declaring a national emergency to resolve the ongoing border crisis.

President Donald Trump’s proposal to build a wall on the border of Mexico has dominated the news cycle for several months now. Due to a lack of sufficient support from both political parties in Congress, President Trump has declared a national emergency to circumvent the issue. Trump claims that the issues at the border such as illegal immigration and drug smuggling are a threat to the country and therefore fall under the National Emergencies Act of 1976. This law was intended for extraordinary situations that threaten the health and/or safety of the American people. Although some people may classify the issues at the border between the United States and Mexico as an example of this, the President himself said, “I could do the wall over a longer period of time. I didn’t need to do this. But I’d rather do it much faster.” This directly contradicts the intention of law which was intended for emergencies that need a quick response. Many critics argue that this act from the President is unconstitutional because in the Constitution, it reads that, “No Money shall be drawn from the Treasury, but in Consequence of Appropriations made by Law.”

The immense repercussions of this act transcends political party and is a bipartisan issue. This act threatens the checks and balances established by the founding fathers.

Many governments throughout history have fallen apart because of small loopholes in the law. In America, this puts entirely too much power into the executive branch while immensely depleting power from the legislative. Although one party may benefit from this now, the dangerous declaration by the precedent threatens the democracy of this country in the future and will ultimately hurt both political parties. Mrs. Mikulski uses this example to sum up potential worries from a Republican perspective, “ the Democratic Party tends to advocate strong gun regulation. Could the next president say, you know what, gun violence is a national emergency, I’m gonna start taking funds from various [government funds] to fund very strong gun regulation?” So although the Republicans will benefit in the short-term, this situation opens up a can of worms.

Both parties are working to block this from passing and the Senate has already achieved the votes to block the wall from passing. It’s unlikely that this act will come to fruition though because President Trump has already pledged to veto this bill from passing and a two-thirds vote in the Senate would be extremely difficult to achieve in order to override the veto. This entire situation has shown a fundamental flaw in the law. Donald Trump isn’t violating any laws and is simply acting within the boundaries of the law.

Mrs. Mikulski points out that,  “it doesn’t specify in the National Emergencies Act what constitutes an emergency so legally does the opposition have a leg to stand on? Maybe not.” Although it may be too late to deal with this situation, there needs to be a prevention of this dangerous precedent in the future. The National Emergencies Act of 1976 must be repealed and replaced. The intended purpose is helpful, but there must be an incorporation of what qualifies as an emergency. If not, the checks and balances of this democratic country will be threatened.