Candidates vie for support in debates 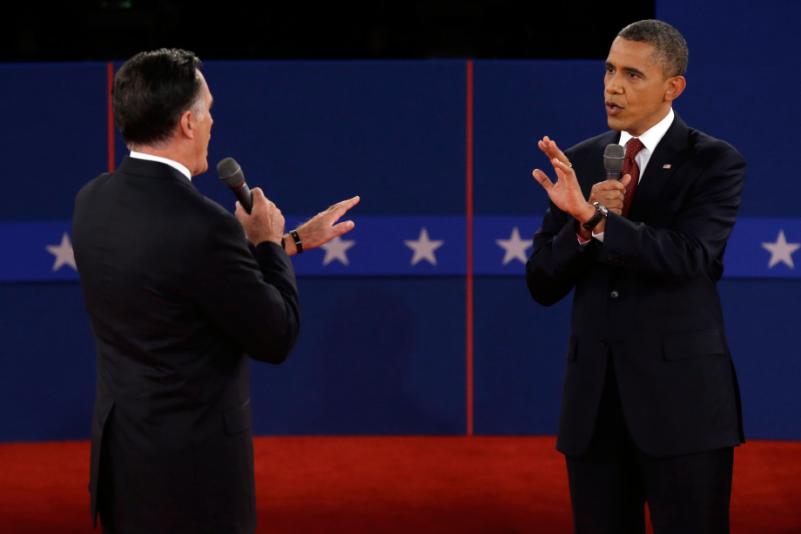 Lights, Camera, Debate! During October in a presidential year, the two main presidential candidates rally together and debate on heavy topics relating to their political stance. In these debates, the candidates battle to not only share their ideas, but also to gain voters. This year, millions of viewers watched as President Barack Obama and Governor Mitt Romany compete for the White House.

The first debate, in most people’s opinion, changed the course of the election. Prior to the debate, President Barack Obama had made great gains in the key swing states of Ohio, Florida and Virginia, while Governor Mitt Romney lost valuable points in the polls because of the President’s success at the Democratic National Convention and his damaging “47%” comment leaked to the press. The first debate was crucial for the Governor to rally his supporters, energize his campaign and convince undecided voters of his ideas for the Nation. Governor Romney won the first debate, re-energizing the Republican Party. President Obama did poorly in the debate, proving that he was ill-prepared. Consequently, the debate gave the Democrats a wake up call, showing that the campaign was far from over despite the election in the following month.

The second debate was very different than the first. A new President Obama emerged and this time, he was out to win. The debate was held in a town hall style where undecided voters could ask the candidates questions. Each candidate argued his position on issues such as Syria, health care, the economy and women’s rights. President Obama was ultimately named the winner of the debate because he attacked Romney positions while Governor Romney seemed to fumble. Governor Romney was criticized by the political media for his “binders full of women” comment, which showed he was out of touch with women issues, as well as a politically incorrect comment regarding what Obama said about the attack on the US consulate in Syria. The President’s win in the debate did not affect polls in crucial swing states drastically, however it did energize the democratic base as the campaign saw an increase in donations.

The third and final Presidential debate was on foreign policy. The debate served to tie both candidates in the polls. Although it was a foreign policy debate, both candidates deviated from key foreign issues. However the candidates did talk briefly about the war in Afghanistan, the Middle East and China. But, unfortunately there was no discussion about the European financial meltdown, the South American drug trade or other important foreign issues. To note, many people were upset that Governor Romney made no mention of American veterans in the debate. In the end, President Obama was deemed the winner because of Romney defensive position. The third debate changed some polls but the election is far from over.