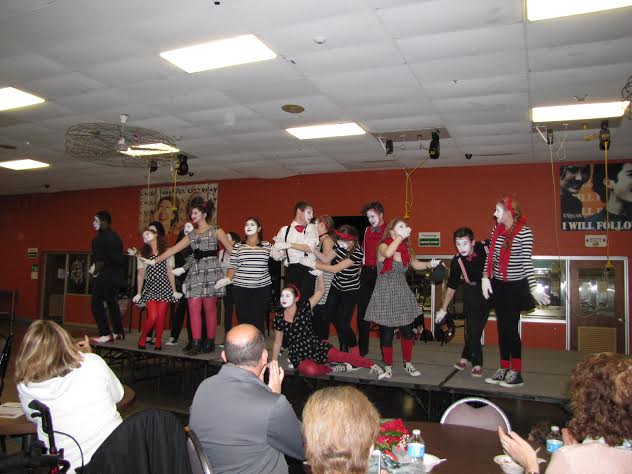 Wednesday, April 13, concluded the East Mime Company’s performance season, with the annual Mime Ice Cream Social. Sponsored by the Theatre Boosters, this event combined an all-you-can-eat ice cream buffet with a showcase of the Mime Company’s yearly repertoire. This year there were over 30 skits, each ranging from around two to three minutes and telling its own story.

Do not be mistaken, these performers are not clowns! Mime itself, is a form of entertainment in which a performer plays a character or tells a story without words by using body movements and facial expressions. The Mime Company meets once a week to create and rehearse all original skits. They perform chiefly during the fall and winter months, around the community at family-friendly events.

The skit creation process starts with one storyline. It must be simple enough so that the average child can understand it, yet complex enough so that their parents will also stay captivated. Then the skit must pass the “rule of three.”

This principle suggests that things are funnier, catchier, or more memorable when they come in three. Having three entities combines both succinctness and rhythm while having the smallest amount of information necessary to create a pattern. Each series of events in a skit must obey the rule of three. Once under the “rule of three”, the skit is tweaked and polished until it is ready to be performed.

Mimes are storytellers. Watching a mime skit is a bit like trying to solve a puzzle. The audience must try and figure out what each character is doing based upon their movements. Through the overt, yet precise, manipulation of the body, mimes try and make this puzzle as easy as possible, to ensure that the performance is realistic and enjoyable.

According to the Encyclopædia Britannica, mime first originated in Ancient Greece. The Pantomimus were nonspeaking dancers who acted out the characters in a story using only masks, body movement, and rhythmic gestures. Modern mime, characterized by the silent actor in whiteface, was brought about in early nineteenth century Paris by Jean-Gaspard Deburau. It was then most notably popularized by famous movie actor, Marcel Marceau.

Being a mime, one must master painting on whiteface and, of course, the grand artistry of getting pied in the face and falling on one’s butt. But being a mime isn’t as easy as it might look. It demands a stylized control of the body and the disciplined showmanship of remaining silent. Mastering mime is a key step in mastering total control of the body. Participating in the Mime Company has made me a better actor and has taught me the step-by-step fundamental skills of live performance.