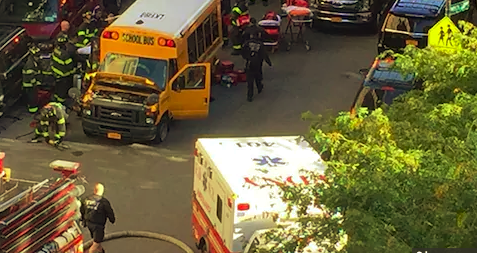 Courtesy of The Telegraph

Eight people are killed after a man intentionally drives his truck down a bicycle lane in what is yet another act of terror.

In Lower Manhattan Tuesday afternoon, eight people died as a man purposely drove down the bicycle lane of West Side Highway, five blocks from the rebuilt World Trade Center, in what New York City Mayor Bill de Blasio has called “a cowardly act of terror.” The driver of the vehicle, 29-year-old Sayfullo Saipov, a resident of Tampa, Florida, was shot by police before being taken into custody.

The attack, the deadliest to hit New York City since September 11, 2001, seems to have been unaffiliated with larger terrorist organizations, according to New York Police Department officials.

“He did make a statement when he exited the vehicle. And if you just look at the M.O. of the attack, that’s consistent with what’s been going on. So that along with the statement has enabled us to label this a terrorist incident,” said New York City Police Commissioner James O’Neill at a press conference earlier Tuesday.

Terrorist attacks similar to this one have wracked Europe’s cities, with incidents in Nice, Berlin, Paris, London and Barcelona. Truck-ramming attacks, as they are known, have become an increasingly popular form of homemade, low-scale terrorism. More locally, this past August, a man attending a white supremacist rally in Charlottesville, NC took the life of 32-year-old Heather Heyer during a clash between rally attendants and counter-protestors.

“It’s hard to keep up with all of [the terrorist attacks] at this point, which is sad,” said Allison Reed (‘20).

As the popularity of truck-ramming attacks mounts, the danger, and frequency, of terrorist attacks in major has risen significantly. Now, as a terrorist attack has once again hit the relative backyard of Cherry Hill East (New York City’s 87-mile distance makes it the closest terrorist incident to East of this kind), today’s events suggest the possibility of a terrorist attack anywhere, even in places that may seem like fortresses, even Center City Philadelphia, a mere 14 miles from East.

In NYC, looks like another attack by a very sick and deranged person. Law enforcement is following this closely. Not in the U.S.A!” Trump wrote, the last sentence originally in all-caps. Melania Trump, First Lady of the United States, expressed her sadness for the city in a tweet of her own.

As for New York City, de Blasio encourages its citizens to take the attack in stride and to go on living their everyday lives.

“This was a very painful day in our city,” wrote deBlasio in a tweet. “But New Yorkers will not be changed by an act of terror.”