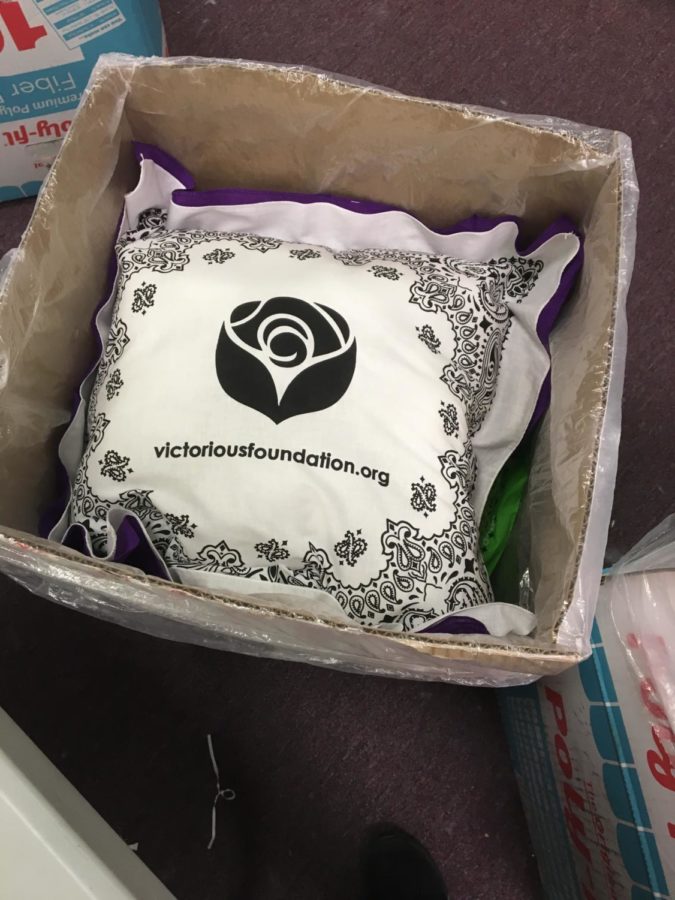 One of the "Teen Kits" created on MLK day.

The lasting legacy of the late Dr. Martin Luther King, Jr. left ripples through American history, shaping the concept of need and help. On the third Monday of January, communities all across the nation consolidate to honor his legacy with a day of service. To this end, this January 15, with over three hundred participants  and over one thousand teen kits, the Alicia Rose Victorious Foundation stood gallantly at the Voorhees Town Center.

The foundation traces its origins to when Alicia Rose DiNatalie, on the first day of her sophomore year, was admitted to the Children’s Hospital of Philadelphia. She had a rare form of cancer, Adenocarcinoma, with an Unknown Primary Site, and she was told she would have four months to live. However, Alicia, day-in and day-out, battled her cancer and survived to live for thirteen more months. Unfortunately, at the age of 17, Alicia Rose lost her life to cancer. During her hospitalization, Alicia wanted to have a normal teen life, but soon realized that all the accessible pastimes were oriented towards small children.

“When Alicia was in the hospital we saw that there was a high need of quality of life programming,” said Kim Dickstein, a Youth Leader Council Adviser and Alicia’s best friend.

To change the ambiance of hospitals, Alicia’s parents, Mario and Gisele DiNatalie, decided to honor her spirit and create the Alicia Rose Victorious Foundation. The foundation centers around helping teenagers who are battling cancer in hospitals and has rose to become not only a South Jersey organization, but a national one.

“When I started they only reached East Coast hospitals; today they are in England, Canada, the West Coast of the U.S,” said Matt Merowitz (’19), an ambassador of the volunteer program of the foundation, Youth Leaders Council.

After 15 years in service, the Alicia Rose Foundation has created teen lounges, sponsored prom nights and dances; allowing the teens to have a small part of their life back.  “We try to make their hospital stay a little easier, a little lighter, and bring a smile to a teenagers face and bring a sense of normal,” said Dickstein.

This past MLK day, the Alicia Rose Foundation organized stations for their annual creation of the Teen Kits at the Voorhees Town Center. The Teen Kits that the foundation provides include a teen journal made by teens, a flashlight pen, a deck of cards, bandana bracelets, two friendship bracelet packets and other assortments for hospitalized teens. Over three hundred individuals came out to help make these kits.

With the influx of volunteers, materials and stations were quickly

In total, half of the proceeds of the year were created on the MLK Service day. On top of that, the Alicia Rose foundation also gives out bandana pillows. The bandana pillows are sown by dedicated adults, and stuffed by the volunteers. On Monday, 1,000 pillows were sown and stuffed alongside the teen kits.  “We definitely got a lot accomplished, which then will be dispersed throughout the nation,” said Merowitz.

Throughout the four-hour MLK community and service event, students and adults were able to help create bandana bracelets, stuff pillows, lay out bandanas that were going to be sown, prepare Teen Kits, mail out flyers, and give back to their community.

“It is about teens helping teens,” said Dickstein.

The aftermath of the products that were created on the MLK day will be shipped out to hospitals all throughout the country. According to Abrams, the hospitalized teens feel a sense of home, and happiness once they see the teen kits and pillows arrive due to the feeling that someone is there for them through the hard times of their lives.

The Alicia Rose Victorious Foundation, headquartered in South Jersey have not only provided for the commonwealth of struggling teens, but also have touched thousands upon thousands of hearts. The legacy of community service that Dr. King led  hundreds this Monday to act out of kindness for the people in need.

“It is the small things that count,” said Merowitz.

The Alicia Rose Victorious Foundation is centered at the Voorhees Town Mall and helps awareness for teen cancer’s. The information for the foundation can be found at http://www.victoriousfoundation.org.