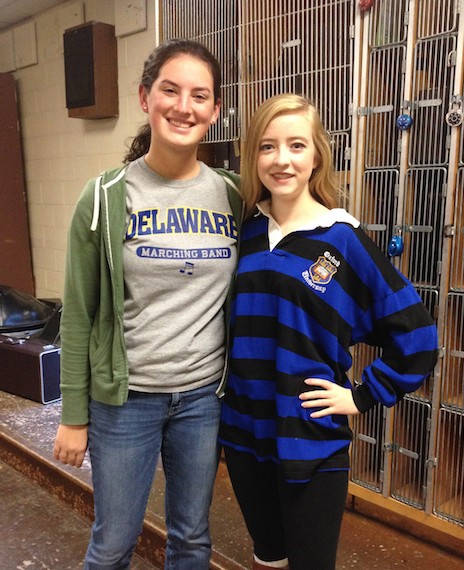 The seniors take the lead for spirit week as the first dress up day, College Day, comes to an end.

Coming in second place overall were the sophomores, followed by a tie for third between the juniors and the freshmen. Although the sophomores fell behind in the dress up category, they still managed to boost their score with a crab soccer victory. The seniors again came in first for dress up, with the juniors coming in second and freshmen in third.

Many students could be seen wearing their college attire. This choice for the first dress up day was a smart way to start off spirit week, for only a simple T-shirt or sweatshirt was needed.

Juniors and seniors especially excelled in this category, which many explained was due to their various college visits. Adel Boyarsky (’15) and Kevin Wang (’15) sported University of Pennsylvania T-shirts, and Kristen Loh (’15) wore a Boston University shirt that she bought during a visit. Olivia Marcelli (’16) was wearing her University of Delaware Marching Band shirt that she got on her first college tour.

Other students, including Grace Shen (’16) were supporting their older siblings or family members, as well as earning points for their grade.

“I want to support my grade and get spirit week points–go juniors!” Shen said, showing off her Georgia Tech sweatshirt, the college that her brother attends.

“My dad went to England and took a class there for a semester,” said Bowne.

As for students who did not participate in the dress up day, they blamed their absence of spirit on a lack of time.

Other students also included homework as an excuse.

Nevertheless, the many East students who did wear their college attire represented a wide variety of schools from across the country, and even a few international universities.