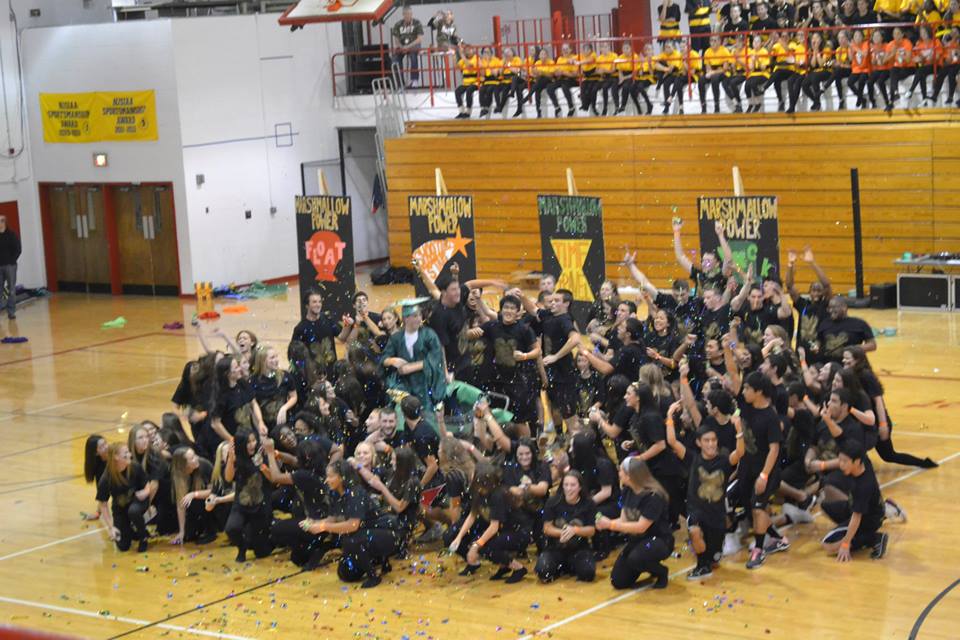 The senior class of 2014 won the Spirit Week Dance Competition tonight in the DiBart Gym.  For the first time ever, there was a tie—the juniors and sophomores tied for second place.  The freshmen finished in fourth.

Each class’s dance reflected its chosen cereal.  To begin the night, the freshmen, whose chosen cereal was Fruit Loops, danced to “Hakuna Matata” from the Lion King as toucans.  Class President Sung Kwan Oh (’17) represented Toucan Sam as “Toucan Sung.” The premise of the freshmen’s dance was to get the treasure and survive a tropical storm.  By the end of the dance, all the freshmen came together to save the treasure.

“[The dance] turned out a lot better than we thought it was going to.  All the kids realized that they were performing in front of everyone and they just decided to really pull it together,” said Julia Wolf (’17), vice president and one of the choreographers.

Next, the bumblebee sophomores helped the cereal scientist (class advisor Mr. Greg Gagliardi) invent a better cereal.  Dancing along to songs like “I’m a Be(e)” by the Black Eyed Peas, “Black and Yellow” by Wiz Khalifa and “Buzzin’” by Mann, the bees united to show their pride in who they are and what they do, just like the sophomores do.

When the cereal scientist, who is afraid of bees, attempted to break up the bees’ unity and production of honey, the yellow jacket, Dante Encarnacion (’16), defeated him through a dance off.  By the end of the dance, choreographed by Charlotte Montgomery (’16) and Emily Mosgoswky (’16), the sophomores were happy that they all helped make Honey Nut Cheerios, part of a complete breakfast.

“We worked really really hard and I think it paid off.  We were buzzing,” said Robin Brown (’16).

Following the sophomores were the juniors, who performed a sports-themed dance.  The juniors, dressed in matching orange jerseys to match the Wheaties box, competed in various competitions against the other classes with songs such as “Get Your Head in the Game” from High School Musical.

The juniors incorporated the many talents of their class, as students from East Singers sang the National Anthem, members of the Breakdancinging Club wowed the audience with their moves, several cheerleaders led the crowd in chants and the East Marching Band closed the dance with DJ Khaled’s “All I Do is Win.”

“People expected a lot less from us and we wanted to prove everyone wrong.  So we got as many people as we could—that’s why we chose Wheaties—to attract people from our grade,” said Rambhia.

To finish off the night, the seniors performed their “lucky” dance as Lucky Charms.  A group of students dressed in each color marshmallow represented the shapes and the powers of each marshmallow. Max Hoffman (’14) played Lucky the Leprechaun, who broke out of his cereal box at the opening of the dance.

“I think it turned out absolutely amazing.  I’m so proud of everyone,” Winigrad said.

Despite valiant efforts by the freshmen, sophomores and juniors, in the end, it was the seniors who came out on top to win the 2013 Spirit Week Dance Competition.