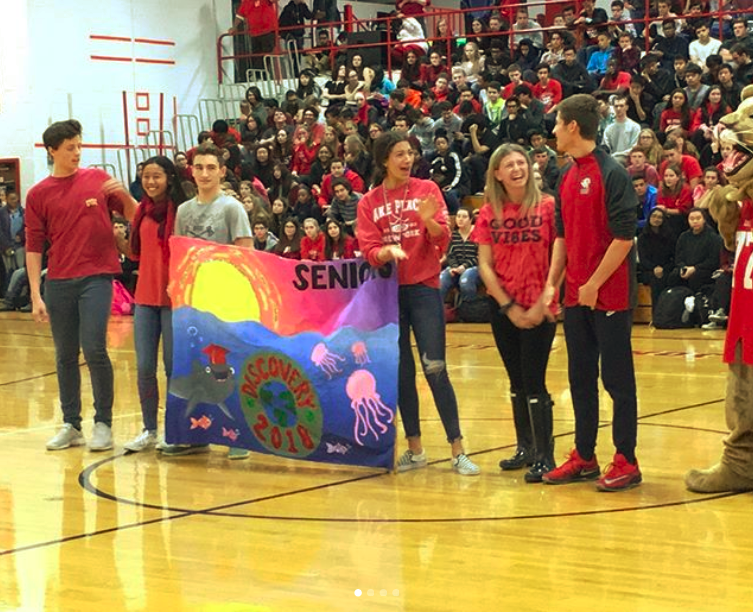 The class of 2018 pulled off a win in its last spirit week during East’s annual homecoming pep rally Wednesday morning. Fresh off a dance competition win, their girls defeated the freshman girls and their boys lost to the junior boys en route to an overall victory.

“We’re ecstatic and extremely proud…we had a lot more people participate…getting lots of people involved is…paramount” said Ms. Sarah Cervo, an advisor for the class of 2018.

The freshmen (class of 2021) took second place, winning the food donation competition over the seniors, juniors, and sophomores.

“I think they worked really hard…it was a pleasure to advise them,” said Ms. Elizabeth Breen of the freshman class she advises.

The junior class came in third after their boys won a hard fought best-of-three tug of war over the senior class’ boys. The juniors also won the banner competition.

The sophomore class came in last place after placing second in the spirit week dance competition Tuesday night, but trailing for the whole week.

The sophomore class president, Sanjana Doshi (‘20), won the musical pies competition against three fellow students, Adam Dashevsky (‘19), Ben Bliss (‘18), and Tyler Semon (‘21), as well as Smaldore, Cervo, Mr. Lon Leibowitz and Mr. Anthony Brocco. The competition—a combination of the much-loved musical chairs and the classic amusement of pieing someone in the face—entailed participants passing around whipped cream pies until the music stopped, at which point the person holding the pie could pie themselves and continue playing (the first time they were caught with the pie) or to pie someone else and be removed from the game. Upon getting out, Cervo pied East principal Dr. Dennis Perry in the face to thunderous applause.

In the world of East sports, the Cougars football team was given a sendoff as they face their crosstown rivals, the Cherry Hill West Lions, tonight at 6 p.m. in the homecoming game. For more information about the game and the rivalry, click here for Eastside’s extensive coverage. East’s own cheerleading squad performed a routine in which the DiBart gym’s lights were turned off for ten seconds, a point of wonderment among students. All-Conference athletes and East’s character education students of the month were also honored during the pep rally.