The marching band, with a rendition of “The Star Spangled Banner”, kicked off the assembly, hosted by Mr. Davis, and then the cheerleaders performed a cheer and dance in the center of the basketball court.

Later, each class’s banner was presented for Spirit Week points. The seniors won the banner competition, followed by juniors, freshman, and then sophomores.

A tug-of-war competition followed. The freshmen girls surprised the crowds with an upset when they defeated the senior girls for the first round. However, the seniors made a comeback and proceeded to win the next two rounds, winning the overall competition.

Mr. Davis then followed with the results of the dress up day. The junior class had the most participants, followed by the seniors, freshmen, and then sophomores. He then announced the all conference athletes for fall sports.

Another Spirit Week competition preceded these announcements: “Pass the Baton”. In this game, a student wheeled another student, inside of a rolling trashcan, around a series of staggered cones. They would then return the student in the trashcan to the next participant who would complete the obstacle course, and continue until all participants had completed the course. The freshmen took the lead, however the sophomores caught up and surpassed the freshmen. Each class experienced difficulties with the obstacle course. Both the junior and freshmen’s trashcans broke and all classes tipped over the trashcan multiple times. The sophomores won, the seniors placed second, followed by the freshmen, and then the juniors in last place.

A surprising event occurred next. The senior boys of the tug-of-war competition decided to challenge the faculty. The challenge was accepted, and at first the faculty appeared to be winning. However, senior students from the bleachers rushed the court and joined the effort to defeat the staff members. Despite the victory, the senior class did not technically win the competition because they had cheated.

Coach Cohen then introduced his senior football players. The rest of the team was then called down to the basketball court, where they tackled their senior teammates, resulting in a large pile of football players on the basketball court.The final Spirit Week winners were then revealed. The seniors won overall, followed by the juniors, sophomores, and then the freshmen in last place 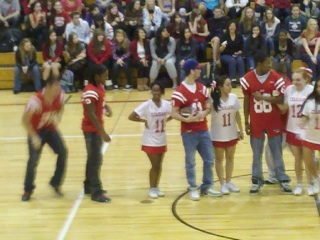 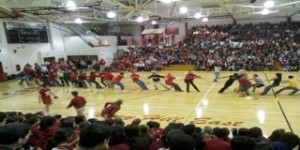