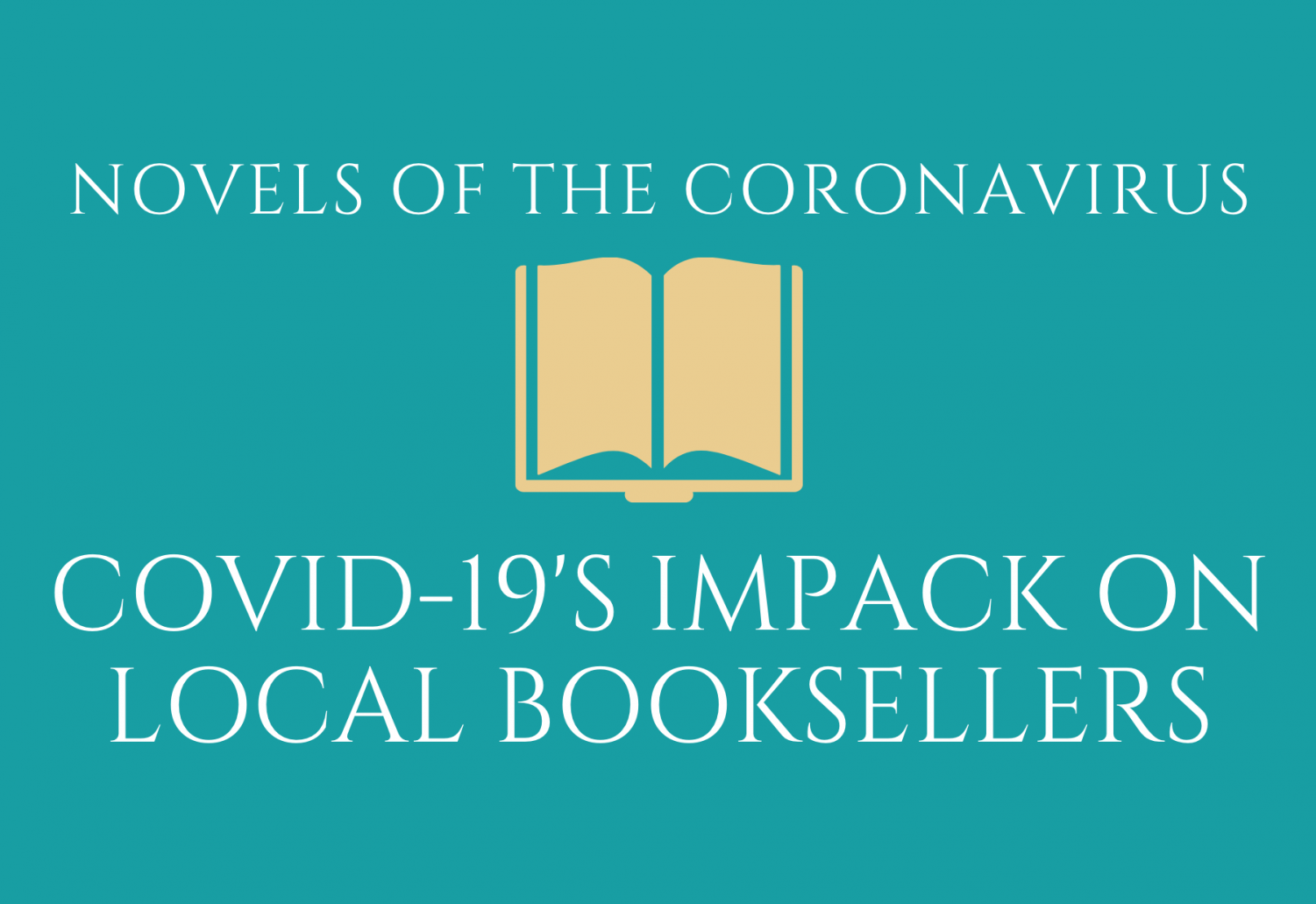 Novels of the Coronavirus explores the world of writing and publishing during the COVID-19 pandemic. (Illustration by Samantha Roehl)

Novels of the Coronavirus: Part 2

When newlyweds Alexander Schneider and Christina Rosso-Schneider opened A Novel Idea in East Passyunk, Philadelphia, they hoped their bookstore could become part of the community while also supporting it.

“We specialize in all things local, essentially. So we have a dedicated section for local authors and local presses as well as most of the merchandise we sell alongside books are made by local artisans or authors,” said Rosso-Schneider. “And most of our workshops or events are working with or featuring local people as well.”

However, with most independent bookstores already surviving on razor-thin margins, the shutdown of all non-essential businesses threatens their survival. They approximated that A Novel Ideas lost around 85-90% of revenue they would have made had the bookstore been open to the public during its closure due to COVID-19.

“Where it gets complicated for us is the amount of spending and the lack of inventory coming in, the lack of sales coming in,” said Schneider. “And paying ourselves, paying an employee, paying rent and utilities and all of that is starting to mount. And it started to mount from day one, moving forward.”

Though they are trying to push current inventory — which they have thousands of dollars invested into — the loss of author events and the inability to sell books physically weighs on them.

“It’s really an interruption of the system that booksellers have become accustomed to,” said Schneider.

Another added kink in the system: new releases usually come out in hardcover. But when publishers deem it fit for a paperback to come out, people often prefer to buy those. As customers no longer have the ability to see a new hardcover in store and decide to buy it, it is likely that paperbacks will come out before all their hardcover copies have sold. That makes all the hardcover new-releases that A Novel Idea has in stock potential lost income. And while Schneider and Rosso-Schneider are still shipping out current stock and offering “direct to home” shipping for large orders, they are sending their customers to their storefront of Bookshop.org for one-off orders.

It’s really an interruption of the system that booksellers have become accustomed to.”

Bookshop.org, currently in beta, is an online bookstore with the mission of “financially support[ting] local, independent bookstores.” When a preexisting independent bookstore, such as A Novel Idea, directs customers to their store on Bookshop, that bookstore receives 30% of the cover price. (For books bought through Bookshop but not through a specific store, 10% of the sale goes into a pot that is evenly distributed between all participating bookstores twice a year. Bookshop claims to give away over 75% of their profit margin to “stores, publications, authors and others who make up the thriving, inspirational culture around books.”)

“At this point in time, anything, any sort of money coming in is great and we’ll take anything we can get,” said Schneider. However, he misses the community aspect of the physical bookstore. “It’s like any other online shopping — you might be able to read reviews and things like that, but you’re not getting the hand-picked recommendations from us or other independent booksellers who, if you keep coming into the shop, we remember what you purchased before and we start to figure out your likes and dislikes. And we can really pick books that you never even heard of. And it’s that care that really defines us and… the difference between buying online and buying from us.”

While the two have continued paying their part-time employee, they stopped taking paychecks themselves. To make up for some of the lost revenue, they started a GoFundMe that has raised over $3,000. Claiming to have “applied for every grant and loan available” and having only been approved for one, they credit the GoFundMe with allowing them to pay April’s rent. Still, their GoFundMe presents a harsh reality: if non-essential businesses are unable to fully open until fall, they might not be able to survive.

When and if they are able to reopen, Schneider and Rosso-Schneider fear that their business model will have to change.

“We do a lot of events and in our first year we did 75% of our events completely for free,” said Rosso-Schneider. “We literally are not in the place where we can offer events totally for free to people. Because it was already something we couldn’t quite afford to do before — but community is such a huge part of what we believe in.”

“We’re able to build an activity room so we could do more book clubs and poetry readings and, of course, all of that is moot right now. But we’re moving anyway. So, maybe not the smartest thing to do but it was sort of already in motion,” said Beddingfield. “It’s pretty damn risky at this point, but I just have to be hopeful and we have a lot of good community support and hopefully that will help.”

Beddingfield opened Inkwood Books in 2015, following in the footsteps of her older sister, Stefani. (Stefani Beddingfield owned Inkwood Books of Tampa, Florida from 2013 to its closure on March 31, 2020.) Currently, Inkwood Books is the only full-service, non-seasonal bookstore selling new books in South Jersey.
“It’s that community building that I think bookstores provide. Which, I think is why bookstores, at least up until the plague, were doing okay. Obviously, that’s a big thing that we can’t do right now. I mean, we can’t even do our book club,” said Beddingfield. “Not being able to gather for those kinds of events, it’s hard.”
Though one of the main reasons for Inkwood’s move was the larger event space, Beddingfield fears that there will be restrictions for a long time, even after non-essential businesses are allowed to reopen. But the show must go on, and Beddingfield has quickly pivoted. Having hoped to have a large in-store moving sale, Inkwood is instead selling dozens of themed book bundles at a discount on the website.

With sales down around 40%, Beddingfield is thankful that she already had an e-commerce site set up. (Though she finds being just an online bookstore to be “not as interesting” and misses handselling books.) Unfortunately, online orders cost more on the bookstore’s end.

“The cost of those sales is much higher, because we’re having more packaging, more shipping. Everything’s electronic, which means credit cards, which means credit card fees. And then the web processor takes a cut,” said Beddingfield. “So by the time everyone’s taken a cut, the profit from sales, for the sales that I am getting, is less than I would be getting if they were sales in the store.”

While the website links to the warehouse and not to the store’s inventory, Beddingfield drops off or ships books that they currently have in inventory. With around 10,000 books in-store but only a couple copies of each, the inventory is “constantly fluid” and, due to that, hard to keep up with online.

To make things even harder to keep up with, Beddingfield sent all her booksellers home and closed the store to customers five days before the governor mandated it. In their small space, Beddingfield was worried about observing social distancing. So, in a callback to the familial nature of the bookstore’s start, Beddingfield and her husband drive around delivering books and her teenagers walk to deliver close-by orders. (Delivering books themselves makes more sense cost-wise as they do not have to pay for packaging and delivering. And, as they only deliver what they have in stock, the margin is better.)

“I was hoping to get some of this funding to pay my staff. I mean, the most important thing to me is to keep them, because I have really great staff,” said Beddingfield. “I have yet to get any of those grants, but I’m still trying.”

Inkwood usually relies on Haddonfield’s walking traffic — where people walk by the bookstore and decide to look around. Understandably, that is not happening right now. In addition to the lack of spontaneous visits, Beddingfield has seen a change in what books are selling. Along with activity and sticker books for kids, best-seller sales have increased.
“Whereas before, we might have been selling things that aren’t just on the best-seller list, what we’re selling now is a lot of best-sellers, Oprah’s Book Club books, that kind of thing. And so I have been ordering in those books, because they’ve been selling, so I have them in stock. And then when somebody orders it, I’m able to fill that in the store faster,” said Beddingfield. “So it’s been different. I miss selling the deeper list.”

Beddingfield also finds that selling books online is not as accessible to her elderly customers.

“I have a lot of older customers who can’t figure out how to order online. And I’m not at the store as much to answer the phone. If I can answer the phone, I can do it over the phone and I can figure out how to get the book to them. Or sometimes I get on the website for them with them on the phone. But I’m not there as much,” said Beddingfield. “And I really feel that the older customers are probably hurting the most, which is really sad because they’re also shut in the most. They’re the ones at higher risk.”
Overall, Beddingfield is grappling with the idea that everything is going to take a long time to get back to normal. If some form of social distancing continues until well into next year, Haddonfield’s annual holiday celebrations may not be able to take place.

“That’s a big time for us, when we get to Christmas time. If you can’t do candlelight shopping and have people come in for the wine and the cookies while they’re shopping and it’s crowded full of people, if we’re not able to do that, it’s going to be a big hit. And I just don’t know. I kinda don’t want to think about it,” said Beddingfield. “I’m trying to figure out ways to be prepared for it, and think about out-of-the-box ways that we can be prepared for it and deal with it. But I think that’s going to be really tough. And I think people are going to be craving this exact kind of community that we’re not going to be able to have for a while.”

It all comes back to community. Bookstores are built around community — author events and readings and book clubs are a huge part of what A Novel Idea and Inkwood Books do. And the book community has rallied around independent bookstores in the past months.

The #SaveIndieBookstores campaign started when best-selling author James Patterson approached the American Booksellers Association (ABA) in an effort to help indie bookstores during COVID-19 and donated $500,000 to start fundraising. The ABA’s board and staff launched the campaign together with the Book Industry Charitable Foundation (Binc) and Reese’s Book Club.

Many authors have gotten behind the campaign, including Rick Riordan and Veronica Roth.

Other groups have hopped onto the bandwagon: Libro.fm, an audiobook distributor that partners with independent bookstores and fights against Amazon’s Audible for market share, raised over $98,000 for local bookstores through a membership campaign. Libro.fm has started another campaign called #SocksforBinc to help independent bookstores that are struggling because of COVID-19. As of April 28, they have sold over 3,000 pairs of socks and raised over $22,000, according to the ABA.

“I want it to last. I want people who are supporting small businesses right now, maybe that’ll stick,” said Beddingfield. “You feel like you really made a difference because you have.”

Novels of the Coronavirus is an ongoing series covering the effect of COVID-19 on local authors, booksellers and publishers.