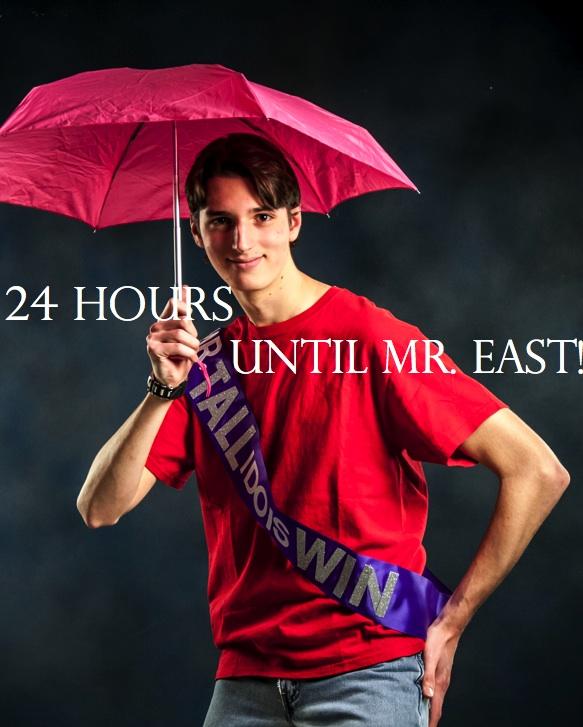 Jordan Schmidt’s Mr. East name requires no explanation. In the hallways, it’s impossible to miss him. At a height of 6’6″ and skinny enough to be a veritable beanpole, Schmidt towers above almost everyone else.

In fact, you might have seen him in other places besides the hallways–for example, accepting stories at F087 as an Eastside staff writer, or playing the largest bass drum in Marching Band on the field outside the school.

There’s much more to him, though, that the average spectator won’t be able to see.

Schmidt has Asperger’s Syndrome, a form of high-functioning autism. He said that he suffered from this for many years. “I’ve had people say to my face: ‘Smitty, nobody likes you,'” he said. Then he added, “Sorry. Was that too much like an American Idol backstory?”

According to Schmidt, he “always thought it would be awesome” to try out for Mr. East. He had seen people in the show, knew friends who had performed, but most importantly…

“I think I have the most to prove,” said Schmidt. “This is my chance to be in front of the school and show everyone that I’m not what they thought I was.”

Schmidt’s act will feature some stand-up comedy and voice imitations. He hinted that his voice imitations would involve “possibly some very high-ranking people at East… a noted scholar.”

Despite the fact that the show hasn’t happened yet, Schmidt has already had a great experience. “The nine people I’m working with are hysterical,” he said. “So there are all these comedic opportunities and we’re bouncing them off each other.”

But, out of all of the candidates, Schmidt believes that he most deserves to win. “I think I’m the most genuine of the candidates. I mean, you look at them and think, ‘Who are they really?’ But I don’t gussy myself up. Who you see here is who you’ll see on the stage, in the hallways…”

“I just want to prove something to myself and a lot of other people,” said Schmidt. “…I want people to think, ‘Not only is he a tall guy, he’s a tall, funny guy.’”