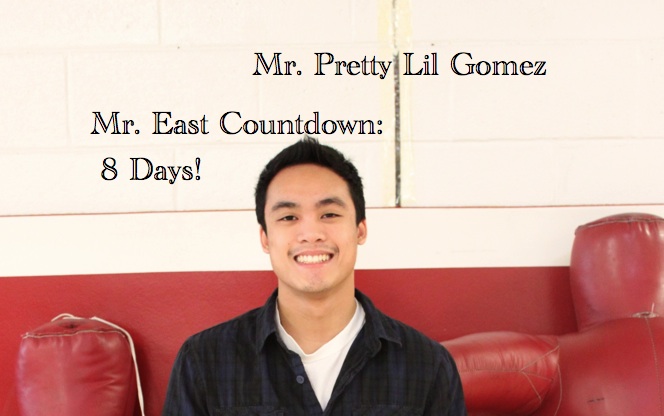 Whether he broke his leg or tore a muscle, nothing could stop Aaron Gomez (‘13) from competing in this year’s Mr. East competition.

Mr. Pretty Lil Gomez, a member of the wrestling team, was pinning his opponent during a match when he tore his labrum muscle in his shoulder. Mr. Pretty Lil Gomez did not, however, surrender to his injury but instead pursued his goal to participate in the competition.

“I had to agree with myself whether to [participate in] Mr. East or not,” Mr. Pretty Lil Gomez said. “I’d rather look back and [say] ‘Yeah I did Mr. East’ than regret it in the future.’”

“I’m a people-person… I’m not limited by clique. I have no barriers in socializing with people,” Mr. Pretty Lil Gomez said.

Mr. East enticed him even more because it would enable him to receive positive attention from his fellow peers.

“I want people to know that I’m a friendly person and they should never be scared to approach me [because] I’m always willing to understand their situation and get to know them,” Mr. Pretty Lil Gomez said, “I feel like Mr. East should be a representative of the student class and I feel like I represent that really well.”