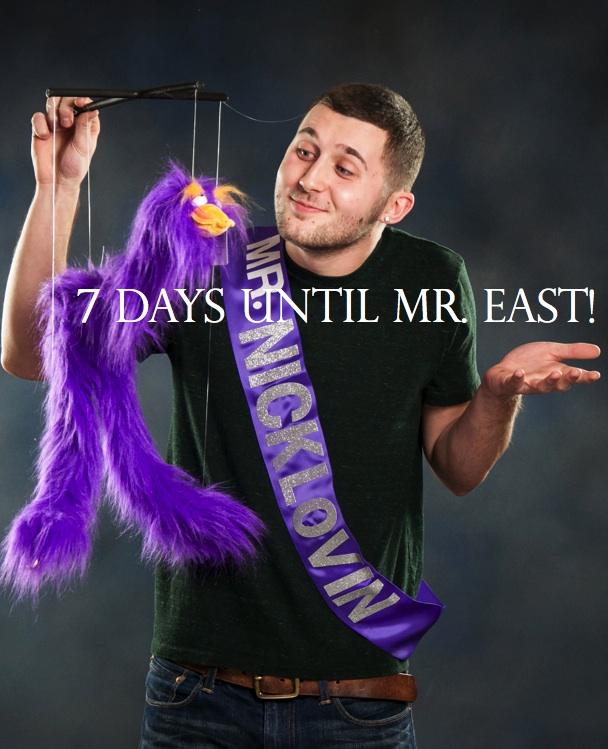 Nicholas Joseph Ignacio Ciocco (’14), otherwise known by his moniker, Mr. NickLovin, has big plans for his life, which includes his performance in Mr. East.

While at East, he has participated in a variety of activities, including soccer, choir (Casual Harmony and East Singers), varsity baseball all four years and Eastside.

“I think my biggest accomplishment [at East] is the fact that I am well-rounded. I’ve pretty much made the top of every group that I am a part of. Baseball, that’s always been my thing, but then once I figured out that I like journalism, I become an editor on the [Eastside Editorial] Board. Also, I’ve been in the top choir for two years. So I am very grateful, that I’ve been able to succeed,” Mr. NickLovin said.

When his time at East comes to a close, he has quite the plans for his life. Mr. NickLovin plans to study biology and pre-dental in college.

“I would like to become a dentist,” he said.

But becoming a dentist isn’t his only goal.

“I have a lot of different things that I want to do before I die, and I have some time, I think, before I die. I want to have my own dental practice where I can perform my dental surgery, but before that, I would like to try to play professional baseball. I think I have a pretty good shot if I work hard enough. So playing professional baseball is a big goal of mine. But also, I want to have my own barbershop because I have an affinity for cutting hair.”

Something most people probably don’t know about Mr. NickLovin is his “affinity for cutting hair.” He cuts his own hair as well as his brother’s and friends’. Mr. NickLovin hasn’t been to a barbershop in five years.

Something else that’s unusual about Mr. NickLovin is his preference for being barefoot.

He said, “I do like to be barefoot. I think I would wear shoes here [at East] because the hallways are disgusting. Anywhere [else], like outside, I wouldn’t wear shoes. I like feeling different textures on the bottom of my feet.”

Other hobbies including whittling, which he claims, is “actually really fun,” and delivering pizza, as he has been working at a pizza place since the fall.

Mr. NickLovin loves Spongebob, and lives by the quote, “when in doubt, pinky out.”

“Anything Spongebob, really, just makes me happy,” he said.

“I just think she is the kind of person every one should try to be. She’s always happy and always looking to give to other people. [That’s] something I want to do myself.  I feel like if you give to people, you will get it back in any way, even if it’s just time. I just think being a genuinely nice person takes you far in life,” said Mr. NickLovin.

When it comes to his Mr. East performance, Mr. NickLovin is keeping his plans for his performance secretive.

He said, “I believe my talent is unlike anyone else who has ever been in this competition before and I feel like my entire Mr. East set, including swimwear, formalwear and talent portion is just going to be so organized and tightly put together, I just feel like I have what it takes to prevail.”

Mr. NickLovin has enjoyed the entire Mr. East process thus far and is confident in his ability to win on March 28.