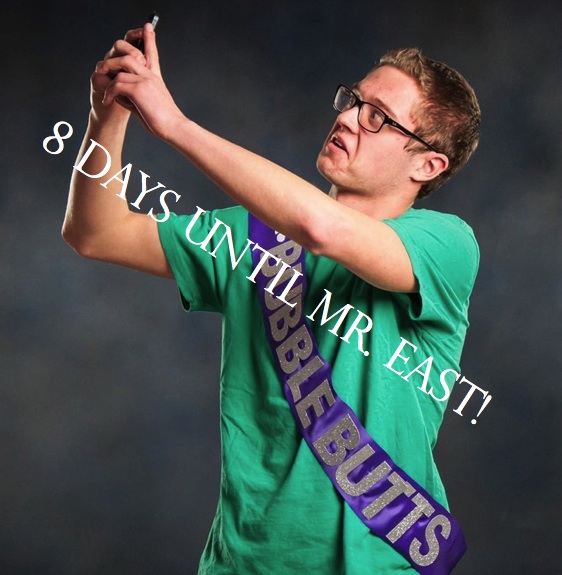 Cameron “Mr. Bubble Butts” Butts is one of the ever so talented Mr. East contestants this year.

Butts is a senior at East who decided to compete in this year’s contest because he “enjoy[s] making people laugh and [he] want[s] to make people laugh.”

According to Butts, the crowd will definitely be laughing during the show and should expect lots of dancing—good and bad—including crazy booty popping.

It is probable that you already know Butts, due to his huge involvement at East between being a crucial part of the Boys’ Swim Team, avid member of East’s Habitat for Humanity Club, and a representative of his class in SGA. However, you probably do not know that he says he “can juggle well,” which is another pastime of his that he prefers to do on the down low. The most interesting thing about Butts is that he really enjoys his house pets, which, if you are friends with him on Snapchat, you should already be aware of.

He describes himself as “someone who’s fun-loving, seeking adventure and trying new things, trying to find the good in people, and staying really positive.”

After high school, Butts plans on attending college in order to “set [him]self up in a position in life where [he’s] doing what [he] like[s] to do.”

In general, Butts claims that you can expect to see a “grand performance” if you are in attendance for the Mr. East pageant this year. Specifically, Butts describes his own act as a “quest represented through Snapchats.” He also includes that there will be a lot of dancing, funny moments, sad moments, and tough moments, but “it’s okay, we will get through it,” he concludes.

Butts wants David Aningalan to be crowned Mr. East if he himself cannot win because “[David] is really good at dancing.” Although there is some favoritism of Butts toward Aningalan, Butts assures that “[all of the contestants] are awesome.”

Be sure to catch Butts on his quest of Snapchats during the Mr. East Show on March 28!