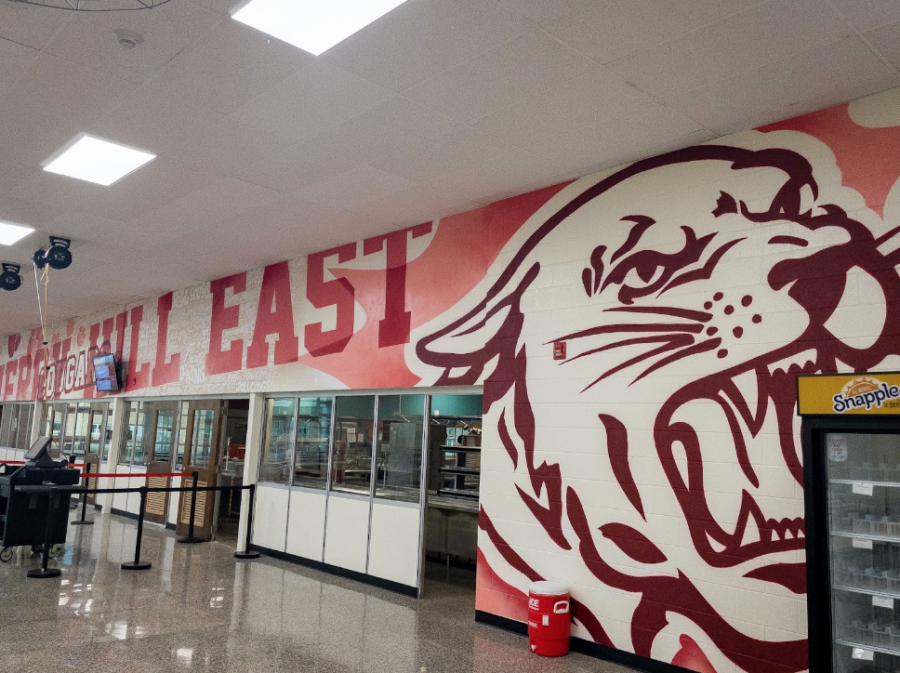 East's new mural is displayed in the cafeteria.

As students return back to school this fall, many may have noticed the interior and exterior renovations occurring at East. Not only has East recently introduced an eye-catching new mural in Cafeteria 1, which was donated by the recently graduated Cherry Hill East Class of 2020 and Class of 2021, but other renovations have also been made to the school over the past year. Both cafeterias have been repainted, as well as the Annex, A-Wing, and some F-Wing classrooms. During these renovations, many of the old murals from the 1960s and 1970s were painted over and covered, and will soon be repainted with new artwork.

Last year, Mr. Charles Davis, the Cherry Hill East Director of Activities, organized a committee of teachers to have discussions about reimagining and creating a new vision for the interior of East, including developing ideas for unique murals and artwork in the halls.

“This school is a living school,” Davis said, “[and] we don’t want the interior of the school to be the same as it was 40 years ago.” In his vision for East, Davis hopes for the murals to include symbolism, and “things that reflect the character and diversity of the student body.”

The mural projects will heavily involve partnership and input from East students and staff. In contrast to the recent mural painted in Cafeteria 1, which was done by a professional artist, students will do the majority of the painting for future murals and artwork in the halls. “If there’s no students, there’s no murals,” said Mr. Lou Papa, an East Assistant Principal.

Davis says that he hopes a reimagined East will help give pride and a sense of ownership and belonging to students. One particular mural will go up at the back of F-Wing, across from the locker rooms. As students and staff round the corner into the F-wing, the mural will essentially welcome them to the artistic sector of the school with bright colors and bombastic images representing the courses taught in the wing. The mural is currently in a state of development.

Both Davis and Papa agreed that the mural painting projects will be continuous and extend beyond the current students at East. “As new classes pass through East, they will want murals that reflect their generation,” Papa said.