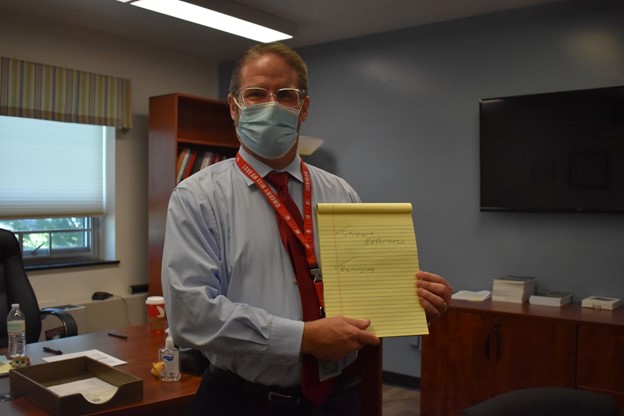 Five years ago, Dr. Dennis Perry arrived at Cherry Hill High School East as its new principal. He had a plan, he told Eastside in his first in-depth interview, back in October 2016. Perry said he was here to stay. Today, the same is true. Perry is entering his sixth year at East in a unique and challenging time for education. He once again spoke with Eastside about a wide range of issues past and present, reflecting on his first five years while looking forward to the next five.

Perry’s first half-decade at East, especially in its earliest years, was largely characterized by growth and learning. When he arrived at the school in 2016, he wanted to respect the legacy of those before him while also looking for ways to make improvements. Today, he feels that he’s succeeded with that approach.

Perry’s roots in education stretch back to 1991, when he first started teaching math in North Carolina. To this day, Perry teaches regularly; he is currently working in the University of Pennsylvania’s masters program for aspiring leaders as well as New Jersey’s Leader to Leader program for school administrators. Staying involved instructionally has guided his administrative approach over the last five years.

“I view myself as an instructional leader — a teacher of teachers,” he said, noting that he holds four faculty meetings per month in which he works with another teacher to provide a lesson to staff members.

That instructional approach shines through in the way Perry describes the lessons he’s learned at East thus far. As many teachers encourage their students to do, Perry sought to break down his learning into themes and major upshots.

“There are really three big takeaways that continue to inform what we do now,” he said. The first was that learning is social. Perry reiterated the importance of capitalizing on students’ natural tendencies. Students learn best when they’re interacting with others, asking questions, and engaging with the content; Perry has made that a point of emphasis. Second, Perry said that East needs to focus on cognitively engaging students.

“As a student I was guilty of this myself — I’m very good at appearing like I’m listening to you,” Perry said. As a response to this problem, he’s worked with staff on ways to have students engage with their learning and make their thinking “more visible.”

Third and finally, Perry said “all of our students [need] to feel as though they belong here at East… At every graduation you hear ‘Cougars for life,’ right? And I want that to mean something for all of our students.” He explained that when students don’t feel they belong in a class, whether due to the presence of cliques or the approach of a teacher, they are not as “available for learning.” In response, he’s asked teachers to work on developing relationships with their students and to look for those who may need help finding that sense of belonging.

That idea of creating a welcoming environment played majorly into Perry’s reflections on key moments that occurred during his East tenure. Those included the 2018 events in which a conversation around gun violence combined with local issues to prompt student walkouts and controversy.

“That was a very tense time… it goes back to that need for belonging [and] relationships,” Perry said. He added that the presence of many new administrators at the time created challenging circumstances, as students lacked the relationships needed to express their concerns in more traditional ways and get accurate information. If a similar situation were to arise today, Perry believes it would play out “very differently.”

He also connected his three big takeaways to the latest events around social justice issues. Perry expressed pride in the leadership exhibited by students recently, from successful advocacy for a required African American history course to Asian and Jewish students’ efforts to fight increases in discrimination.

Student voice was a major focus for Perry in his tenure so far, with many of the accomplishments he hailed centering around the topic. In his 2016 interview, Perry said he would be a “cheerleader for the student body,” something on which he now says he’s “done well.” His engagements range from meeting with students often to attending as many student events as he can, he said. Another issue on which he credited student voice with driving success was the opening up of lunch break periods to allow more flexibility for students in how they spend their time.

Overall, Perry feels that things at East are in a good place after his first five years of leadership. After much listening and learning, he hopes to continue translating the lessons he’s learned into success.

Despite the success he’s had, Perry recognized that East is facing significant challenges going forward. The COVID-19 pandemic and over a year of mostly-remote learning set back some of the progress made in past years at East.

Speaking about the school’s culture, Perry said “I’m very concerned, to be honest with you… that what we had here may not return.” He said that 18 months of living differently has created different habits, routines, and priorities for both students and staff. While he said those things are not bad, they pose challenges to the recreation of a robust program of extracurriculars.

“As the principal of a high school, I need people here,” Perry said, noting that he’s made it a priority for staff to be at many school events and activities throughout the year. Re-establishing East’s culture will be a major priority in the year ahead.
As for other impacts of the pandemic, Perry said “by-and-large, we are as normal-functioning as we can be in the school.” He hopes that some current precautions, such as the assignment of homerooms in which students must stay for half of their lunch break, will eventually become unnecessary. Overall, the situation remains fluid.

“What they’re projecting — sometimes I hear [and] I’m like ‘Oh, great!’ and others you’re like ‘Aw, jeez,” Perry said, speaking about the ever-changing nature of pandemic projections.

The situation around COVID-19 is not the only thing changing around the East community, with Perry looking ahead to a variety of different developments. At the time of his interview, Perry was waiting on desk shipments to deliver the much-awaited change to East’s seating situation. With many students having spent early weeks of the year sitting in scattered chairs, on radiators and floors, or nowhere (instead standing throughout classes,) the delivery of new desks marked a major improvement. Perry said that the situation was largely out of administrators’ control, with widespread shipping delays driving the issue.

While the desk problem has now been resolved, some issues remain open-ended. As Eastside first reported in June, traditional final exams will not return at East. The status of what type of final assessments will replace them, however, remains to be determined. Perry said some kind of portfolio-based assessment will be used.

Ultimately, East faces many of the same challenges as other schools across the country. From the pandemic to social issues, students, staff, and administrators alike are living in unprecedented times. The future of education may be more uncertain than ever before. Despite all that, Perry can hope that the work he’s done over the past five years will allow for a successful return to the pre-pandemic East environment and culture he was building.

Make it a great future, or not — the choice will be Dr. Dennis Perry’s.