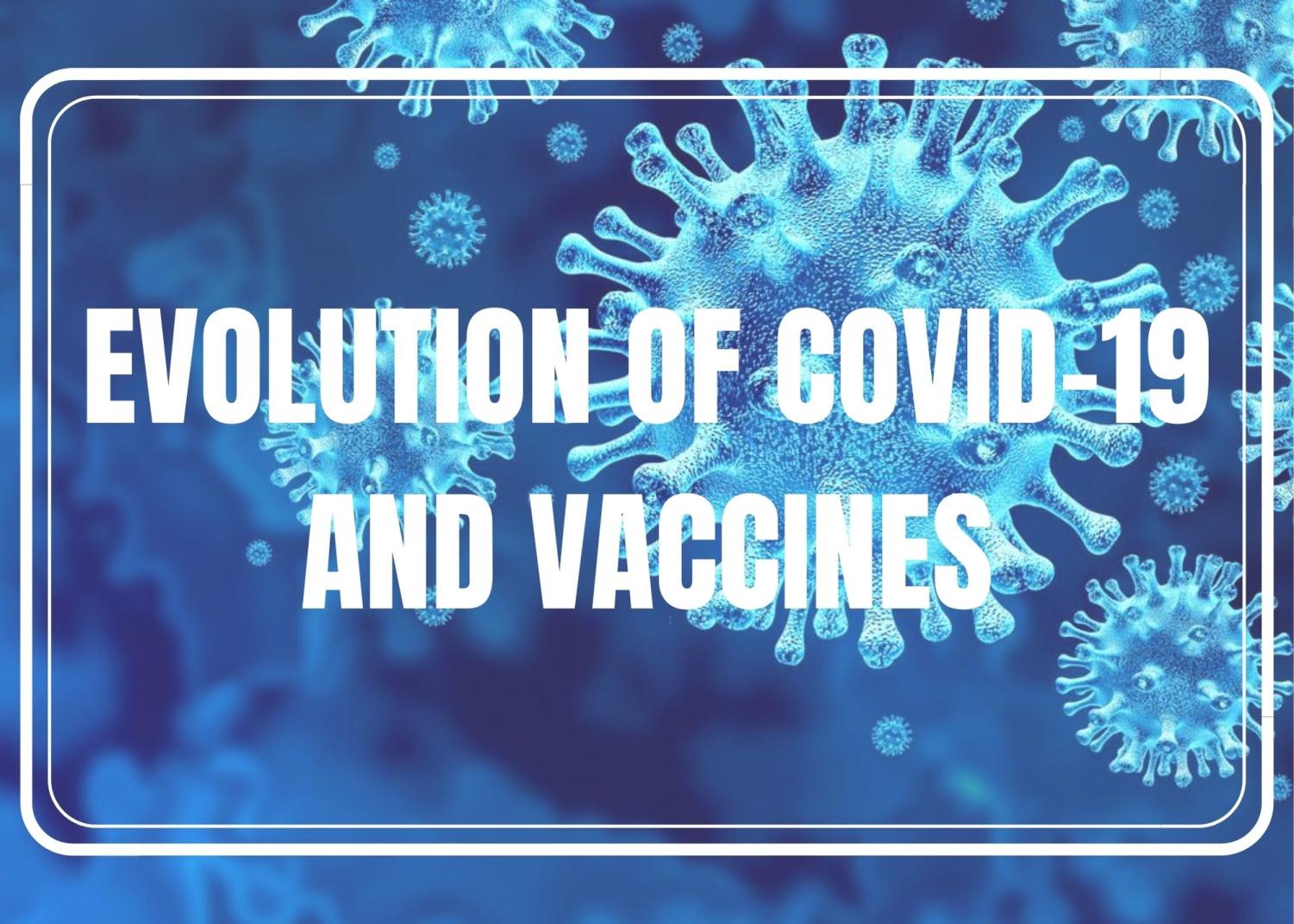 Evolution of COVID-19 and Vaccines

The COVID-19 pandemic first affected Cherry Hill High School East in March 2020, causing students’ last day of school without pandemic safety procedures to be Friday, March 13, 2020. Since then, the pandemic and its severity have evolved; however, solutions have evolved as well. Today, students are able to attend school with pandemic safety procedures in place, such as masks and vaccines. However, COVID-19 continues to be unpredictable, as new variants spread around the world and students try to stay safe.

COVID-19, caused by the SARS-CoV-2 virus, is not at an all-time high anymore. However, new enemies have spiraled into our midst which is recognized as the new “variants of interest” right now. This is because viruses are constantly changing through mutations, alterations in the virus genes, causing variants to emerge. According to Johns Hopkins, mutations of a virus are inevitable; the new COVID-19 variants are very much not unexpected given that it is an RNA virus. This begs the question of what are some of these new variants and how serious are they?

Multiple were recently found in areas such as Brazil, England, and California, however, the Delta variant is dominating the world as of right now and is labeled as a “variant of concern” by the World Health Organization (WHO) and the Centers for Disease Control (CDC). Delta, the dominant strain of SARS-CoV-2 in the U.S, was first discovered in India in December 2020 and it made its way to Great Britain and then to the U.S. This strain is said to have similar effects as COVID-19, however, the degree of illness can be much more severe. Yale medicine claims that the Delta Variant is “twice as contagious” as other variants that have recently surfaced, and it can dangerously affect those who have not been vaccinated with FDA-approved vaccines.

“It is estimated that the average person infected with the original coronavirus strain will infect 2.5 other people… In the same environment, Delta would spread from one person to maybe 3.5 or 4 other people,” says Yale Medicine epidemiologist F. Perry Wilson. This increase in transmission, along with an outrageous amount of hospitalized cases in areas of the country that have low vaccination rates, has caused this variant to result in more deaths and raises concern for younger children and adults as well.

The reason why variants are so concerning is that the mutation affects the coronavirus’s protein spikes, allowing the virus to more easily attach to cells of the nose and lungs. Thus, it makes the virus more easily spread if no cautionary measures are taken. Another note to consider is that despite being vaccinated and lowering the risk of infection, a vaccinated person who catches the virus can still transmit the disease to others.

Another variant that made its way to the people is the Mu variant. Thankfully, this strain surfaced and disappeared rather quickly. For a time in the months of March, April, May, and coming at a high of 2% of cases in June, Mu was reported in the single digits. However, Mu cases began to drop until there were very few cases being reported in the U.S. The reason why Mu was so concerning for a time is that it threatened immunity and was able to reproduce very rapidly.

“Based on a large number of escape mutations, it is extremely reasonable to expect that this variant might pose a threat to populations with increasing numbers of persons who have become vaccinated and/or previously infected,” says Medical Doctor Robert Shaffer. This is because of the threat to the immune system during this time.

Delta still remains the dominant variant which is contributing to “more than 99% of COVID-19 cases,” according to Yale Medicine. As of right now, the CDC labels the Mu variant a “variant being monitored.” There are also many more strains constantly surfacing and variants that have already made an impact such as the Alpha and Beta variants.

However, the CDC urges people to get vaccinated in order to not contribute to the spread of the virus in the U.S and internationally. Those who are vaccinated have fewer grave outcomes from catching the disease and as more states become vaccinated, the variants are less likely to spread. 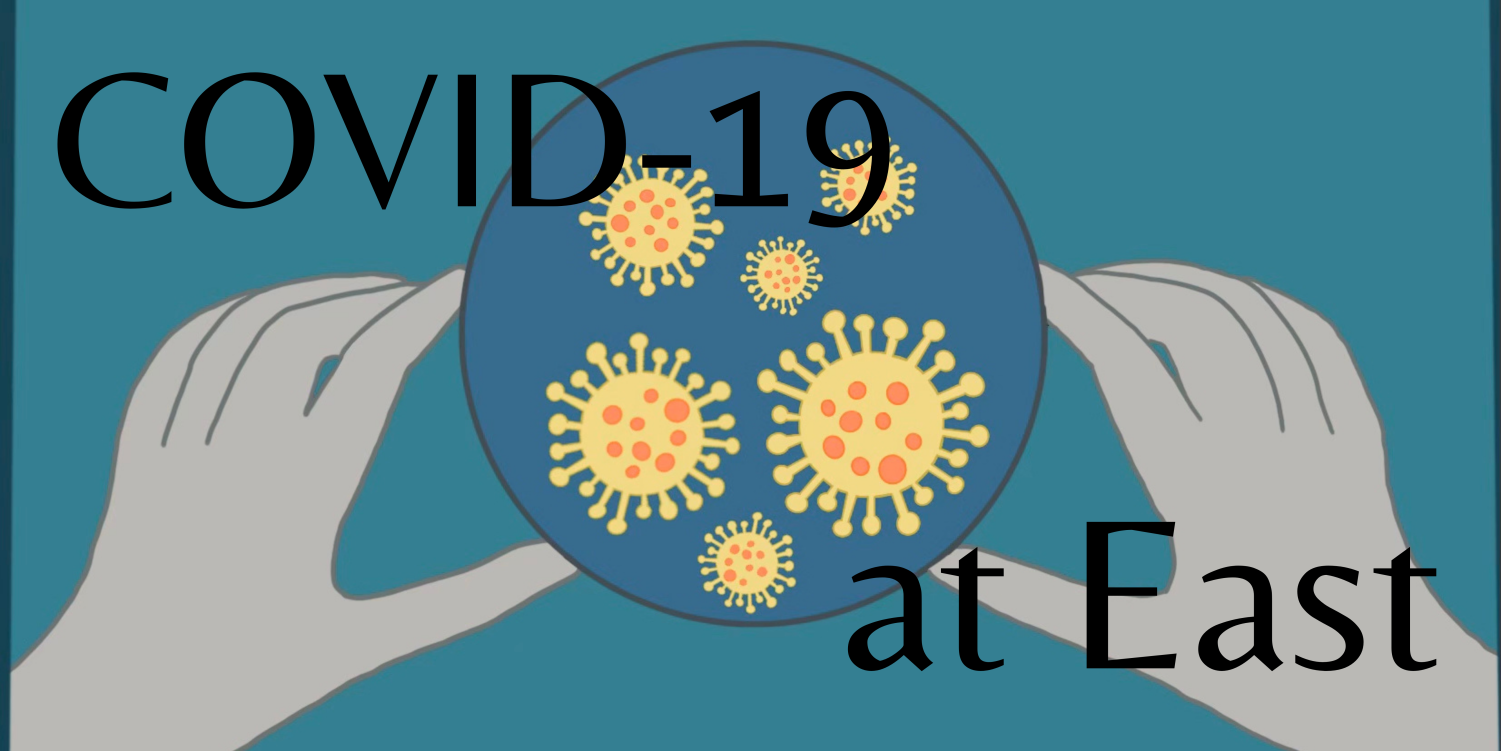 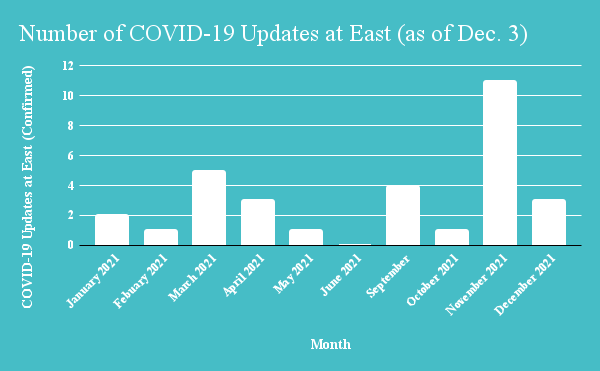 Scientific data shows that vaccination and testing requirements, coupled with strong masking policies, are the best tools for keeping our schools and communities safe for in-person activities.”

Vaccine hesitancy comes from all around the board. In an interview conducted by the ABC, a health care worker named Jessica stated that she was prepared to lose her job in order to not take the vaccine. “We all have a choice [to take the vaccine]. I don’t think it should be for everybody.”

Many who work in hospitals have seen the worst of the worse, so why would they choose to abstain from the vaccine? The primary reason is that they don’t trust the vaccine due to the lack of testing and research. Despite the vaccine’s FDA approval, many believe that there has not been a sufficient amount of time to see the long-term bodily effects of the vaccine. In hospitals, workers have seen numerous patients come in due to adverse side effects stemming from the vaccine. Naturally, this has increased their skepticism and decreased vaccination rates.

Despite this, many New Jersey residents are supportive of the vaccine mandate.

Ms. Elizabeth Breen, a chemistry teacher at East, gave her approval of the vaccine mandate. “I think and hope that the mandate will bring us closer to getting back to a normal school environment at East,” she says.

Ms. Susanne Casey, an AP Physics and Infectious Diseases teacher at East also stresses the importance of getting vaccinated. “SARS-CoV-19 is an airborne, communicable disease. Vaccination is an important step in keeping our population safe,” she says.

The vaccine mandate issued by Governor Murphy is in an effort to convince those who are still on the fence, to go get vaccinated. “Scientific data shows that vaccination and testing requirements, coupled with strong masking policies, are the best tools for keeping our schools and communities safe for in-person activities,” said Governor Murphy.

Due to its rushed production, many were wary of the vaccine and unsure about its safety, wanting to wait until it received FDA approval. Yet even after its approval on August 23, many were still hesitant to get it. By issuing a vaccine mandate from Governor Murphy, the hope is to finally sway the small percentage of people left to get the vaccine.

With the executive order now implemented, those who fall under the umbrella of school or state workers who still haven’t received the vaccine will be subject to weekly COVID-19 tests. The executive order encompasses all state and school workers, even private and charter schools, as well as any part-time workers or volunteers that make regular visits to schools. Any state workers who work from home are expected to be vaccinated. However, testing will not begin unless the worker comes into the office.

This order also clarifies which medical conditions allow students to be exempt from wearing a mask in school. In order to be valid, the school must provide some sort of written documentation from a qualified medical professional.

Some schools in the New Jersey area have already been implementing vaccine mandates independently. For instance in Newark, all city employees must be vaccinated. There is no opt-out or testing option. Rutgers University has also implemented a similar mandate for its employees. The school announced that all workers have until December 8th to get vaccinated.

East students attempt to stay safe at school during a pandemic

Booster shots should be taken six months after the second dose of the Pfizer vaccine is taken.

I’m always squeezed between a lot of people and some don’t wear masks so you never know if someone is sick, and there isn’t any way to go around it.”

Entering the doors of high school is an anxiety-inducing experience for many students during a normal school year. Currently, instead of thinking about upcoming tests and textbooks that need to be read, students have to worry about contracting a dangerous virus that could potentially put the lives of their entire households in danger.

Some health precautions have been put in place, such as mandated mask-wearing, however, social distancing is impossible to maintain within the hallways of East due to the number of students enrolled.

Grace Renshaw (‘23) says, “I’m always squeezed between a lot of people and some don’t wear masks so you never know if someone is sick, and there isn’t any way to go around it.”

Another concern many students and parents have is the lack of control during the lunch breaks. Recently, East’s administration implemented a “lunch and learn” model, where students are supposed to eat in any of the designated areas during one lunch break, and then go either to a classroom, gym, or outside during the other. However, during these times students often stay in one place for the entire hour without their masks on, and other students roam the halls unmasked without supervision.

“It could definitely be better organized,” says Renshaw, “the main problem is that the tables in the cafeterias and annex are so crowded that there’s sometimes nowhere else to go, so maybe splitting up lunch breaks into when [students are] supposed to eat would help.”

If possible, students should try to eat outside and limit the amount of time they are not wearing their masks while eating. Eating in small groups spread apart would also be advantageous.

In order to combat the spread of COVID-19, students need to take responsibility for their own actions. Instead of taking masks off as soon as an adult is not around, students must maintain their integrity and put the well-being of others before themselves. Parents must also hold some responsibility and make sure they are not sending their sick children to school. Maintaining COVID-19 protocol regarding necessary testing and quarantining will also greatly help reduce the spread of COVID-19 in schools.

During after-school activities, it is even more important to stay vigilant. The Center for Disease Control and Prevention still recommends that “schools should cancel sports and unmasked extracurricular activities or make them fully virtual”. Therefore, those on sports teams need to limit their exposure outside of school in order to protect their teammates and coaches.

The Docket app can be used by people living in New Jersey and set up using easy steps.

Nowadays, a COVID-19 vaccination card has become a staple in everyday life for many. It’s required for a wide range of activities, from concerts to international travel to sporting events.

However, the app is planning updates to allow users to access their full immunization histories, meaning it could also be used to supply proof for other vaccinations (such as influenza vaccinations) in the future. Docket is currently only available in New Jersey, Utah, and Minnesota, but is preparing for rollout in additional states. Docket is available in the App Store or on Google Play.

After installing Docket, I found that it was very quick and convenient to sign up for an account and look up COVID-19 vaccination records. However, users must be at least 18 years of age in order to search for an immunization registry using Docket, so for students, creating a shared Docket account with their family (rather than creating their own individual account) would likely be the most effective way to use the app.

In my experience with Docket, shared accounts are fairly straightforward and easy to manage, and users are able to toggle back and forth between different family members’ vaccination records with ease. Overall, Docket can serve as a useful tool for the community — including East students and their families — as we navigate the return to normalcy amidst the COVID-19 pandemic. 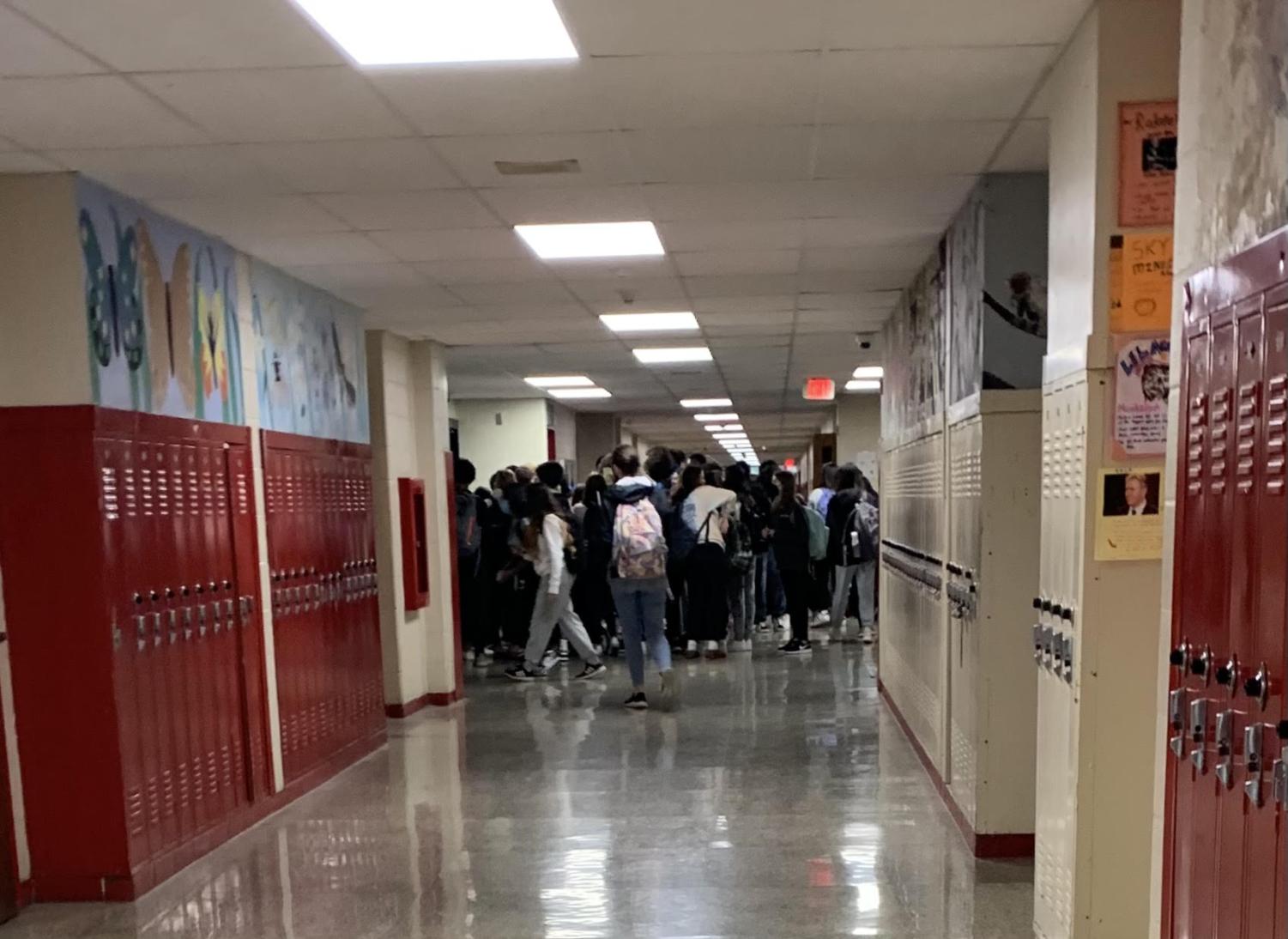 Students crowd the hallways at East during COVID-19.

Students crowd the hallways at East during COVID-19.