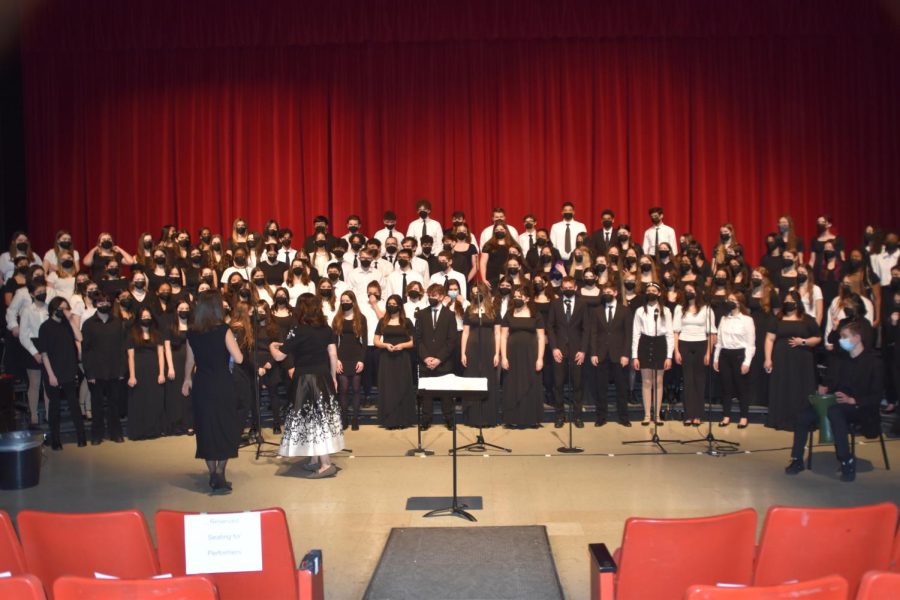 Students of the vocal department perform at Winter Concert.

Soloist Matt Malec(‘22) sounded nearly identical to Ben Platt’s Evan Hansen. Chansons continued to excite the crowd by doing the song “Hotaru Koi (Ho, Firefly)”, entirely in the dark, using flashlights to mimic fireflies communicating in the dark. The song ended humorously, with one firefly seemingly missing the end of the song and blinking late, earning a chuckle from the audience. Chansons then performed “How Can I Cry”, featuring a powerful solo from Lily Tewfik(‘24) and Nitya Busannagari(‘24).

East Singers performed a set of two songs back to back, with “Come Sweet Death” being about longing for death and “Ubi Caritas” about the afterlife. East Singers then performed “Water Fountain”, raising awareness of water scarcity and poverty throughout the world. Voce performed in their dazzling red with the songs “Build Me Up Buttercup”, “MLK by U2”, and “Go The Distance” (from Hercules).

Belles of East amazed everyone with an arrangement from Hailee Connors (‘22) of Taylor Swift’s “All Too Well” as well as “Super Trouper”. Stay Tuned excited the crowd especially with a mashup of “Sweet Dreams (Are Made of This)” and “Sucker” by the Jonas Brothers, with a stunning solo from Lily Tewfik(‘24). Faith Kidd’s(‘23) solo in “If You’re Out There” ended the night on a magical note, leaving the audience excited for East Choir’s next performance.