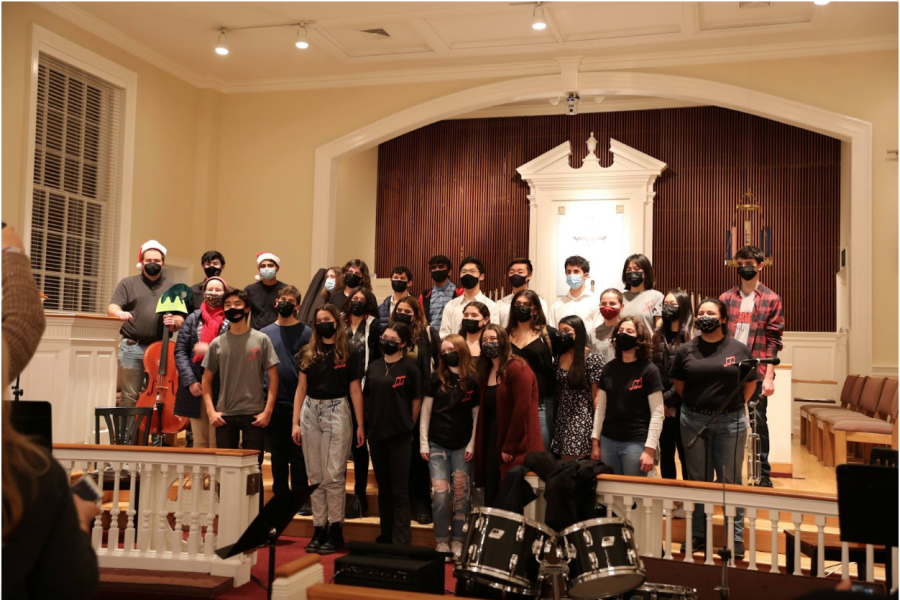 A winter night became all the better when East’s own Musicians on Call (EMC) took the stage for nearly two hours at the Lutheran Church of Our Savior on December 18, 2021.

The wide variety of musical talent included ‘Burnt Espresso’ from Alison Maier (’23) and her ukulele, followed by a well-done rendition of ‘Carol of the Bells’ by Josh Gray (’23) on piano and Sehaj Varma (’24) on violin. Kami Edens (’24) then gave a touching vocal performance of ‘Winter Song’, followed by a remarkable display of skill as Christopher Shin (’23) and Katrina Veltman (’23) delivered Beethoven’s ‘Sonata in D Major for four hands. A stunning version of ‘Stormy Weather,’ sung by Brooke Warren (’23), along with Jeremy Raden (’24) on the piano, led right into ‘O Tannenbaum’, by a well put together Shin (piano), Rachel Gates (’22) (bass), and Max Venuti (’23) (drums). Varma then returned for a solo performance of ‘O Holy Night’, before Grace Pierlott (’22) delivered a graceful recital of ‘I’ll Be Home for Christmas.’ Veltman made a return, as she once again brought Beethoven to life on the piano with ‘Sonata No. 31.’

Even anime found its way into the concert with Allison You’s (’24) stirring version of ‘Winter Halatia’, followed by a skilled take on the classic ‘Frosty the Snowman’ by Raden (piano), Owen Speas (’22) (cello), and Jay Suchak (’22) (violin). Then came ‘White Christmas’, sung beautifully by Jane Herman (’24), accompanied by Veltman (piano). Melinda Wu (’25) finished the vocal performances that night with her powerful, operatic ‘O Mio Babbino Caro.’

Groups also performed jazz at the concert, with Raine Guidarelli (’24) (piano), Alexander Kang (’24) (alto sax), Christian Lee (’24) (clarinet), and Max Swartz (’24) (trumpet) performing a harmonious ‘Fly Me to the Moon’ by Frank Sinatra. Finally, the brilliant Jazz Standards Group rendered three songs impromptu: ‘Thing of Gold’, ‘September in the Rain’ and ‘Second Line’ in a grand finish. For closing, the vocal group Stay Tuned sang ‘Acapella,’ and the EMC board came out for a lighthearted recital of ‘Jingle Bells.’

Founded early in the 2020-2021 school year, EMC is a local group of musicians and students who aim to spread their love of music to the local community. Their large initiative since March of 2021 has been Project Crescendo: Helping Kids Make Music.

“The goal is to help enrich and benefit local elementary and middle school music programs because we want to think back and help the younger generations, especially those that are financially challenged to engage with music,” says Christopher Shin, President of EMC. “We’ve been doing fundraising concerts and benefit concerts like this one, we’ve also been collecting donations both online and in-person… doing apparel sales and other fundraisers as well…as well as free online music tutoring.” 100% of all funds are donated to EMC’s campaign, personified in Project Crescendo: “[The campaign] is going to be something that will build like a crescendo – so, start small, and grow larger, you can make a bigger impact,” describes Shin. Last year, EMC raised over 3,000 dollars in support of their cause, which the BOE approved for the school district.

As for the performers, they are in it for a variety of reasons. “Well I was actually the one that was a regular member of EMC and I saw that they were doing this winter concert…and I thought it was just a good idea to get everyone that, you know, I’m close friends with, really good musicians and, [we] just decided to work on the concert,” says Alex Kang, sitting down with Christian Lee and Max Swartz, his fellow performers.

But no matter the why, the preparations for the concert were very extensive according to all: “So, everyone would come to my house and so we would rehearse the song with one of my dad’s friends who is a good musician, and he helped us get all the stuff we needed.” says Max Swartz, talking about how he and his group prepared for the concert. Nor was management exactly easy.

“So we have like this little setup downstairs in the basement,” says Ved Chidrawar (’23), technical manager of the concert. “We got somebody to control the audio, the video, we had like a little recording and Livestream…going on through Instagram.”

Besides the technical aspect of things, the organization took immense effort: “You wouldn’t expect how difficult it is to manage a concert like this, especially when you have around 30 kids that you’re managing at a time,” says Rebecca Sabath (’23), stage director of EMC. No matter the difficulties, EMC will continue to make music in the name of accessible instruments for young children on their musical journey.

“Money should not be a barrier to pursue a passion,” reflects Eva Shim (’23), EMC’s internal director. “Because everybody deserves an equal chance at music, and it shouldn’t be too expensive…All of us musicians, we started in elementary school…and I can’t imagine what our lives would be without it.”