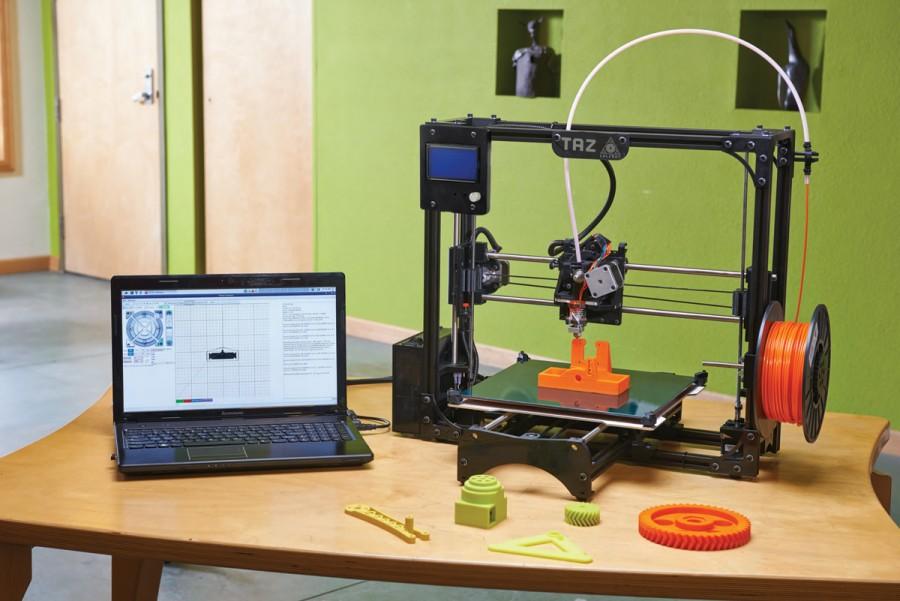 In late April of the 2014-2015 school year, the Cherry Hill High School East drafting department received a Three-Dimensional printer. Similar to how East is implementing this new technology, many other schools all over the country are beginning to receive 3D printers in order to supplement learning. Due to the rapid development and growth of the industry, 3D printers are becoming cheaper and more attainable for the general public. Consequently, more and more 3D printers are appearing in schools.

“I think [the printer] would have made [Drafting] a lot more interesting…and it would make it easier to see plans [on the computer],” said Eugene Lee (‘16), who took Drafting his freshman year.

As of now, the 3D printer is used solely in the Drafting class to create 3D solid models.

EJ Rorke (‘16), currently enrolled in the Drafting class, said, “[The 3D printer] makes the prints more realistic and easier to read when building.”

This printer helps students in class because they are able to see the images that they draw on the computer to scale. It helps students grasp concepts better and get a more clear and thorough understanding of what they are creating on their computers.

“[The 3D printer] shows you the scale of stuff and how to build it,” said Eric Sherman (‘18), a second-year Drafting student.

Sherman said that the printer has not been used yet this year in class.  Although the printer was calibrated last year and a few small objects were printed, they were not printed with much success.

3D printers also have extensive real-world application, outside of the classroom. They are used commonly in the healthcare industry to produce prosthetic limbs by printing human tissue. 3D printers can also bring architectural designs to life, in a realistic way because the prints are scaled. The entertainment industry also proved the 3D printer to be useful by using it to produce props.

“I think that [the 3D printer] is very beneficial because it takes things from being digital to reality, no matter what the size is, and in a short amount of time. It’s quite interesting how you can just turn…plans of the mechanical gear and then ten minutes later it’s in your hand and tangible,” said Adam Davis (‘16).

The last big technological advancement that the Drafting Department at East received was the Solidwork software. This software was received a couple of years ago and gave students the capabilities to draw 3D models on the computer.

So far there have been very few curriculum changes since the addition of the printer in the classroom. The printer supplements the class mostly for students by helping them understand concepts more easily and more in depth by getting a better visual of what they are drawing.