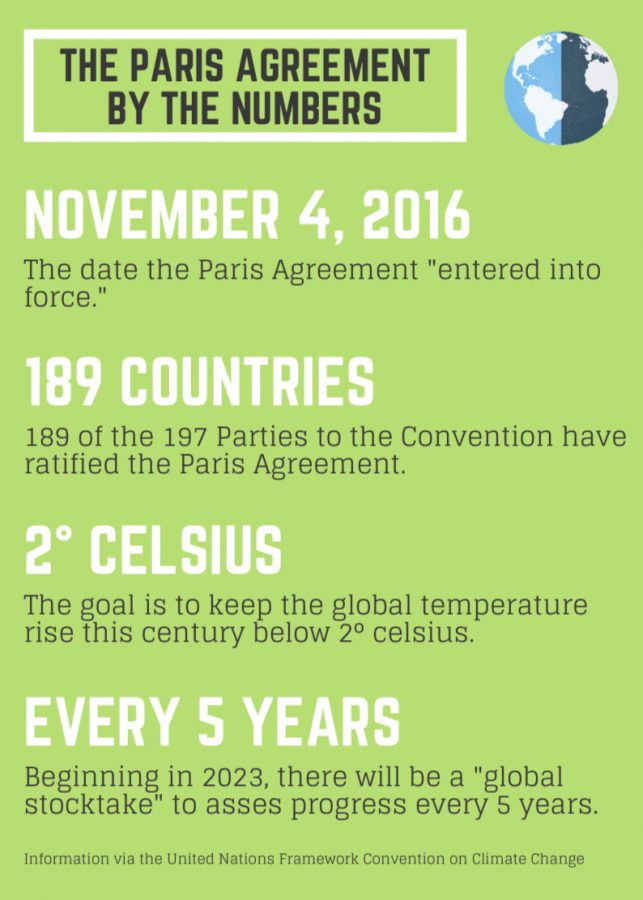 The Paris Agreement, a global agreement that entered into force in 2016, has the goal of "strengthen[ing] the global response to the threat of climate change."

In 2015, almost every country in the world signed on to the Paris Agreement, in which they agreed to work together to fight climate change. Unlike previous attempts to address climate change, the Paris Agreement did not tell countries what specific steps they had to take. Instead, those participating agreed to determine their own contributions and hold themselves accountable for the completion of these goals. These contributions, also called Nationally Determined Contributions or NDCs, will become more ambitious every five years.

Enter: East graduate Nate Warszawski (‘13). His team at the NDC Partnership, an organization created at the Climate Conference in 2016 to help prepare and continue countries’ contributions, focuses on those ambitions. In his job, Warszawski does some of the operations and contracting work that allows the NDC Partnership to work well with their partners. His specific project supports 65 of the over 100 countries who have signed on to the Paris Agreement.

“I think the most impactful part of my job right now is being able to help people make a difference in the climate space. Just because it is such an urgent and massive predicament. So to be able to help somehow is really awesome,” said Warszawski.

At Cherry Hill East, Warszawski’s experience in Model United Nations pushed him towards international affairs. While attending American University, which has one of the top ten international affairs programs in the U.S., he found himself drawn to the intersection between social justice and the environment.

“I didn’t really think about it as a career until later, when I was like ‘Oh, people do this stuff professionally, I could do it too!’” said Warszawski.

After a three-month stint helping economic development in Haiti, aided by the French skills he acquired at East, he moved on to a position in the World Resources Institute (WRI). After some time working in administration, he transferred to the NDC Partnership team.

Surrounded as he is by an environment constantly informed about climate change, Warszawski is sometimes worried that people do not understand the impact of their own contributions.

“I think it’s the same dilemma that people have with voting, when they say ‘my vote doesn’t matter.’ People think that whatever they do for the environment doesn’t matter. But the thing is, it totally does. All the cogs in the machine have to work together to make the machine work,” said Warszawski. “And it’s the same concept for climate change. So you [should] do your hardest to shop sustainably, to reduce, reuse and recycle, to get creative with what you have.”

Per Warszawski, one of the ways to have the biggest impact is to go semi-vegetarian. According to the WRI, if mushrooms were used to replace 30% of the beef in the 10 billion burgers Americans eat annually, the reduction of greenhouse gas emissions would be equivalent to taking 2.3 million cars off the road.

“Frankly, my family is from Argentina, meat is a huge part of our diet culturally. Giving up meat would be asking a lot of us,” said Warszawski. “But now I eat meat once or twice a week and that makes a huge difference.”

Additionally, Warszawski worries that current climate conscious movements are less-than inclusive. (Others seem inclined to agree: A year or so ago, a viral video of a turtle with a plastic straw stuck in its nose sparked a movement towards banning plastic straws. Advocates against the straw ban, including the Center for Disability Rights, pointed out that individuals such as those with mobility or motor-control issues needed plastic straws to eat and that straws made out of other materials may pose injury risks.)

“I’m really really nervous that in our frenzy to make sure that we become climate conscious and sustainable, that we are not being inclusive in how we talk about things. I think it’s cute that I’m gonna sit here and talk to you about ‘use less plastic’ but that is not sustainable living for some people…” said Warszawski. “People who come from underprivileged communities might not be able to afford sustainable food. So we need to think about ways that we can work with our public officials to make sure that everybody can be part of this climate movement to be sustainable and climate conscious.”

Although President Donald Trump announced America’s withdrawal from the Paris Agreement in 2017 (though said withdrawal cannot technically take effect until November 4, 2020), there are currently 25 states and 2 territories that are members of the United States Climate Alliance, a bipartisan coalition dedicated to upholding the objectives of the Paris Agreement.

“It’s disheartening that we’re not doing enough and that we’re not in the Paris Agreement as a country but it’s also super exciting to be around people who really do want to make a difference and want to try to do it in a way that includes everybody,” said Warszawski. “So I’m still optimistic, even in the face of absolute bleakness.”