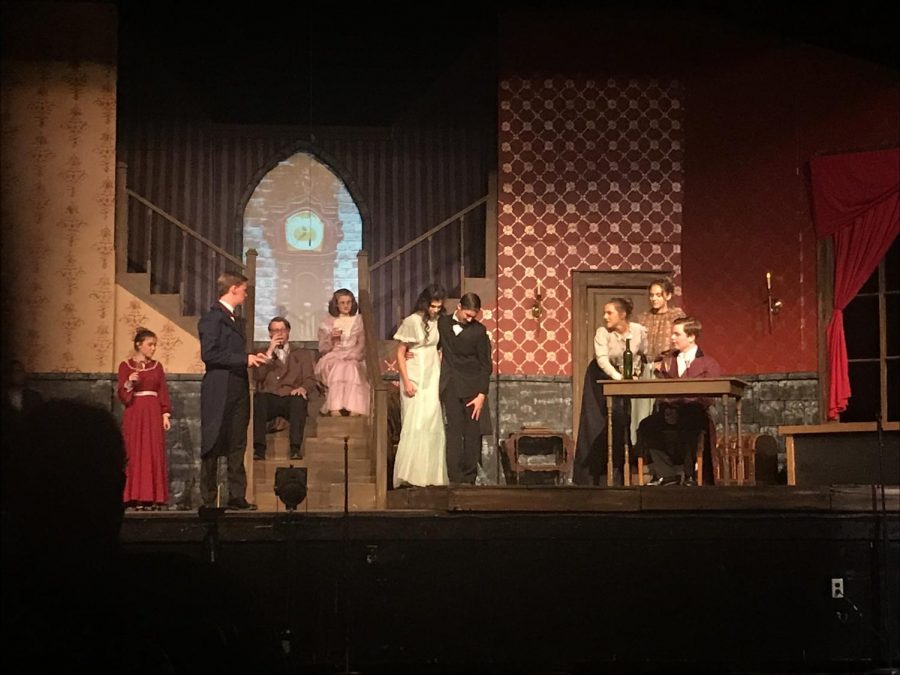 Every October, our appetites for horror seem to come back from the dead. Whether it be humanity today or hundreds of years ago, people can never get enough of scary stories. This year’s Crimson Theatre production and world premiere of “Re-deranged: A Night of Poe” brings a new interpretation of Edgar Allan Poe’s legendary tales that playgoers and fans of Poe both new and old can enjoy.

“It’s different from just straight up Edgar Allan Poe because I took a bunch of his stories and monster mashed them together so they can be a new version of that old classic story,” director and writer Pete Gambino said.

The curtain rises on a group of friends attending a 19th-century dinner party, with plenty of wining and dining to go around.  To escape the dreaded lull in the party, and a gruesome end due to the looming antagonist, known as the “Red Death,” the friends tell tales of gloom and gore, all of which are familiar for fans of Edgar Allan Poe’s iconic gothic narratives.  Characters from “The Tell-Tale Heart”, “The Raven”, “Annabel Lee”, “The Fall of the House of Usher” and many others from Poe’s recognizable stories come to life on stage.

“The main characters put on mini stories within the play, so it’s like a play within a play,” Gambino said.

The idea for the adaptation itself was born from the mind of Mr. Gambino, more specifically stemming from his interest in Poe since adolescence and the connection he feels to his stories.

“He’s always been one of my favorite writers and as a kid was one of the only authors who I ever got interested in reading more than one story,” Gambino said.

This love of Poe’s work inspired Gambino to retell them in a format not seen before. The attentive audience member may pick up on the variations, within both the plot and characters of each drama, as they veer off in ways differing from the original works.

“Usually when we get a show we watch videos of it, [with this] we had to go from our own mind to create our own characters,” actress Grayson Leslie (‘21) said.

As if creating an entirely original character wasn’t difficult enough, in order to best portray the mysterious nature of Poe’s works, each character required layers of emotional depth unlike that of many previous shows.

“This role completely differs from anything I’ve done before,” said actor Pete Cuddihy (‘21).  “This is my favorite role that I have played because of the amount of emotion this character has.”

Since the show had never been done before, it presented a unique challenge for the cast and crew since they had nothing on which to base their performance and design.

“We had to do a lot of research to look up what nurses wore during that time, what shoes men wore… but we were able to take our idea and run with [it] in which we haven’t really been able to do with other shows,” said Grace Helbrow, a member of the costume crew.

Not only did the production pay tribute to the many works of a renowned poet, but also allowed cast and crew members alike to express their own creativity and bring centuries-old works of literature to life. To some that may seem a daunting task, but the hard work and dedication put into the show by the production staff was evident. If you had any doubts apro-POE the future of the theater department at East, then doubt no more. Not only does the audience leave the theater with chattering teeth, but also with astonishing respect for the talent of the actors and some curiosity to delve into some of Poe’s works. In fact, sparking that curiosity was one of Gambino’s primary motivations for writing the show.

“It’s really a celebration of Edgar Allan Poe,” Gambino said.  “One of the reasons I love to read is because of him. If we could kind of give that to someone else it would be great.”

“Re-deranged: A Night of Poe” not only inspires curiosity, but also evokes one’s appetite for anything and everything that sends shivers down our spines, successfully accomplishing what those who worked on it wanted it to.